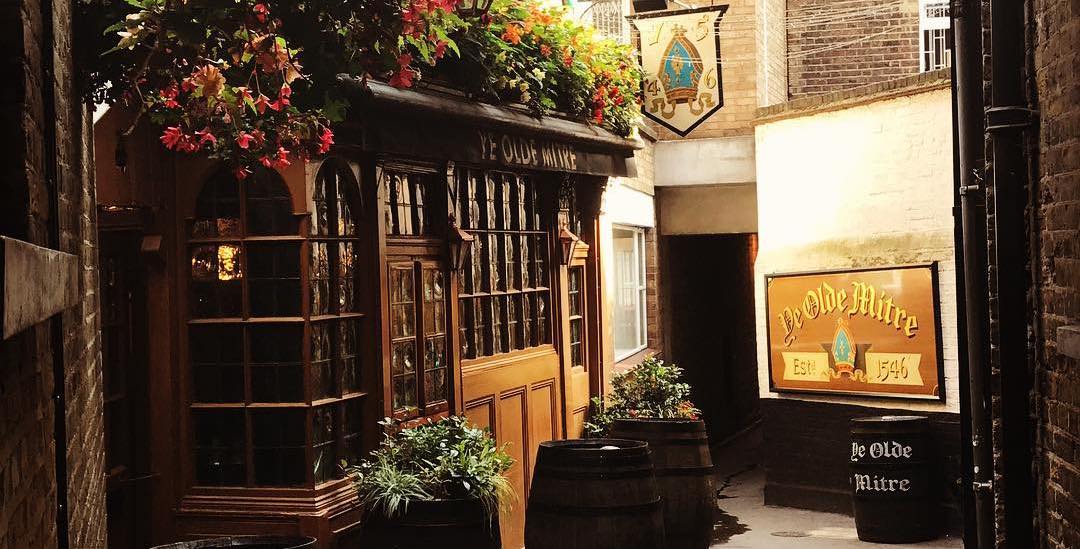 Aside from queueing, there are few things the British have perfected more so than the humble pub. Regardless of the season, weather, or situation, it’s the perfect time to prop up the bar with a pint and a packet of pork scratchings. So why not add a bit of history by drinking at one of the oldest pubs in London?

SEE ALSO: 15 Of The Oldest Pubs In The UK And The Fascinating Tales Behind Them

There’s no definitive answer to the question of which one is actually the oldest – the only thing anyone can agree on is that Charles Dickens patronised pretty much all of them. We’re of the opinion that it doesn’t much matter, as long as they’ve got an interesting story to tell! Here are thirteen you should sink a pint at, all you need to choose is your tipple of choice.

13 of the oldest pubs in London

Whilst the building itself only dates back to 1720, there has been an inn standing on this site since 1423, which warrants The Guinea a spot on this list. In more recent times, it’s become famous for the steaks served at The Guinea Grill. They’ll set you back a fair bit though, so maybe save the sirloin for next time?

Drink here and you’ll be following in the footsteps of literary luminaries such as Keats, Byron, and Dickens (we did warn you he got around!). It also achieved notoriety as the supposed birthplace and favoured haunt of highwayman Dick Turpin. Their seasonal menus are a winner, and the pub’s Tap Takeover is worth checking out too, as they rotate a selection of excellent craft beers throughout the year.

Not to be confused with an identically named, slightly younger pub in Farringdon, this establishment is one of the few timber buildings to have survived the Great Fire of 1666. Reportedly, the flames stopped only fifty yards from the door, which we think may have been a little divine intervention. Here’s hoping your pint is heavenly!

One of the smaller venues on this list, the Lamb & Flag can also claim one of the bloodier histories. The poet John Dryden was nearly murdered on this spot (albeit a hundred years before it was built in 1772), and in the nineteenth-century, regular bare-knuckle fights in the alley earned it an alternative name: ‘The Bucket of Blood’. Mercifully, things have quietened down since then.

Okay, so the current building is a replica built in 1920, but a pub has been standing here for almost six hundred years, so it’s still one of the oldest pubs in London. The Samuel Smith Brewery owns and operates this place, so you won’t get as much variety here. Having said that, the lower prices make up for it, and the Taddy lager is a crowdpleaser.

No other pub on this list can boast as impressive an architect as The Old Bell, which was built by Sir Christopher Wren for his masons, who were rebuilding St Bride’s Church after that pesky Great Fire. It’s not even the only pub he’s rumoured to have built, as nearby Ye Olde Watling (run by the same chain) also has a place in his portfolio.

Easily winning the prize for best-named pub on this list, Ye Olde Cheshire Cheese is not the place to go if you want to sit by a window and watch the world go by. Gloomy, and with almost no natural light, it’s more suited to imagining yourself as the lead in a Victorian crime thriller. We’ll take our pint with a side of murder and intrigue, please. The original pub here was destroyed in the Great Fire of London, but it didn’t take long for a successor to rise from the ashes (priorities, people!).

A land issue meant that this pub was technically part of Cambridgeshire until the early twentieth century, so the Mitre makes a slightly dubious claim to be London’s oldest. Still, Elizabeth I was rumoured to have danced round the cherry tree that once stood outside, so why not emulate her and have a boogie with your ale of choice?

9. The Prospect of Whitby, Wapping

The oldest riverside pub in London offers lovely views of the Thames – we’re sure that’s what used to draw the sailors and smugglers to the pub once known as ‘The Devil’s Tavern’. It’s been standing since 1520, and a reminder of its dark past can be seen with the noose and gallows that hang off of the balcony.

How many of the oldest pubs in London give you the opportunity to pick up free legal advice? The Seven Stars definitely will; it predates the neighbouring Royal Courts of Justice by the small matter of 280 years, and still plays host to crowds of lawyers at the close of day.

Having stood in one form or another since 1583, London’s last galleried inn has welcomed numerous famous faces. Shakespeare was a frequent guest, and his plays were performed in the courtyard for years. That courtyard remains one of the pub’s biggest draws, as you can sip G&Ts in the shadow of The Shard.

Unsurprisingly, this pub gets its name from the famous ship, which moored next door before sailing to the New World. If you can prove a family link to one of the voyageurs, why not sign their book of Mayflower Descendants? They also claim to serve the best fish and chips in London, but that’s definitely an argument for another time.

Dickens makes another appearance here, as The Grapes is supposedly the pub described in the opening of Our Mutual Friend. It’s another of our oldest pubs with a dark history, as unsavoury longshoremen reportedly drowned drunk patrons in the Thames – something the current owner, actor Ian McKellen, chose to gloss over in his history of the place. Monday is the day to visit, as the thespian has been known to run the pub quiz from time to time!

Dine on Deliciously Sustainable Food And Drink At Canary Wharf