They’re places where you can drink cocktails or a few pints, have a laugh, and forget about what’s going on in the world for an hour or two. Here’s our rundown of 16 comedy clubs in London that will have you laughing your bloody socks off:

1. Top Stand Up Comedy at the Seven Dials Club

Kicking off this list of the best comedy clubs in London is a real humdinger. Think top comedians (e.g. Jack Whitehall, Sara Pascoe) plus a top location (the Seven Dials Club in Covent Garden), minus the top price tag! Walk just two minutes from Covent Garden station, grab a drink in their lively bar, and take a pew for a night of belly laughs for just 16 quid. Now you can’t say fairer that right? Cop your tickets here.

2. South Ken Comedy Nights at The Hoop and Toy

The organisers behind this comedy club in London say that ‘you’re guaranteed to laugh until you cry’. Strong words there, but we believe them if we’re honest. Over the course of two hours, you’ll get to listen to a range of different comics who will be giving it their all and covering all kinds of comedy. The Hoop and Toy being a pub, there’ll also be loads of drinks on offer, and you can come on Tuesdays, Wednesdays and Thursdays, or stave off the Sunday fear with a comedy night on Sunday. What’s not to love? Buy your tickets here.

Slap-bang right in the middle of Holborn, this comedy night at The Yorkshire Grey is a real humdinger. Not only do you get an evening of side-splitting comedy, but tickets cost just four quid. No seriously – you’ll get two hours’ worth of comedy for just four quid. FOUR QUID! Ok we’ll stop banging on about this now, but at those prices, you can’t complain. Perfect for a night with mates or perhaps a first date spot?! We’ll leave that one up to you. Grab your tickets here.

It won’t be the first time you’ve seen many of the faces you will see on stage at Comedy Carnival, with award-winning, international comedians performing every Thursday, Friday and Saturday night. While the comedians will eventually have to call it a night, you certainly won’t, as you’re just a stone’s throw away from some epic bars and clubs. We’ll cheers to that! There’s also a sister version in Clapham which has seen the likes of Reginald D. Hunter, Paul Chowdhry and Milton Jones perform. Pretty good return on your mullah we say.

A firm West End favourite, The Comedy Store sees over 3,500 people pass through its doors every single week. They’ve come a long way since they first opened their doors in 1979 (comics no longer have to change in a cupboard or wee in a sink like they did at the Gargoyle Club). From topical news-based comedy on Tuesdays, to improv on Wednesdays and Sundays, all the way to the best stand-up Thursday to Saturday (and the odd open mic talent night on a Monday). Whatever kind of humour tickles you, The Comedy Store offers something for everyone’s taste! You can find out more here.

“The Backyard in Bethnal Green – if there’s a better comedy club in the world I don’t know where it is“. If the words of Russell Howard don’t speak for themselves, we don’t know whose will! Enjoy pool, table football and ping-pong at the largest professional, purpose-built comedy club in London, which has been the home of comedy in the East End for the past 20 years. Harry Hill, Dara O’Brien, Jo Brand, Alan Carr, Rhod Gilbert… quite frankly, the list is endless, so check it out for yourself. 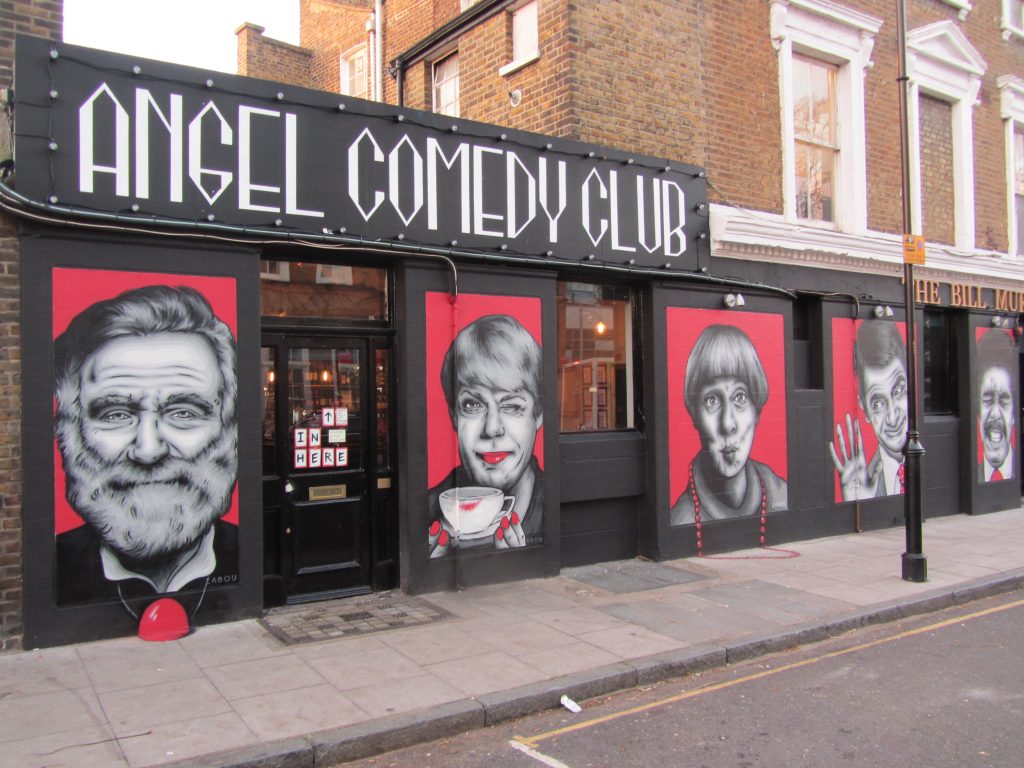 A comedian-run, crowd-funded comedy club: ‘2 venues. 7 nights a week. 100% funny.’ This club is in a pub and doubles up as a hub (we may not be humorous but we certainly are poetic). If you’re feeling funny, The Bill Murray provides a creative space for comedians to meet, write, rehearse and perform. And if you don’t have the gift – don’t worry, just come and laugh at all the amazing comedians that do! Many of their shows are FREE, but do arrive early to secure your seat (especially on weekends). Get involved here.

8. Bearcat Comedy at The Viaduct, Twickenham

“Without question one of the oldest, most respected and genuinely exciting comedy clubs in the world” – Omid Djalili

^ He said it 🤷‍♂️ – and who can argue with that? Find out more about Bearcat Comedy at The Viaduct in Twickenham here.

Keeping the prices low, the quality high and the club on the hush hush. It’s a Top Secret Comedy Club remember? Michael McIntyre, Ken Jeong and Robyn Perkins are just a handful of the names that have graced this stage. Book in advance because, as Jack Whitehall once said, “Top Secret is one of London’s best comedy clubs, it won’t be secret for long!” Get your arse down here pronto we say.

One of the oldest comedy clubs in Britain prides itself on creating the right ambience for each event and providing unbeatable value for money. With a capacity of just 100, it makes every comedy night an intimate one. Many of the biggest comedians have passed through the doors of the King’s Head, some of whom continue to perform there, so keep your eye out on their website.

11. The Stand Up Club at The Comedy Pub

Another banger of a comedy club here if we say so ourselves. The Stand-Up Club’s flagship venue – The Comedy Pub – is a Grade II-listed building, with four floors, three bars and a fab atmosphere, hosting award-winning comedy every weekend. What more could you ask for? Find out more here.

NOT to be confused with The Camden Head in Angel, this comedy night takes place upstairs at The Camden Head in, you guessed it, Camden. Their brand new programme is full of stand-up comedy nights, sketch and improv, new material, Edinburgh previews, and even workshops and masterclasses for the budding comedian. A lovely new refurb has made this an intimate, friendly little room, where comedy magic happens every day of the week! Get the lowdown here.

Laugh Train Home is known for hilarious comedy nights, a fun atmosphere and a bit of the unexpected. Joe Lycett, Seann Walsh, Josh Widdicombe, Reginald D. Hunter and Sara Pascoe are amongst the humorous heroes that have had crowds in stitches at The Honor Oak. Head down on a Tuesday for a good laugh! You can find out more here.

And now for something a bit different…

We all love laughing, eating, drinking and having a good time. So, what could possibly be better than a comedy brunch with added cocktails? This monthly event will have you splitting your sides, filling your bellies and dancing your socks off. Each brunch at The Steelyard will offer a carefully curated mix of comedians at the top of their game, with endless amounts of award-winning fried chicken and fries, with 60 minutes of soul-warming rum to add to the enjoyment. Nabil Abdulrashid, Aurie Styla, Eshaan Akbar, Maureen Younger, and Thanyia Moore have all played here before, so you’re definitely in for a good time with this one. You can book your tickets here. 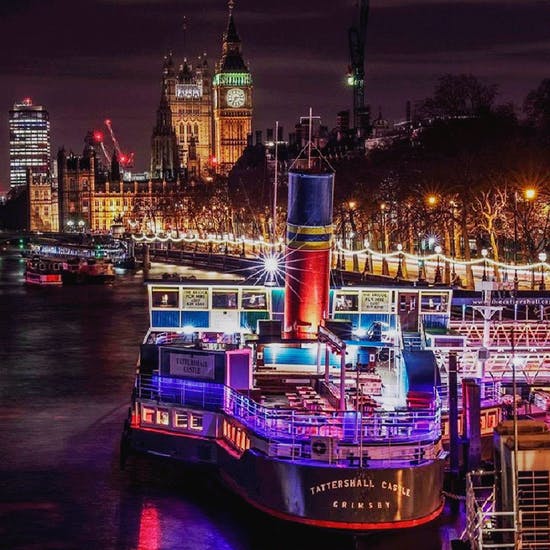 All aboard the Tattershall Castle for a laugh-out-loud evening of hilarious live comedy and beautiful riverside views! Their shows are a non-stop barrage of laughs, featuring the capital’s finest comedic talent, including regular TV names and cream of the crop of the UK circuit. As well as live music, there’s also a nightclub on board that keeps spinning until the wee hours – party on we say. Take a leap off the pier and jump on board for a laugh here.

Rounding off this list of the best comedy clubs in London is a real showstopper. Taking place in Waterloo’s lively and neon-bathed Bar Elba, you’ll get a killer house DJ, delicious food, fresh talent, lewd jokes and enough charisma to win over even the toughest of crowds. There will be two comedy acts on the bill, and did we mention that you’ll get bottomless prosecco, beer and spritz cocktails? Bottom’s up!

5 Reasons To Visit The Striking ‘Seeing Auschwitz’ Exhibition In London

21 Brilliant Things To Do In London Next Month