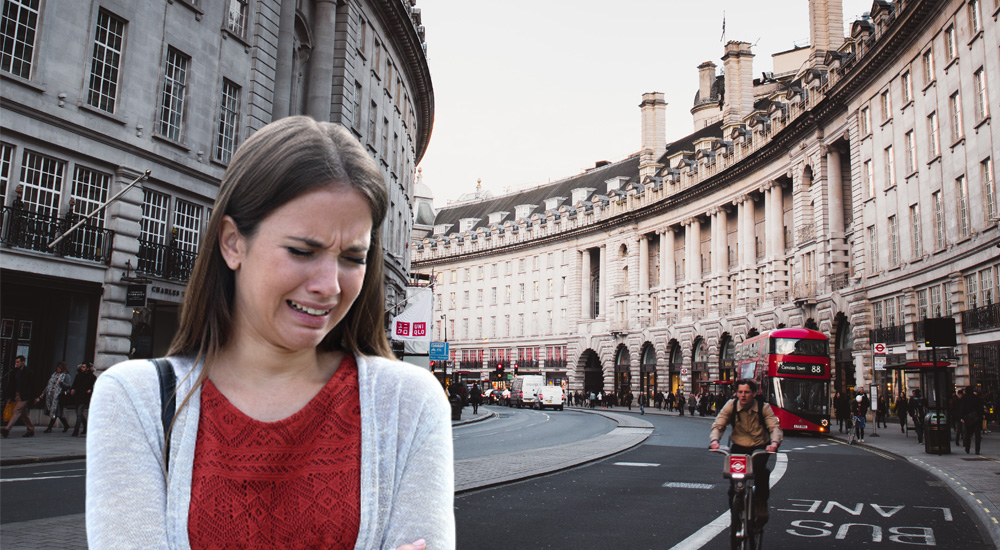 The ultimate crier’s guide to London.

I’m pretty well versed in the art of crying. It’s a habit of mine that I’ve truly mastered, especially at a certain time of the month. And with a diploma in Waterwork Management, I am entirely qualified to recommend the best spots in the city for a good old weep. Often, when the moment arises, the nearest appropriate spot is the office toilet (if you can even make it that far). But, next time you start to feel the tears bubbling to the surface, make your way to one of these spots for a sob.

This spot is ideal for a proper wail. It’s not entirely private, so you may be approached by sympathetic Londoners, but probably not. (It’s not that we’re not nice, it’s that we’re frightened of human contact.) St-Dunstan-in-the-East is also a great place to take moody photos to reflect your moodiness. So, next time you’re scheduling a cry, grab your headphones, blast out The Smiths, and head to this central London ruin.

Not the most glamorous place on this list, but it’s bound to happen one day. It’s free to piss and/or cry at London train stations now, at least.

Booze may be a catalyst for tears, but drunkenness is a good excuse. If you cry when you’re sober, it causes real concern. Crying after a few glasses of wine? Ah, he/she’s just drunk.

This was recommended by a colleague on the basis that you could just pretend that you’ve missed the bus. Solid advice, to be fair.

Perhaps a bit of a weird move, but you wouldn’t look out of place here, would you? Highgate Cemetery is a particularly perfect spot due to its many architectural gems that lend themselves well to hiding. The Terrace Catacombs are a particularly dark and dreary spot if you really don’t want to be found.

In my experience, I’ve found Uber drivers to be particularly good listeners. They might not give you a five star rating, but the £12.57 you spend getting home is certainly cheaper than a therapist.

If you feel like nothing’s going your way, take a trip to Kyoto Garden for some quiet tear-shedding and some serious chill time. There are waterfalls and flowers and peacocks and stuff – and what’s more zen than that?

If we weren’t in London, I’m not sure if I’d recommend this. But, honestly, we’re all far too absorbed in our own misery to notice anyone else’s, so your sobbing would likely go unnoticed. If you’re unfortunate enough to encounter an enthusiastic stranger, blame it on an audio book — they’ll probably leave you to it.

I had to include this, because everyone deserves their Bridget Jones moment. Whether you’re crying because your Mr Darcy is being arsey, or just because you’re verbally incontinent, Borough Market is an ideal spot for a dramatic cry, and then maybe a doughnut.

Where better to cry than in one of the most Instagrammable toilets in London? At sketch, you get a futuristic egg pod all to yourself, and you wouldn’t be mocked for thinking that you’ll come out a whole new, magnificently dry-eyed person. (Or perhaps the exact same person, just a thousand years later and on a different planet.)

Primrose Hill has everything you need for a top quality emotional breakdown: dramatic views and a large number of dogs.

For similarly dramatic vibes, take a stroll along the South Bank to feel as though you’re in a Richard Curtis movie. (Bonus points if it’s raining.) Bear in mind that your movie moment may well be immortalised in various tourist photos though, so wear your best clothes.

A gallery is a great spot for a cry because, if anyone catches you, you can claim that you’re just deeply moved by the art. The Tate was the obvious choice but, for the serial crier, here are some other London art galleries that you can work your way through.

There are so many benefits to this crying spot. The first and most obvious is that it’s pitch black, so nobody will see you. (Particularly helpful if you have a really ugly crying face.) Secondly, you’ll be fed delicious, mysterious food served to you by visually impaired waiters, so you’ll have plenty more to think about than how everything outside of the restaurant is all going to shit.

Just been dumped? Reading a really sad book? Due on your period? This beautiful spot is the perfect place for a cry. Besides being one of the most gorgeous spots in the city, it also has a lot of great places to hide. It’s a popular spot for photo shoots though, so try to avoid crashing any of those with your mascara-strewn face.

Take your pick of London’s loveliest lidos and jump right in. The trick here is simple: if you’re already dripping wet, nobody will notice a few tears.

Unfortunately this one only works if you’re feeling teary during the summer months, so you’ll have to time this one well. However, lavender is famous for its calming properties, so I expect this would be a pretty good place to let it all out and then let it all go.

The pollen count is probably pretty high so you can always blame our good friend Hay Fever, but also it’s full of emotional support animals.

Hammersmith Bridge: Grant Shapps says he is 'fed up with waiting' for council and Mayor to reopen crossing