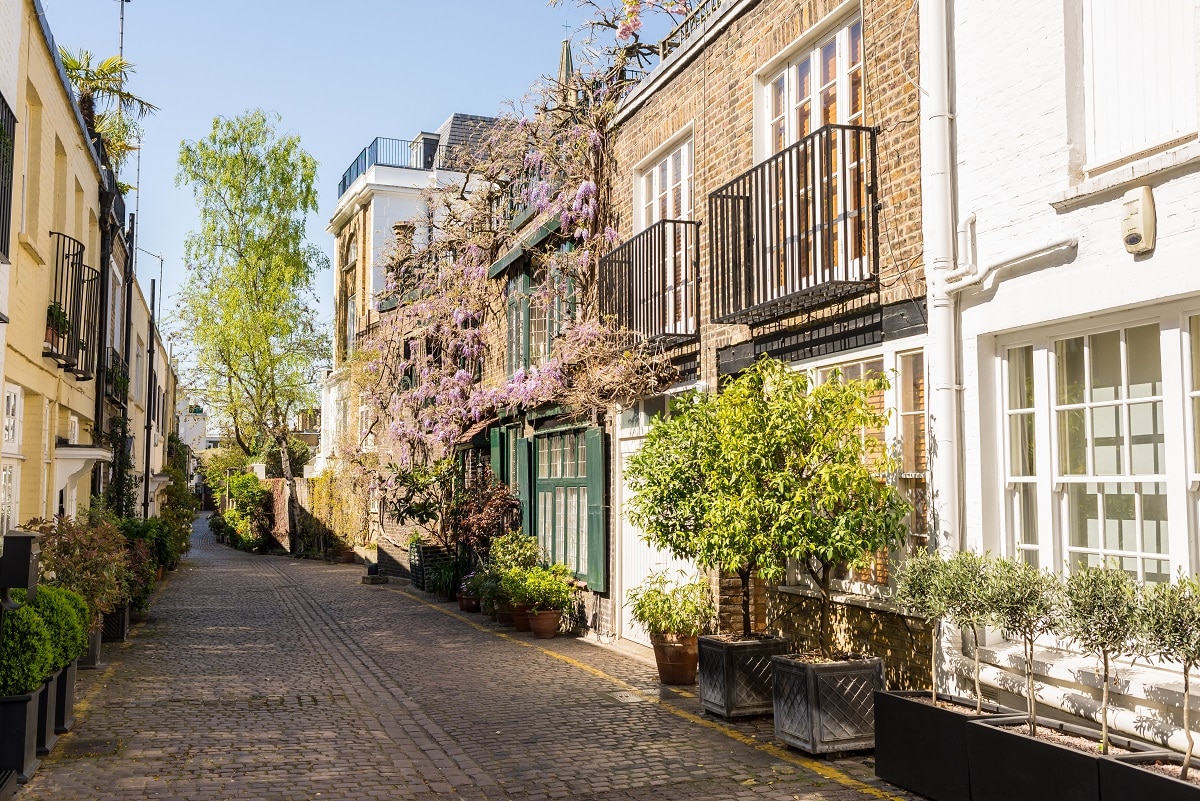 Fill your feed with cute houses on a tour of these beautiful mews!

Think of a typical London street, and one might come up with the major thoroughfares: Oxford Street, Shaftesbury Avenue, Piccadilly Circus. But step away from the shopping streets and into the the residential areas of West and Central London, and you’ll find a very different, altogether prettier alternative: mews.

Cobbled streets, gorgeous pastel houses, and a crowd of excited influencers is the surest way to spot the mews of London. They all began life with a different purpose though; wealthy residents of Chelsea, South Kensington, and Notting Hill had them built as stables and carriage houses, back when a horse-drawn carriage was the mode of transport for high society Londoners. The stables were built with living quarters above, so when cars, buses, and Tubes took over, they found new life as small but characterful houses.

As time has gone by, their quirky features, serene settings, and historic background has made them a desirable property; naturally, this means a mews house can regularly fetch a sale price of £2 million plus in 2021. And whilst we here at Secret London are unlikely to ever live here (barring a lottery win), we can certainly dream of it… In the interim, we’ll settle for a lazy wander around the prettiest mews in town. Here are a few of our favourites!

Of all the mews in London, Bathurst Mews is one of the few staying true to its traditional roots: the street is home to two of the last horse stables and riding schools in Central London, plus a tack shop for good measure. The arched entryways at either end are a little nondescript in comparison to others on this list, but once you’re in, you’ll have a a good chance of spotting some horses. Plus, it’s just a stone’s throw away from Hyde Park!

This tiny street is found directly opposite Bathurst Mews, and it’s certainly one of the cosier places we’ve featured. It’s the kind of place where you can actually imagine the neighbours might all be friends – or is that just us with rose-tinted glasses on?

Pretty pastel houses stretching the length of the street make this place a treat for the eyes. Easily the toughest decision you’ll have here is – given enough money, of course – whether you’d paint your mews house a warm yellow colour, or a bright blue. Hey, we can dream…

One of the most popular mews in the capital, this place becomes extra busy in spring when wisteria hysteria hits and part of the street explodes in a riot of purple. Kynance Mews would be effortlessly gorgeous even without the wisteria – the Grade II-listed arches aren’t exactly shabby – but the spring blossoms just kick the aesthetics into hyperdrive. Mind you, autumn isn’t exactly a bad time to visit, either…

Just around the corner from Bathurst Mews, you’ll find this street, which couldn’t really be much closer to Hyde Park if it tried. It’s quite a long street, so I’d peg the chances of a property coming up for sale a little higher than the others listed here. Mind you, since the average house price here is around £2.67 million, you’re going to need some serious savings to move in.

Mews attract the rich and famous, and Cresswell Place is no different, perhaps due to the fact that it looks like the kind of village you’d find squirrelled away in the Cotswolds or South Downs. Agatha Christie is the street’s most famous past resident, having lived at Number 22 during the 1920s. She even set her short story Murder in the Mews – a case solved by Hercule Poirot – on a street widely believed to be based on Cresswell Place.

Best known for an unforgettable appearance in Love, Actually featuring Keira Knightley, Andrew Lincoln, and a declaration of love that hasn’t aged especially well, St Luke’s Mews is unsurprisingly a firm favourite with film fans, influencers, and tourists. Whilst the whole row is enchanting, it’s Number 27 (the pink house) you’ll be looking for if you’re hoping to hunt down some film history.

Branch off of Gloucester Road next to the European Bookshop, and you’ll find a street where everyone appears to be on the same page. That’s because every single house has got the memo about decorating with flowers and shrubs, a commitment to aesthetics that may have landed the spot its part in 2015 film ‘Kingsman: The Secret Service’.

Tucked in amongst the embassies of South Kensington, Queen’s Gate Mews offers an escape from the business of Queen’s Gate. Best of all, the street boasts its very own pub, The Queen’s Arms – a handy stopping point for a well-earned pint before continuing (snag a seat by the open fire if you’re stopping by in winter). Visit here and you’ll be well-placed to strike out for the likes of Hyde Park, Kensington Gardens, the Natural History Museum, and the Science Museum.

There’s almost no escaping this one: if you follow any London Instagrammer, you’re almost certain to have seen the striking black façade before. The street itself is unsurprisingly cute, but unlike many of the other places on this list, the money shot here is found before you even enter.

Residents of Drayson Mews are well-positioned for a haircut, given that Number 1 is a salon! The rest of the street admittedly won’t be competing with Kynance and Holland Park for social media attention, but the smartly-kept houses will please architecture fans.

Located just off the grandly-titled Emperor’s Gate, this cul-de-sac is filled with charming little properties. Take Number 15, for instance, which has been completely wrapped up in ivy!

An impressive brick archway invites you towards this place, where the wisteria has been known to bloom plentifully come springtime. Which, coincidentally, is the time we start wishing we lived in a wisteria-draped house…

Another heavyweight on the Instagram scene, Holland Park Mews has been featured on screen in at least two films and remains utterly charming to this day, especially as it’s easily-accessed from nearby Kyoto Garden. Constructed in the 1860s and 70s, it’s one of the best-preserved examples in town, and beckons you in through the historic archway. The street is also distinctive from the rest on this list in that many of the houses are accessed by external steps – which have inevitably been co-opted for photoshoots…

Easily the quaintest name on this list, Adam and Eve Mews lies just off of Kensington High Street, a stone’s throw away from the (hopefully) soon-to-be reopened Kensington Roof Gardens. You’ll find plenty of red-brick houses here, bringing a different splash of colour to our tour.

These adjoining streets come as a pair, and you’ll know you’ve found them when you spot the giant ski mural upon entering the cobbled lane. The artwork is an Instagram favourite, but you’ll spot a smaller and less splashy tribute to its right: a painting of artist Francis Bacon, who lived and worked on Reece Mews for years. His former studio is at Number 7, and is marked with a blue plaque in recognition of its history.

Pristine white arches at either end give this spot a sweeping sense of grandeur, and the half-brick, half-painted facades are pleasantly uniform.

Tiny yet photogenic, Cornwall Mews South isn’t as well-known as some of our other dreamy streets, but the abundant plant pots and architectural features mean it rarely lacks for visitors.

Flying the flag both figuratively and literally for these adorable streets, the highlight here is the building festooned with a giant mural of the Union Jack. Until 2019, it was the boutique of famed fashion designer Alice Temperley, whose clients include the Duchess of Cambridge and Kelly Clarkson. A place in the heart of Notting Hill has one other key upside: the food. Your nearest food shop here is an Ottolenghi, and nearby Portobello Road, Ledbury Street, and Westbourne Grove are all lined with well-regarded restaurants.

Another two for the price of one deal! Look up Ennismore Mews from Ennismore Street and you’ll find the skyline dominated by the ornate tower of the Dormition Cathedral, a basilica-styled Russian Orthodox place of worship. But arguably the better-looking of the pair is nearby Ennismore Garden Mews, where the pastel-coloured houses are often ornamented with plants.

A world away from neighbouring Cromwell Road, Atherstone Mews has the cobbled street and colourful houses that by now you know are de rigueur for the capital. Residents here have been known to stray from the pretty pastels, though: stormy dark blue and vibrant yellow are just some of the colours you’ll find here.

A little oasis of calm just removed from the busy Earl’s Court Road. Many of the houses are artfully dressed with floral window boxes, and the cobbled street only adds to the old-school charm.

Meanwhile, here are some more of the prettiest streets in London. Or maybe you’d just like to gaze lovingly at some beautiful front doors?

You Could Get Paid £1000 To Test Bottomless Brunches, And It’s Basically The Dream Job