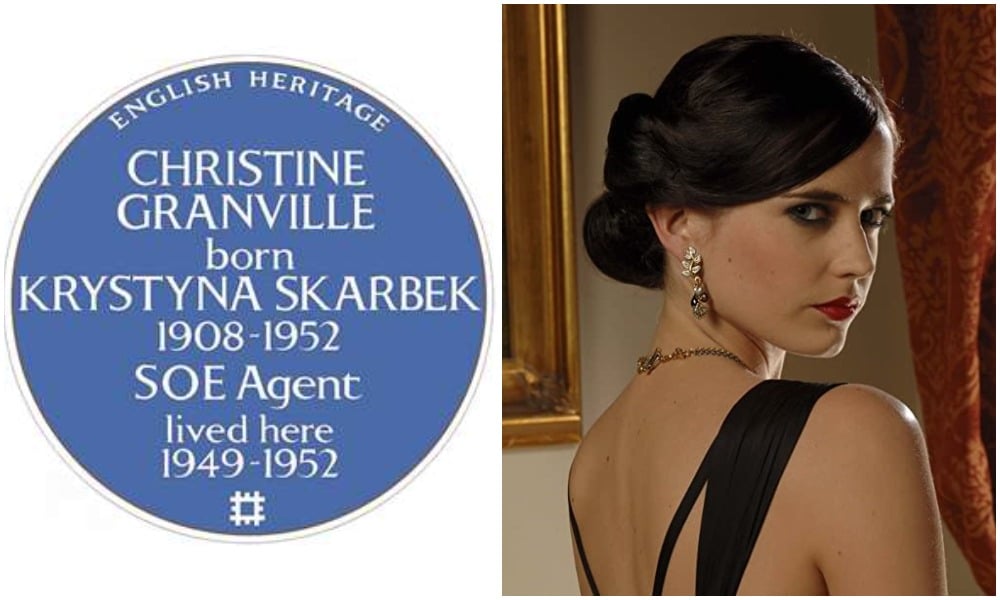 The amazing wartime exploits of Christine Granville have been immortalised with a blue plaque.

You wait years for a blue plaque honouring an incredible woman of WW2 to come along, and then suddenly you get two all at once. Just three weeks after a blue plaque commemorating the life and achievements of Noor Inayat Khan was revealed – the first blue plaque given to a female Muslim war heroine, no less – London has been enriched with another one, this time honouring the service of Christine Granville, the UK’s longest-serving female spy. [Featured image: English Heritage/IMDB]

Nice to see the incredible women of history getting the recognition they deserve, isn’t it? Granville, who was born Krystyna Skarbek in Warsaw in 1908, was the first female British agent to join Churchill’s Special Operations Executive – the same unit that Khan would later join – and became the longest-serving wartime female agent.

After joining British intelligence following the Nazi invasion of Poland, Granville quickly ingratiated herself with daring missions including smuggling intelligence reports out of Warsaw, escorting the evidence that proved Hitler was planning to invade the Soviet Union, helping plan a mutiny by Polish troops at an Alpine fortress, and charming and bribing Gestapo agents into releasing French resistance fighters in the last days of the war. All of which was enough to earn her a reputation as “Churchill’s favourite spy”, and lead to recognition including the George Cross, the French Croix de Guerre, and an OBE.

With the war over, Granville took a number of odd jobs, including as a waitress, a telephone operator, and a cabin steward on cruise liners. Sadly, her remarkable life was cut short in June 1952, when she was stabbed to death in Earls Court by a former colleague who’d reportedly become obsessed with her. Granville is buried in St Mary’s Roman Catholic Cemetery in Kensal Green, and you can visit her grave today, where she is buried with the ashes of SOE colleague and former lover Andrzej Kowerski (known also by his SOE name Andrew Kennedy).

As in the case of Noor Inayat Khan, the blue plaque isn’t the first memorial to Granville in London – some of her personal effects are on display at the Polish Institute in Kensington, and a bronze bust of her also resides at the Polish Hearth Club. The blue plaque owes a lot to the efforts of her biographer Clare Mulley (see her book The Spy Who Loved for more on Granville’s incredible life), who has campaigned for six years to bring this incredible woman the honour she deserves. However, long before any of these accolades, she was immortalised in literary form, having been the reported inspiration for the character of Vesper Lynd in Ian Fleming’s first Bond novel, Casino Royale; a part which was then played onscreen in the 2007 film by Eva Green.

You’ll find the blue plaque at 1 Lexham Gardens hotel in Kensington, which, in a previous life as the Shelbourne Hotel, was Granville’s London base after the war. Pop along today and pay tribute to one of WW2’s most incredible figures.