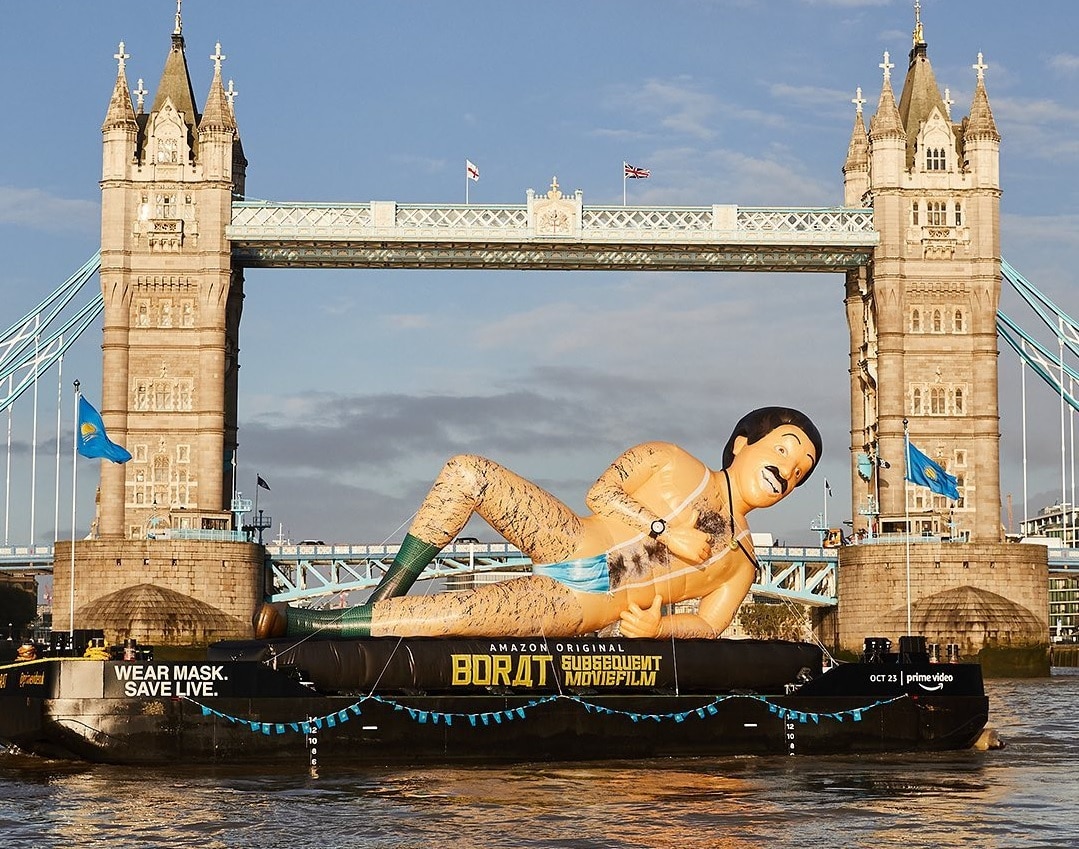 Sacha Baron Cohen’s Borat sequel, which has been making headlines recently for catching former NYC mayor and Trump confidant Rudy Giuliani in a rather compromising position, arrives on Amazon Prime tomorrow (October 23). But because it wouldn’t be a Borat film without outrageous, can’t-look-away publicity stunts, Londoners will see a huge blowup statue of the Kazakh journalist bobbing down the Thames later today. [Featured image: @primevideouk]

Somewhat uncannily, Borat is depicted in the very same position that London’s sexy Jeff Goldblum statue was a couple of years ago. Instead of wearing a dashing open shirt, however, our new art installation is clad in the on-trend garb of a face mask mankini, which you will be forever able to unsee (one can only guess at what he’d be wearing if face masks hadn’t become necessary this year…). Borat is currently moored on a barge on the eastern side of Tower Bridge, but at 2pm, he’ll begin his slow cruise down to the London Eye and back, there to give unsuspecting Londoners an eyeful of bare-chested masculinity.

Borat’s likeness was also beamed onto the side of the Tower of London last night, which probably wasn’t in the script when William the Conqueror had it built, but did give Amazon Prime the chance to crack wise about a second pair of “Crown Jewels”.

Michelangelo’s David it most certainly is not, but there’s no denying that it’s an attention-grabbing publicity stunt. Head on down to the South Bank around 2ish to see the unforgettable show, and please don’t blame us if it pops into your nightmares tonight…

It’s still not the weirdest inflatable we’ve seen in London though – remember the Trump baby balloon which took to the skies in 2018?

A Month-Long National Lockdown Is Rumoured To Start Next Week