We’ve come up with plenty of suggestions to improve the Tube, but the plucky folks at Transport for London have gone straight for the big cheese: Bank station. Over the past four years, renovation works have sought to untangle the web of corridors, escalators, and platforms that so entrap commuters, and work is scheduled conclude later in 2022. However, before that point has come a rather drastic development: the closure of the Northern line on the Bank branch, between January and mid-May 2022.

SEE ALSO: The Northern Line Has Extended To Battersea With A Pair Of Shiny New Stations 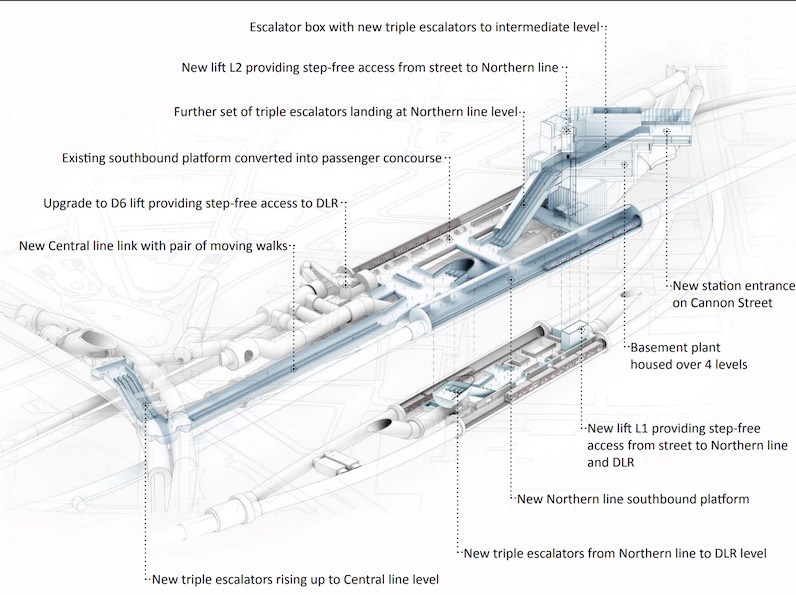 TfL recently revealed that the closure has passed the halfway mark – so what exactly is happening at Bank station? As you can see from the above diagram, there’s been plenty to do these past four years, including excavating 200,000 tonnes of material from under the City of London to fit everything in. Once works are completed, the station will boast 40% more space – a godsend for commuters who’ve been swept through the tunnels on a wave of morning foot traffic.

There’s also a glittering new entrance on Cannon Street that’ll whisk you straight down to the Northern line, along with two new lifts, two new moving walkways (connecting the Northern and Central lines), and twelve new escalators, which will provide the Northern line and DLR with step-free access.

Finally – and most impressively – the plan (which I firmly believe should have been codenamed “the Bank heist”, just FYI) requires the southbound Northern line to be shifted slightly to the west. Naturally, you can’t do this overnight, hence the closure of the line between Moorgate and Kennington for seventeen weeks, taking us right through to mid-May, and the proposed end of renovation works. It was originally planned for spring and summer of 2020, but the pandemic threw a spanner in the works. By the end of March, workers had successfully connected the new tunnel to the existing railway line, and begun converting the old southbound platform into a new concourse. 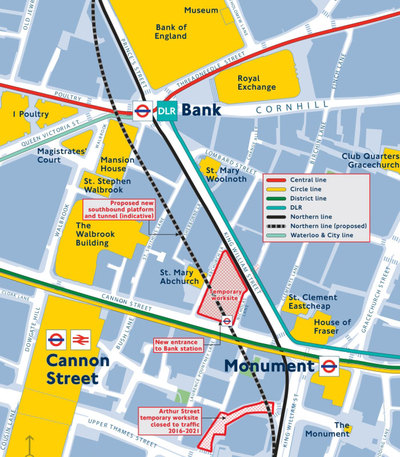 During the closure, there are no Northern line services at four stations: Bank, London Bridge, Borough, and Elephant & Castle – all these stations except for Borough connect to other lines, meaning you’ll still be able to access them. There are fewer services between Camden Town and Moorgate, although to compensate, TfL are running more frequent services on the Charing Cross branch of the line, and have unveiled a temporary bus route: the 733, which will run from Oval to the City. TfL’s dedicated webpage has suggested a few alternative routes for passengers to take.

The transformation of the old southbound platform into a new, wider concourse for the Northern line is admittedly a mercy for anyone who’s picked their way along the existing platforms during rush hour. The line closure will also give Underground staff time to ensure that things are running smoothly, and of course check that the renovation works haven’t foolishly awakened any slumbering demons left undisturbed for millennia. Good luck!

Once the Northern link reopens in May 2022 (a date that’s still tracking to schedule), the Bank renovation will reach the final stage of completion. The final steps are to add step-free access to the Northern line, open that Cannon Street entrance, and finish the interchanges between the DLR, Central, and Northern lines, all of which is set to conclude by the end of 2022. Overall, the renovation will increase capacity by 40%, and a TfL press release states that this will “help to address long-standing capacity issues at the station” – which is code for ‘making this place less of an impassable labyrinth’. It may even have the breathtaking possibility to put an end to jokes like this, which we’re fully not prepared for…

We’ll see what happens when the new and improved Bank station is introduced to the world come May. In the meantime, you’d best plan a different route to work for when that Northern line closure arrives, and prepare yourself for a brave new world where Bank might not be the unknowable mystery it’s long been…