Don’t call it a comeback.

When you shuffle out of Mornington Station crescent, it’s hard not to be struck by one of London’s historic music venues as it towers over the streets of Camden.

But for the best part of three years, KOKO’s doors have been fastened shut to the usual punters lining up to to enjoy their usual roster of theatre and live music. In Spring 2022 that’s all going to change, as its state-of-the-art glow up is finally revealed to the public.

Since its closure, it hasn’t been an easy ride for the beloved venue — which has previously housed artists like The Rolling Stones, Prince, and Camden-local Amy Winehouse. They initially hoped to remain closed for refurbishment for a year, but a fire breaking out at the site in 2020, followed by the Covid pandemic and “colossal water damage” ended up threatening the venue’s existence.

None of that was quite enough to stop the glorious comeback, and you’ll be seeing the doors fly open for events in the springtime, in a revamped 50,000 square-feet space. The Grade II listed theatre now boasts a hefty four storeys, with a swanky new media space for artists and musicians, allowing them to “co-produce, stream and distribute their music to a global audience with the newly formed KOKO Studio”. 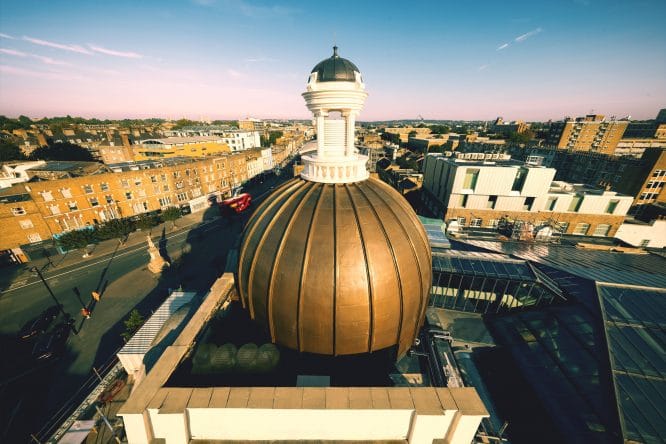 Moreover, an entire new experience will be offered to the public. Expect a late-night pizzeria, a tap-bar hosting live performances, plus their mind-melting new “Fly Tower venue” and gallery, where artists can even perform on a unique 360-degree stage. Plus, their new membership scheme offers access to, *deep breath*, their stunning roof terrace; a quirky new dome cocktail bar; a penthouse and recording studio; piano room; library; hidden speakeasy; a stage kitchen; and vinyl rooms. Whew, not bad.

CEO and Founder Olly Bengough said: “After three long and epic years of construction and restoration, I’m excited to announce that we will be returning KOKO to the musicians, artists and fans next spring with a beautifully restored theatre and live music offering that will hopefully be a truly unique and unparalleled experience for everyone coming through the doors.

“We are as committed as ever to protect our 120 year cultural legacy and to support the next generation of musicians and London’s dynamic and ever growing music scene. We look forward to welcoming everyone back to KOKO in Spring 2022.”

Following these unprecedented delays, the modernised space will include features that draw on a futuristic element of live music: streaming. KOKO has revealed plans for “high-spec streaming capabilities integrated throughout [the venue]”, alongside their aim to “deliver an unrivalled experience for live music fans”.

KOKO is a venue doused in history, having opened as the Camden Theatre in 1900 and hosting none other than Charlie Chaplin in their updated Camden Hippodrome guise in 1909. It’s changed identity and names multiple times before, and this new era of the KOKO is a tale of the survival of one of London’s great venues that demands be celebrated. You’ll just have to wait a little while longer to do exactly that.

KOKO is due to reopen at 1A Camden High Street in Spring 2022.