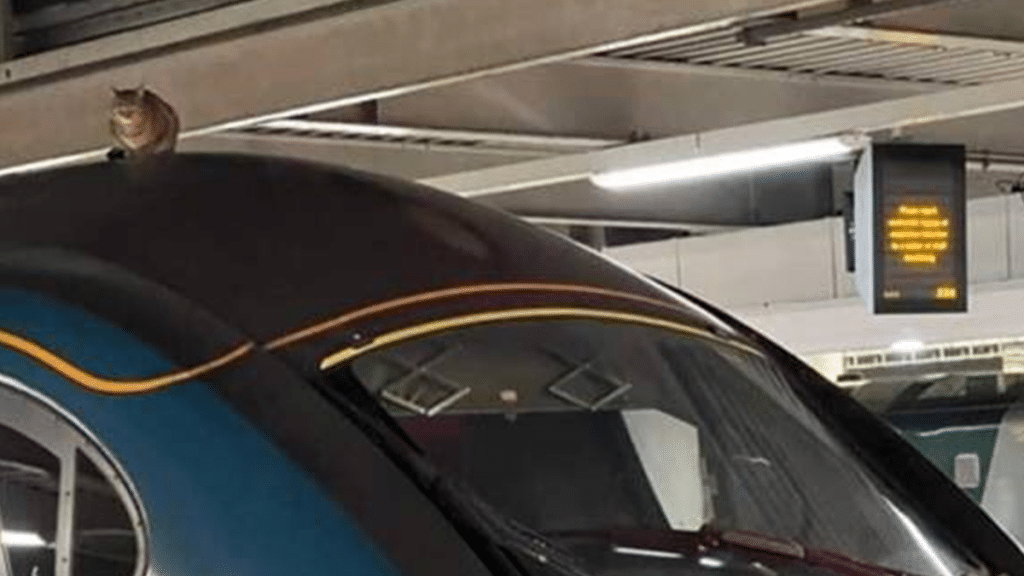 An oblivious cat unknowingly attempted a great escape from the capital yesterday, finding a comfy spot upon an Avanti West Coast train that was scheduled to depart Euston for Manchester. Little did the fluffy bugger know, it caused quite a bit of havoc for both station staff and travellers – with the train taken out of service and passengers switched onto a hastily-arranged new train, whilst service while staff attempted to coax the kitty back down to safety. I would probably take that as a sign to never leave the greatest city on Earth, rather than slogging it all the way to Manchester, but that’s just me.

Kitty is now safe and well so it’s time for a caption competition. GO! pic.twitter.com/OoZ7gArTRp

Luckily, curiosity (or the train’s power lines) didn’t kill the cat, and after over two hours of trying, staff managed to get the cat to willingly hop down onto a bin, before scrambling away to presumably cause more mischief around London town. Where this enigma of a feline ended up, we do not know.

Speaking of the incident, Joe Hendry, Network Rail station manager for Euston, said: “We often have to deal with birds inside the station but in all my time here this is the first train surfing cat!

“Thankfully curiosity didn’t kill this cat and we’re glad it avoided using up one of its nine lives thanks to the swift action of the station team and Avanti West Coast staff who organised for passengers to get onto a different train for the rescue to take place.”

Kathryn Pranga-Wells, lead station manager for Avanti West Coast, added: “The things some pets do to avoid lockdown. Thankfully we managed to avoid a cat-astrophe but don’t ask me-ow the cat got up there.”

It’s not the only animal causing mischief; Lladudno’s invading mountain goats are back with more shenanigans.

London Covid cases by borough revealed: Some areas see infections rise by more than 50% in just a week

There are many times in one’s life – like this very Friday, for example – that only a will do. So, it’s a good thing that, here in London, we happen to have the third best offering in the whole of Europe. Well, outside of Italy, that is. Yes, , and it’s pretty good reading […]
The post This London Pizzeria Has Been Named The Third Best In Europe* appeared first on Secret London. Secret London …

Six people have been admitted to hospital after a bus crashed into a wall in east London on Wednesday afternoon. Evening Standard …

There’s something in the air in East London. Semolina, perhaps? How else to explain the absolute explosion of amazing sandwich and sub places over the past two years? Here’s one more sub place you have to check out on your – if you can bear to tear yourself away from one of your seven other […]
The post This Railway Arch Serves The Messiest Sandwiches In London • Mat & Jack’s Fat Subs appeared first on Secret London. Secret London …