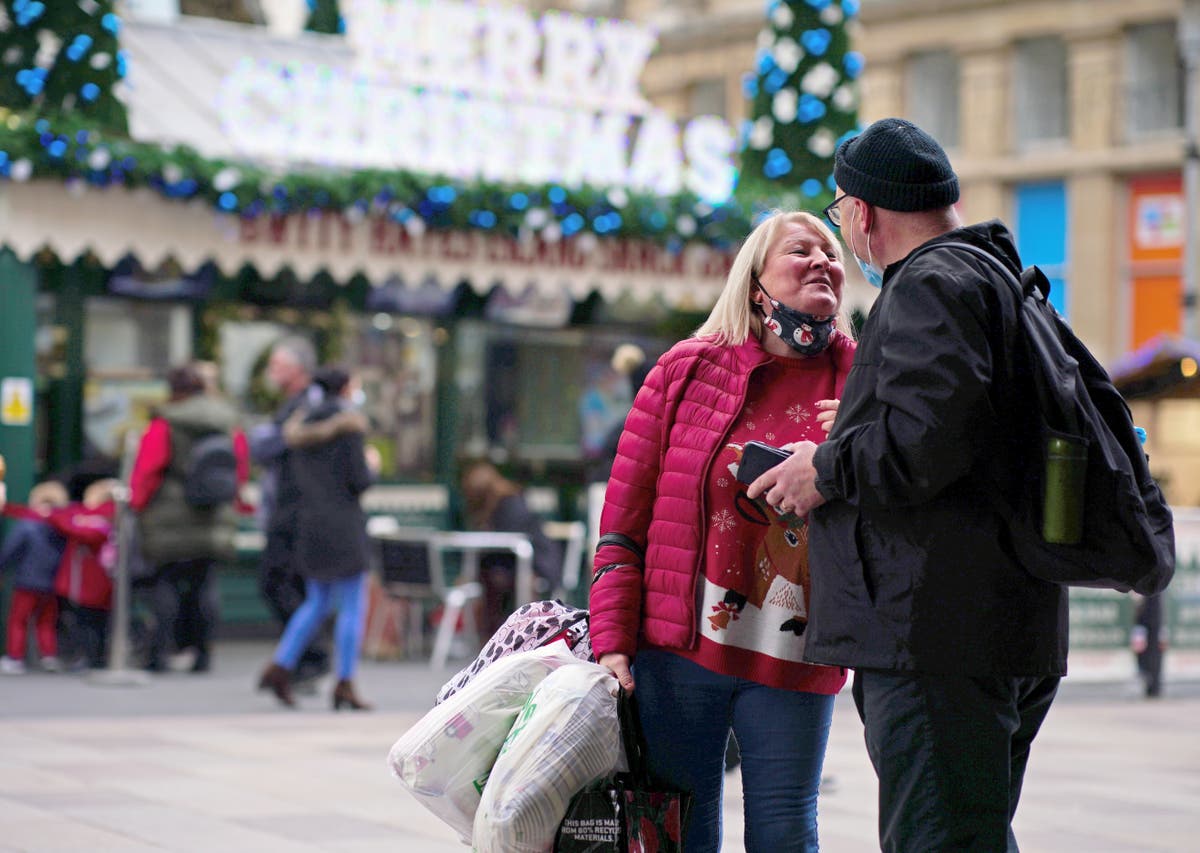 eople across the UK should have a “cautious” Christmas, according to a Government minister who has changed his own plans.

Steve Barclay said: “We are saying to people that they should continue with Christmas but do so in a cautious way. That is what I will be doing with my own family.

“We can all protect our families and friends by having the booster.”

The Prime Minister didn’t reveal any new curbs on Monday but pledged to recall parliament if he decides to implement further restrictions, a process that takes 48 hours.

Meanwhile, health secretary Sajid Javid is understood to want to cut the isolation period from 10 days to seven to combat the number of NHS staff off work with Covid.

Sir Jeremy Farrar, a former member of the Scientific Advisory Group for Emergencies, has told the Today programme “each of us can do things today that will make the chance of further restrictions lighter”.

He added: “Omicron is spreading unbelievably fast. It is a phenomenal variant transmission.

“My personal view is that I think we can wait at the moment until there are more restrictions formally placed.”

Have yourself a very cautious Christmas – Minister

People across the UK should have a “cautious” Christmas, according to a Government minister who has changed his own plans.

Steve Barclay told LBC he had downsized the number of family members at his Christmas celebrations this year, with only his in-laws attending.

The Cabinet Office minister said: “We are saying to people that they should continue with Christmas but do so in a cautious way. That is what I will be doing with my own family.

“We can all protect our families and friends by having the booster.”

When asked what a cautious Christmas is, he added: “I think it is thinking about how many people we need to see. Some of my family won’t be coming over at Christmas. My wife’s parents will be joining us but others will not.”

When asked about measures to help businesses struggling this Christmas due to Covid restrictions, Cabinet Office minister Steve Barclay told BBC Breakfast: “The Chancellor was talking to industry leaders about this very issue last night. We will say more about this later today.

“We recognise obviously we are keen to keep businesses open and businesses should continue to plan for the bookings they have.

“We absolutely recognise that through Plan B and the behaviour change there has been an impact on those bookings.”

Donald Trump was booed by some of his supporters as he admitted to having received a COVID-19 booster jab.

In a video shared by Bill O’Reilly’s “No spin news” Twitter account, Mr Trump can be heard discussing the vaccine with the former Fox News host.

Mr O’Reilly says: “Both the President and I are vaxxed.”

He then asks his guest: “Did you get the booster?” to which Mr Trump replies “Yes.”

Members of the audience can immediately be heard jeering in response to the admission.

Jamie Dornan says his father told him he was proud of him every day before his death after contracting coronavirus.

Jim Dornan, a prominent obstetrician and gynaecologist, died during a routine knee operation after testing positive for the virus.

Speaking to The Times, Dornan, 39, said it was “brutal” that his father could not have seen his latest film Belfast, which comes out in January.

“It’s been a brutal aspect of this whole journey. For my dad not to be able to see this movie hurts,” he said.

Covid isolation expected to be cut to seven days

The Covid-19 self-isolation period is to be cut to seven days in a move that may save Christmas for thousands and ease NHS staff shortages.

Health Secretary Sajid Javid has been pushing for people to no longer have to isolate for ten days if they get negative lateral flow tests on day six and seven.

WHO issues Omicron warning before holidays: ‘An event cancelled is better than a life cancelled’

The World Health Organisation has urged people to cancel some of their holiday plans to protect public health as the Omicron variant spreads.

Omicron is spreading faster than the Delta variant and is causing infections in people already vaccinated or who have recovered from the Covid-19 disease, the world health body warned on Monday.

“With the numbers going up, all health systems are going to be under strain,” WHO chief scientist Soumya Swaminathan told Geneva-based journalists, stressing that it would be “unwise” to conclude from early evidence that Omicron was a milder variant that previous ones.