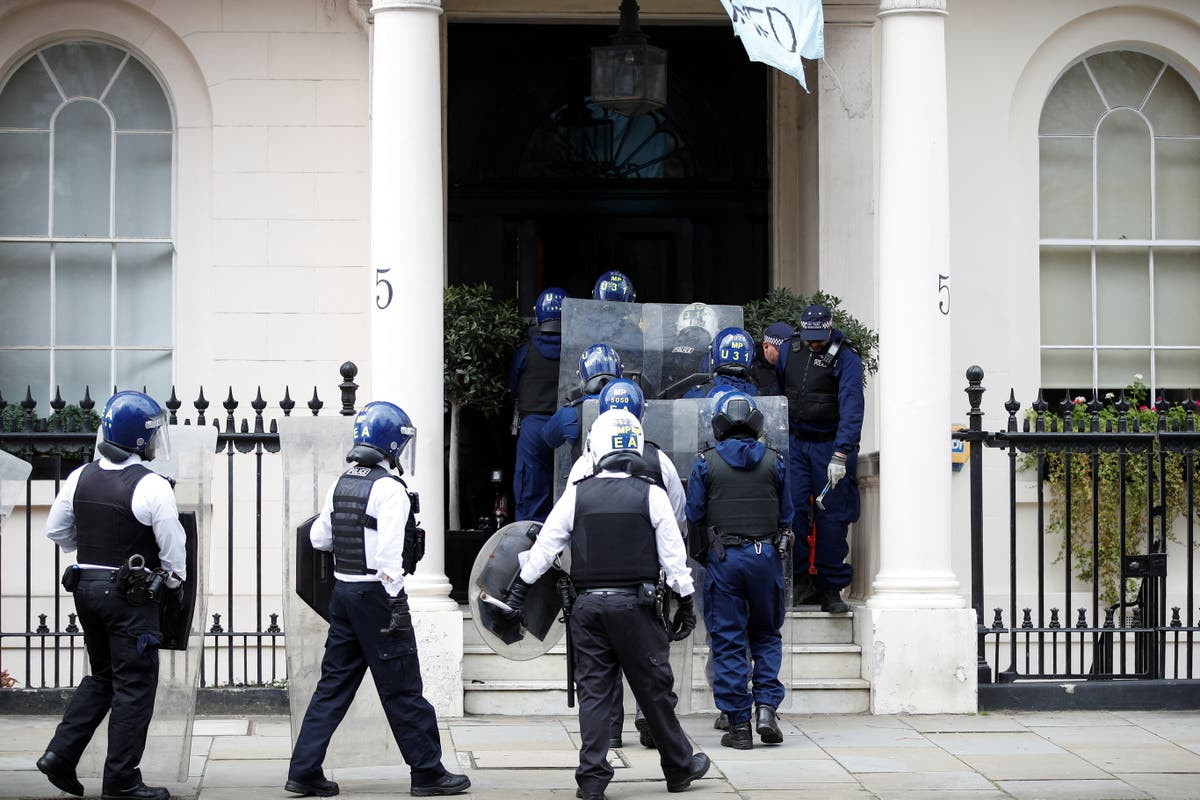 olice have arrested four protestors who took to the balcony of a Belgravia mansion said to be owned by a Russian oligarch after it was taken over by a group of squatters.

Activists broke into 5 Belgrave Square just after midnight before hanging Ukrainian flags and banners reading: ‘The property has been liberated’ and ‘Putin go f*** yourself’.

Officers were called to the property at 1am on Monday following reports that a group of people had gained entry.

The group said it had occupied the mansion to show “solidarity with the people of Ukraine”. It said it wanted to use the property as a refugee centre.

Pictures showed officers in riot gear entering the property around lunchtime on Monday. No people were left inside the property at the time but four people still remained on the balcony, police said.

Police said at the time: “Officers have completed a search of the property and are satisfied there are no people left inside.

“We continue to engage with four people on the balcony as we balance the need for enforcement with the safety of all involved.

“We remain at the scene and are considering the appropriate next steps given the large and complex nature of this property.”

Hours later on Monday evening police said the protestors had come down and been arrested.

A Met spokesperson said: “ The four have been arrested under section 144 of the Legal Aid, Sentencing and Punishment of Offenders Act 2012. A police presence will continue at the scene.

The Met said a further four protestors had been arrested “after they attempted to gain access to the row of buildings where the protest was ongoing in Belgrave Square. They have been arrested under section 9 of the Criminal Law Act 1977.”

All those arrested remain in custody and the protest had concluded, the Met said.

The mansion is believed to belong to the family of Oleg Deripaska, one of seven Russian oligarchs to be hit with sanctions by the UK to punish allies of Vladimir Putin over the invasion of Ukraine.

The six-storey Grade I listed property on Belgrave Square was bought for an estimated £25m in 2003.

Once one of the richest men linked to President Putin, Deripaska has made billions from his shares in Russia’s aluminium industries, including En+ energy group which he founded.

He owns several properties in the UK worth millions.

Deripaska has been subject to US sanctions since 2018 over alleged links to the Russian government, including allegations of cyber-attacks and election meddling.

He called the claims “a lie”, saying: “The idea that I am some kind of ‘’Kremlin operative’’… is clearly idiotic nonsense.”

Unlike many sanctioned oligarchs Deripaska has been vocal about his view on the war, taking to social media to call for peace.

“I remain committed to my belief that an immediate ceasefire and peace agreement as soon as humanly possible is the best and only solution to stop this madness in Ukraine,” he wrote on Twitter.

Meanwhile, Downing Street confirmed it was examining whether the properties of sanctioned oligarchs could be used to house Ukrainian refugees, although it is thought new legislation would be required.

The Prime Minister’s official spokesman said: “Certainly that’s something we are looking at.

“I think in the first instance the two (visa) routes that we have are how we expect people will be housed in the UK, either through family or through this sponsorship route.”

In response to squatters taking over Oleg Deripaska’s London mansion, the spokesman said: “Squatting in residential buildings is illegal.

“But we are working to identify the appropriate use for seized properties while owners are subject to sanctions.”

Downing Street did not rule out Chelsea Football Club’s hotel being used to house Ukrainian refugees.

The Prime Minister’s official spokesman said: “We would certainly want to see wherever is possible (used), we are open to all options.

“There are some challenges around the special licence that his been created in relation to the sanctions.”

But “by and large the vast majority of people” coming from Ukraine would be housed under the two routes already announced.

Chris Kaba: Firearms officers did not threaten to walk out after shooting, says Met Commissioner