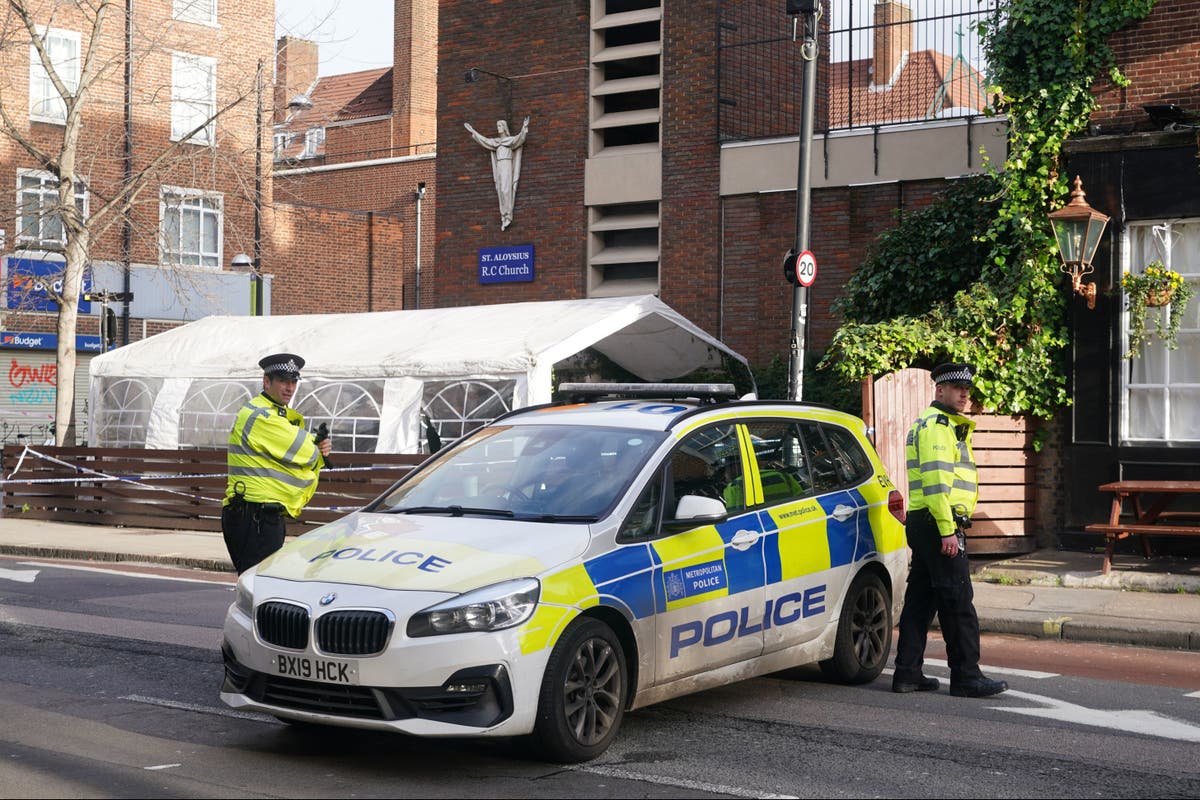 seven-year-old girl was “seriously injured” by shotgun pellets fired from a black Toyota in London, police have said.

Officers were called to St Aloysius Church on Phoenix Road in Euston on Saturday where a memorial service was taking place for a young woman and her mother.

They believe the gunmen fired a shotgun from a Toyota C-HR at around 1.30pm before driving off.

Four women and two children were injured in the attack, with the youngest left in a life-threatening condition.

He added: “Four women, aged 21, 41, 48 and 54, were taken to central London hospitals. Thankfully their injuries were assessed as non-life threatening. The 48-year-old woman has sustained potentially life-changing injuries.

“Two children were also injured. A 12-year-old girl sustained a leg injury. She was treated at hospital before being discharged yesterday afternoon. She is expected to make a full recovery.

“A seven-year-old girl was more seriously injured. She remains in hospital in a stable but life-threatening condition, and our thoughts are with her and her family.

“We believe the suspects discharged a shotgun from a moving vehicle, which was a black Toyota C-HR, likely a 2019 model or similar.”

The shots sent mourners running and screaming, with many of them sheltering inside the church, witnesses said.

Father Jeremy Trood, who conducted the service, confirmed it was a Requiem Mass for Sara Sanchez, 20, and her mother, who both died in November.

Ms Sanchez suffered from leukaemia for three years before succumbing to the disease after her mother died suddenly from a rare blood clot on arrival at Heathrow from Colombia, MyLondon reported.

Father Trood said: “I was inside the church. I heard the bang and people ran back into the church. They knew something had happened outside.

“They were very scared, people sheltered in the church until the police said they can leave but some of them were so scared they had to wait a while to get their confidence back up to go outside.

“But I was in the church the whole time so I didn’t actually see what had happened.”

One resident of an estate across the road from the church, who did not want to give her name, said: “I heard the gunshots.

“I was having a quiet day on my balcony and I heard this almighty bang and I thought this was not normal, and the next minute everyone was screaming and shouting.

“We have a food bank there and everyone was running off. Neighbours came in and said there has been a shooting. What a terrible thing.”

Police are now searching for the attackers, with the Met’s Specialist Crime Command leading the investigation, Supt Rowlands said.

He added: “People came here to attend a funeral, to be with friends and loved ones and mourn together. Instead, they were the victims of a senseless act of violence.

“We know it would have had a significant impact on communities across Camden and we will have a visible police presence in the local area in the coming days and weeks to provide extra reassurance, and as your neighbourhood superintendent I will ensure that will be happening.”

Mayor of London Sadiq Khan said: “This is a deeply distressing incident and my thoughts are with those who were injured and their families.

“A police investigation is now under way and I am in close contact with the Met Police to determine what happened.