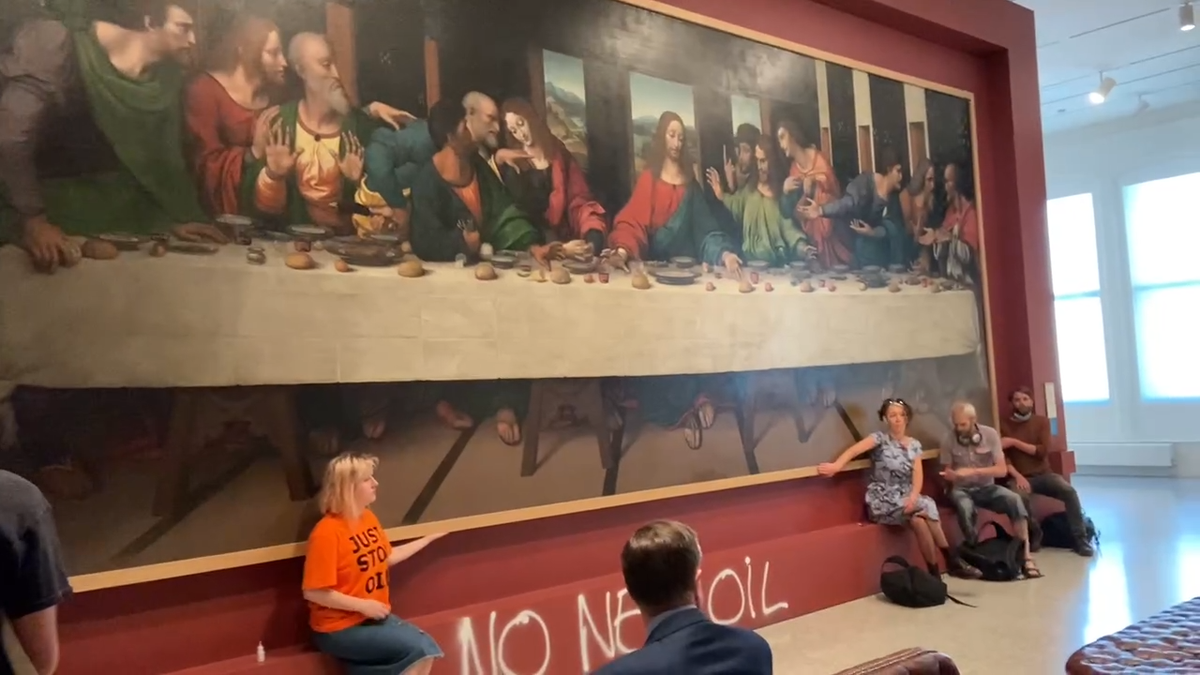 It comes after two Just Stop Oil eco-warriors glued themselves to the frame of a Constable painting The Hay Wain, at the National Gallery on Monday night, and is the fifth time in the last week that protesters have glued themselves to a major artwork.

The group is calling on the Government to halt new oil and gas licenses in the UK.

In a statement, Just Stop Oil said it’s “calling for the government to commit to immediately halt new oil and gas licenses in the UK and for the directors, employees and members of art institutions to join the Just Stop Oil coalition in peaceful civil resistance”.

Four protesters sat on a bench under the full-scale copy of Leonardo da Vinci’s famous painting, attributed to one of his pupils Giampietrino, on Tuesday.

The words ‘No New Oil’ were spray painted below the painting.

Met Police said officers were called to Burlington House, Piccadilly following reports that protestors had glued themselves to artwork.

Three men and two women were arrested on suspicion of criminal damage. They remain in custody, the Met said.

The Last Supper depicts the last time that Jesus sat down and ate with his apostles before he was crucified.

“We must halt all new oil and gas right now. We will stop disrupting art institutions as soon as the government makes a meaningful statement to do so,” said former primary school teacher Lucy Porter.

A community organiser from Swindon, Tristan Strange, said: “We are continually fed comforting lies that downplay the urgency of the climate crisis we face so that fossil fuel interests can continue to reap huge profits.”

On Monday two students glued their hands onto the frame of a Constable painting at the National Gallery in London after covering it with a reimagined version.

Meanwhile six Just Stop Oil protesters were charged over the track invasion at the beginning of the Formula 1 BritishGrand Prix at Silverstone on Sunday.

All six appeared at Northampton Magistrates’ Court on Tuesday morning.