Celebrations for the Lunar New Year in London are the biggest in the world outside of Asia, with people usually flocking in from all over the UK and from around the world. Unfortunately, festivities have had to be rather scaled back this year due to the uncertainties surrounding COVID-19 (thanks once again Omicron).

However, that doesn’t mean that you can’t ring in the ‘Year of the Tiger’ without some form of celebration. Here’s our roundup of some of the best things to do in London to celebrate this Lunar New Year. And yes – it does involve a hell of a lot of eating and drinking. After all, that is the Secret London way… 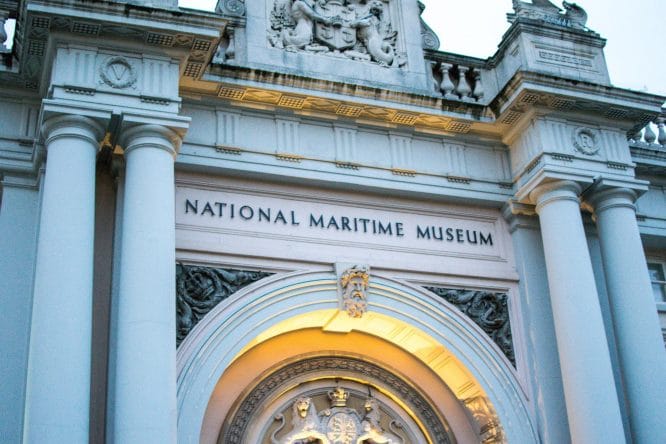 This fascinating (and free!) spot in the UNESCO-listed borough of Greenwich is interesting enough anyway, but throw in the Lunar New Year celebrations they’ve got going on this year, and you can dial that up to a hundred. On Saturday January 29, the museum will be hosting a full day of celebrations in collaboration with the Newham Chinese Association, the Vietnamese Women’s Group and Global Fusion Music.

Events on offer include a tea ceremony demonstration, a lantern-making workshop and a chance to learn the ancient Chinese practices of Tai Chi and Qigong. Tickets are free, but you’ll need to make sure you book ahead. Grab your tickets here then maybe visit some of SE10’s restaurants?

2. Celebrate with a slap-up ‘Year of the Tiger’ meal at Hutong 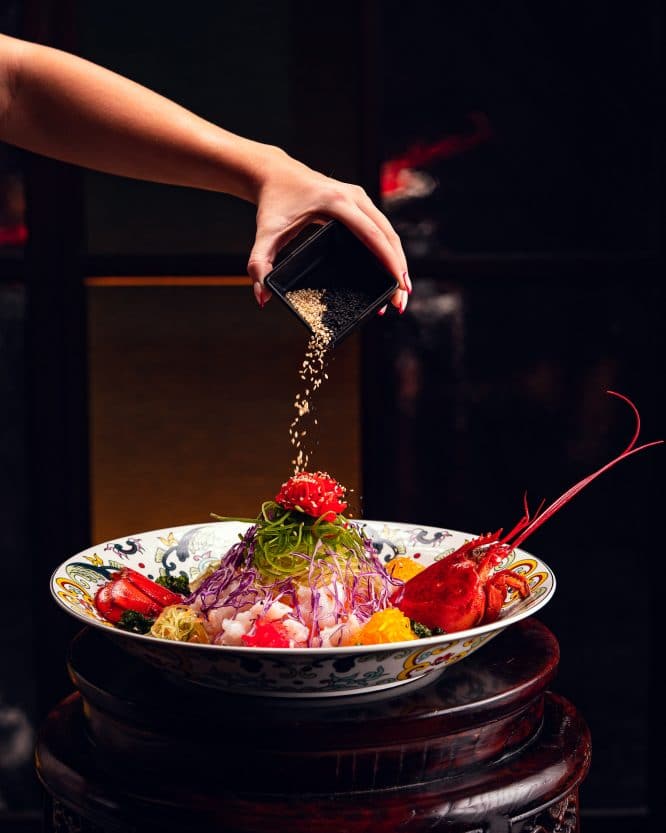 Perched on Level 33 of London’s most visible building, The Shard, Hutong is all about tasty Northern Chinese cooking and exquisite, cityscape views. What better way to ring in the Lunar New Year than here we say?! Sifu (that’s ‘master’ to me and you) Fei Wang has pulled out all the stops this year and has designed a delectable five-course ‘Year of the Tiger’ menu, which you can enjoy on actual Lunar New Year itself – Thursday February 1 – for a price of £125 per person.

Rustled-up dishes will include Hutong’s famous roast Peking duck with pancakes and Hoisin sauce, and ‘Lo Hei’ –  a prosperity-bringing salad traditionally eaten at Lunar New Year. Lion dancers and a Chinese calligrapher will also perform throughout the evening, and you’ll also be able to indulge in a special cocktail – a concoction of Don Julio Blanco tequila, Nigori sake, mandarin puree, lime juice, and pepper honey.

3. Try a cuppa or two of a new type of tea themed to the ‘Year of the Tiger’ 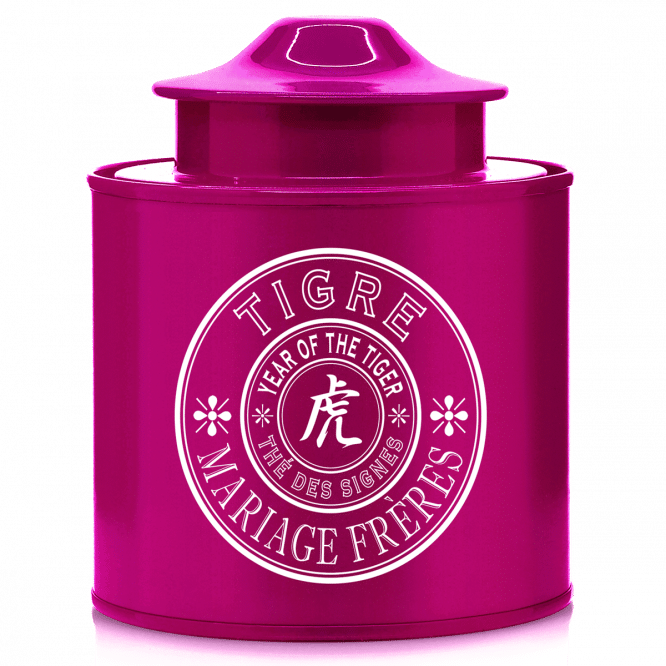 In celebration of the Lunar New Year, luxury tea brand Mariage Frères has added a new blend to its Thé Des Signes® Chinese zodiac tea collection – Tigre – to welcome in the ‘Year of the Tiger’.  Emulating the namesake sign, this new and exciting brand of tea is a bold composition of black tea sprinkled with golden tips, cedar, pine needle balm and an extra hint of sunny bergamot.

It’s presented inside a pink pagoda-themed tin to take you on a journey back to historic East Asia, and Tibetan goji berries – the signature ingredient of the Thé Des Signes® range – add plenty of healthy antioxidants. It all sounds pretty great to us, and who doesn’t love a cuppa or two? Mariage Frères is based in Covent Garden, or you can purchase your tea online for £26 per pagoda. We’re already itching to get our cold, weather-beaten hands on it! 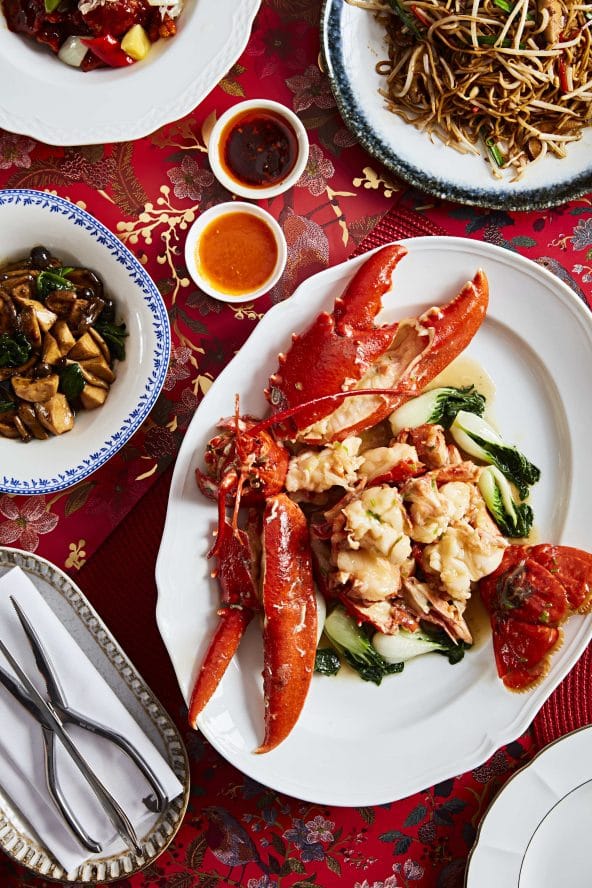 This will be Mayfair-based MiMi Mei Fair’s first Lunar New Year, and to celebrate they’ve installed a bespoke Chinese wishing tree installation on their ground floor, envisioned by founder and restaurateur Samyukta Nair and in collaboration with the luxury florist Lucy Vail. Traditionally known as ‘money trees’ and thought of as a symbol of prosperity and good luck, these trees are the place to go if you’re looking to make a wish come true for the year ahead.

Not only does this one promise to be pretty darn beautiful, but you can perch beneath its branches while you wine and dine on their special festive feasting menu, which runs from January 24 to February 15. Think a glass of champers, a wok-baked lobster – ‘the dragon of the sea’ – and a ‘basket of wealth’ with seared oysters and melt-in-your-mouth chicken and chive dim sum. Sign us up.

5. Tuck into some tasty food from India’s Chinese community at Fatt Pundit 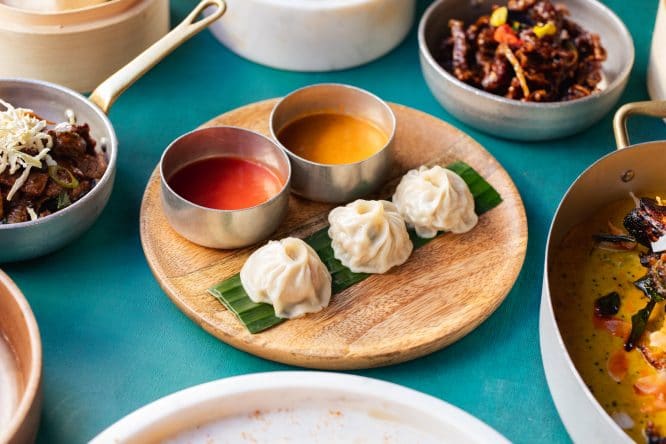 Indo-Chinese culture was created by those who emigrated from the provinces of Canton and Guangdong in China and settled in Kolkata and Mumbai, where they began incorporating Indian spices into their Chinese dishes. The result is an eclectic melting pot of cuisines, and Fatt Punditt in Covent Garden is one of the best spots in the capital in which to try it.

Here you’ll be able to gorge yourself silly on some lip-smackingly good momos or try some succulent Malabar monkfish curry, shredded chilli venison and honey chilli duck. They also offer up their signature ‘White Tiger’ cocktail – a delicious mix of lychees, elderflower and Hapusa gin, which is distilled on the dramatic slopes of the mighty Himalayas. What better way to ring in the Lunar New Year than slurping on one of these we say.

6. Bring back your childhood memories with takeaway classics at Boxpark Shoreditch 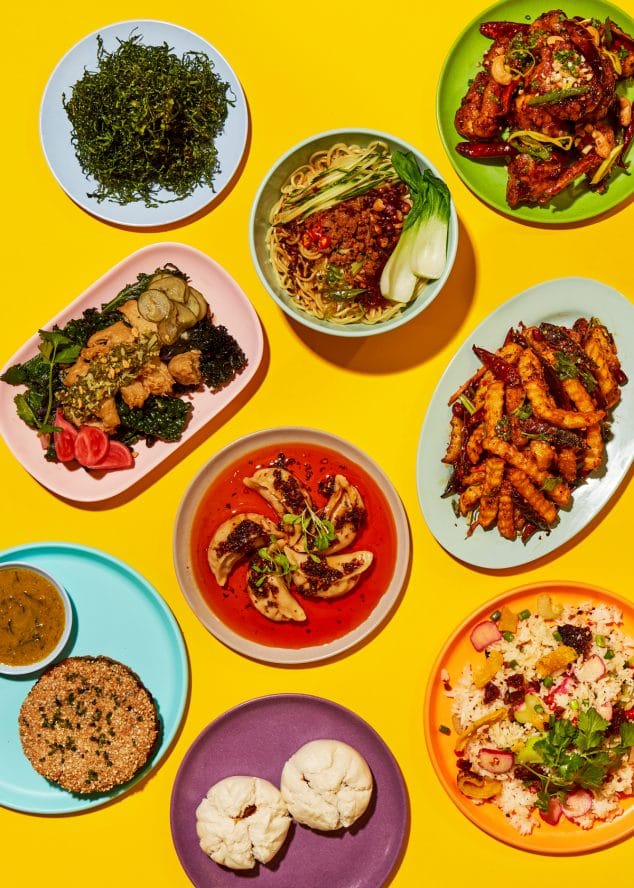 The vibe here is all about perfectly-choreographed chaos and vibrant, in-your-face flavours – and you’ll find neat twists on dishes we all know well such as prawn toast, kung pao chicken and char siu bao steamed buns. Plus, it’s all vegan (and bloody tasty if we say so ourselves), so there will be something for everyone here.

7. Sip your way through a ‘Year of the Tiger’ afternoon tea at Pan Pacific London 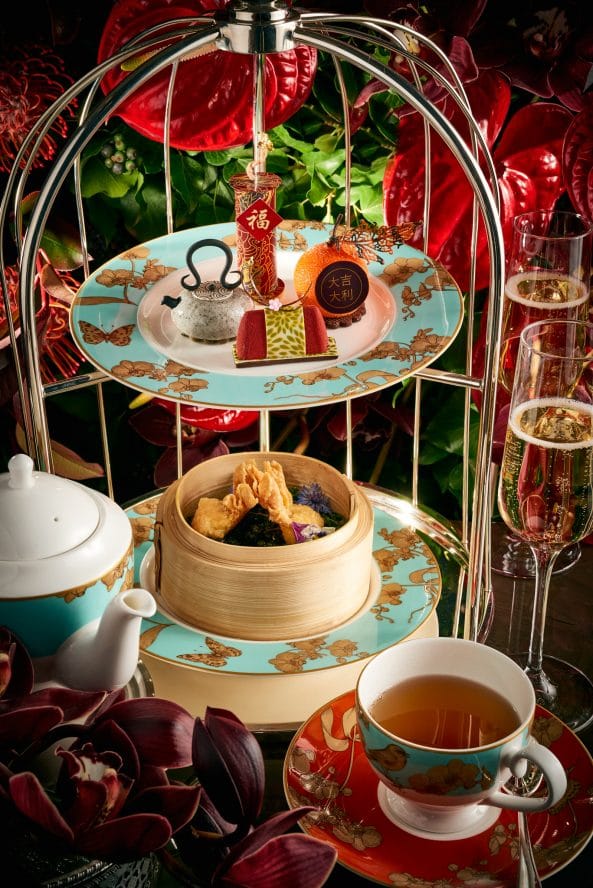 It’s all kicking off this Lunar New Year at Pan Pacific London, a gleaming five-star hotel just around the corner from the Duck and Waffle. From now until February 28, they’re offering the ‘Year of the Tiger Kopi Tiam Afternoon Tea’ – a firecracker of a celebration which includes red date and goji berry tea, a mandarin orange mousse, a marmalade and tiger sponge, and a Sesame Teapot, with black sesame, yuzu, and cheesecake.

Those looking for something a bit more savoury can get their teeth into crispy seafood bean curd rolls, crispy prawn dumplings and scallop siu mais. The whole Singapore-themed, afternoon tea experience has been coined by exec chef Lorraine Sinclair and pastry chef Cherish Finden, and it’s guaranteed to be pretty damn memorable. They’ve also got a Chinese set menu in their Straits Kitchen Bar and a wishing tree in the foyer to boot.

8. See if luck is on your side at BAO 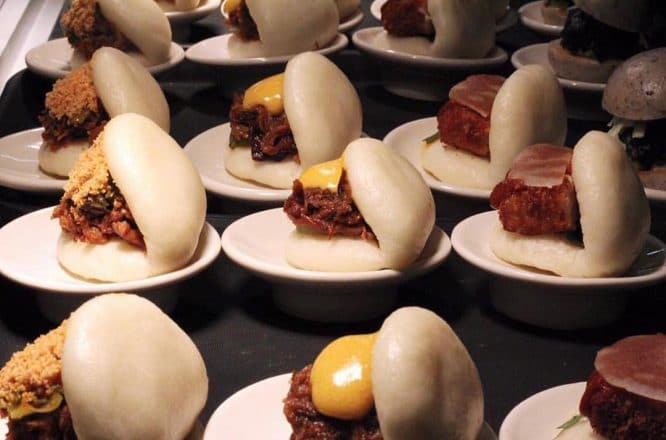 BAO, the legendary bunslingers who’ve built a fearsome reputation for casually brilliant dining, have pulled out all the stops for Lunar New Year this year. From January 28, they’ll be giving out traditional red envelopes filled with prizes to auspicious BAO lovers, with one especially lucky recipient winning a whole year of daily BAOs on the house with the ‘a BAO a day’ metal pass. Yep – you read that right.

What’s more, to usher in the ‘Year of the Tiger’ – the fiery, independent sign of the Chinese zodiac that will rule over 2022 – they’re also dishing up striped ‘tiger claw BBGs’, filled with molten chocolate. Yum, yum.

9. Get involved with themed menus at both Hakkasan and Yauatcha 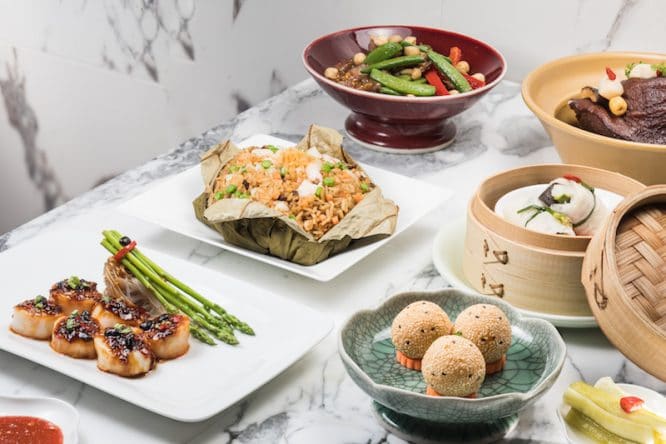 If you’re looking to go full hog this Lunar New Year, then look no further than these two beloved spots, which both feature on our list of the best Chinese restaurants in London. First up is the Michelin-starred Hakkasan, whose two branches in Hanway Place and Mayfair will be ushering in the ‘Year of the Tiger’ with a luxurious set menu and a special ‘King of Fuijan’ cocktail.

They’ve also put a real emphasis on sustainability this year, with pre-sourced vintage clothing for the staff and oil-painted tiger murals across the walls. Similarly, renowned dim sum tea houses Yauatcha City and Yauatcha Soho will be seeing in the new year with a limited-edition themed set menu, inspired by the strength and bravery of the year’s mascot, as well as a specially-created cocktail and spectacular visual displays across both branches.

10. Take a wander through London’s Chinatown and sample some delicious delicacies 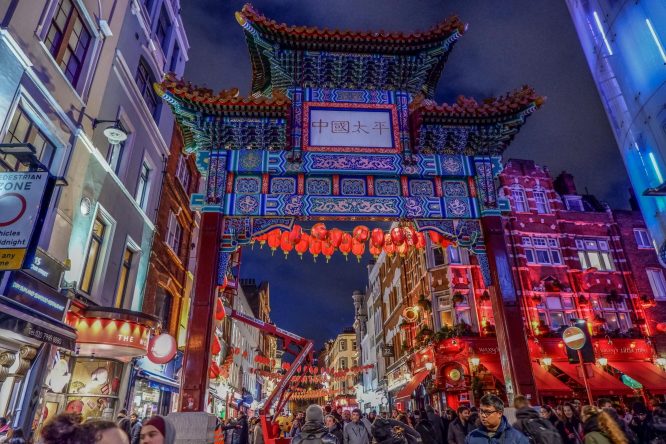 We thought what better way to round up this list of the best ways in which to celebrate Lunar New Year than taking a wander through Chinatown. Offering loads of yummy food options, all the saucy dumplings you could want and some Chinese supermarkets to inspire you to get cooking at home, it’s the perfect place to while away the hours.

While the celebrations have been scaled back this year, there’s still plenty here to keep you entertained. Try ‘lucky’ jiaozi dumplings at Dumplings Legend or Jen Café, order a Malaysian yu-sheng – otherwise known as a ‘prosperity salad’ – at Rasa Sayang or go all out and eat braised lobster with ginger and spring onions at Plum Valley.

You could also tuck into a steamed sea bass – a traditional Lunar New Year dish – at Lotus Garden or pick up some tang yuans (or ‘soup balls’) at the See Woo Supermarket.

21 Things All Londoners Will Hear Themselves Say In January