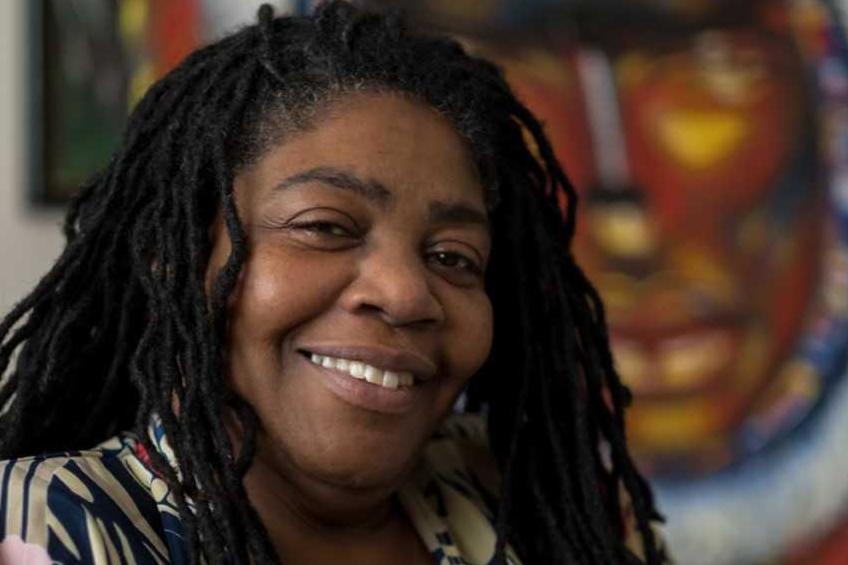 south London mother suffering from terminal cancer hopes her debut art exhibition can give people hope during the coronavirus pandemic.

Audrey Williams, 61, from Streatham, has spent the past two decades battling different forms of the disease and undergoing countless operations, yet her life is not defined by pain and hardship but by bright, vibrant colours.

In 2006, three years after receiving her first shattering diagnosis she decided to take up painting.

In a year which has brought suffering to so many, Audrey hopes her work will remind people that resilience can take many different forms, shades and textures but it is present in us all.

“I don’t know how long I have left, so I want to spend every moment sharing some element of joy and strength to others – showing that there are ways for us all to get through even the darkest days,” she told the Standard.

The 61-year-old previously worked in John Lewis while raising her two children, now aged 30 and 40, and caring for her elderly mother.

When her illness forced her to take early retirement Audrey refused to “stay at home watching TV”.

“I had always wanted to paint but just couldn’t find the time before,” she explained. “Once I started, I realised it was what I was meant to be doing all along.”

Since then she has created hundreds of works using a range of media – from acrylic paints to beads, seeds and feathers.

“Painting isn’t rocket science,” she insisted. “But so many people have told me ‘oh no, I can’t do that’. One friend told me they couldn’t even draw a matchstick.

“But it’s mind over matter; art is about expressing yourself, so anyone can do it. People just need to find the confidence to start something new.

“And it doesn’t have to be painting. The important thing is that everyone should have a hobby, something to release the stress.”

“For me, art filled a gap,” she said. “It was a relief from everything – the pain, the anger – it brought me so much healing.

The common thread is not the image they depict but the power, pride and strength harnessed within each piece.

“There’s an element of me in every single picture,” Audrey said. “They are all such strong characters who leave their magic with anyone who sees them.”

After being diagnosed with terminal bowel cancer last year, Audrey set about sharing her work to as wide an audience as possible.

She got in touch with artist and curator Andrew Mashigo, who sifted through her trove of more than 400 works to create an exhibition of 53 paintings and 84 prints.

He named the exhibition “And We Become”, and it will run at the Zenubian Gallery in Hither Green this weekend.

How the government must help freelancers, according to the arts world

Asked why he chose the title, Andrew said: “I wanted a name that’s not finite, it’s infinite, it’s for everybody – everybody can become what they want to become.”

“Even with Audrey’s journey, her pain, her trials, she has still become this person, this spark, that she is right now; and everybody can go through that.”

Andrew explained that now, more than ever, people need messages of hope and this is what he and Audrey hoped to deliver.

“We want to use this as a platform to encourage, especially the young people who are marginalised, disenfranchised, saying there is no hope for the future, and particularly during this year which most people have written off,” he said.

“Because I say, you know what, we’re not going to feed off the fact Audrey has cancer, instead we’re going to show that even though she went through so much pain she still can create life, colour, vibrance.”

“And even if her work doesn’t touch everyone – even if it’s just one person in a thousand – someone out there will still have their life changed by seeing Audrey’s works and by hearing her story.”

Andrew explained that he divided Audrey’s work into “four seasons” for this weekend’s exhibition, which will be held according to strict Covid-secure guidelines.

The seasons illustrate the breadth of her work, so instead of summer, winter, autumn, spring, he has labelled them: the warrior series – “because she’s a warrior in her heart and a warrior when she speaks”; portraits; black history past and present – “which tells stories of the challenges black people have had to face through her paintings”; and animals.

For Andrew there are two things that stand out in every piece Audrey has created: the colours and the eyes.

Once the exhibition has finished he plans to create a month-long virtual display, which will be accessible via his website, Artists Showcase International.

From there, he hopes to do a series of touring exhibitions across London, with Audrey if her health permits.

The 61-year-old said she is “looking for a miracle” but, whatever happens, she is so proud of everything she has achieved with her art.

“Sometimes I can’t believe I’ve done as much work as I have. It blows my mind, actually,” she said.

“It’s taken time, it’s taken money, it’s taken a lot of love and definitely a lot of passion as well, but every piece I’ve done has been more than enjoyable, it’s been a great achievement.”

Asked which painting best represents her, Audrey didn’t hesitate with her response: “It is my African queen, Queen Idia. She is a warrior, like me.

“Because that’s how I want to be remembered: as a warrior queen.”

You can book tickets to And We Become by reserving a time slot here.