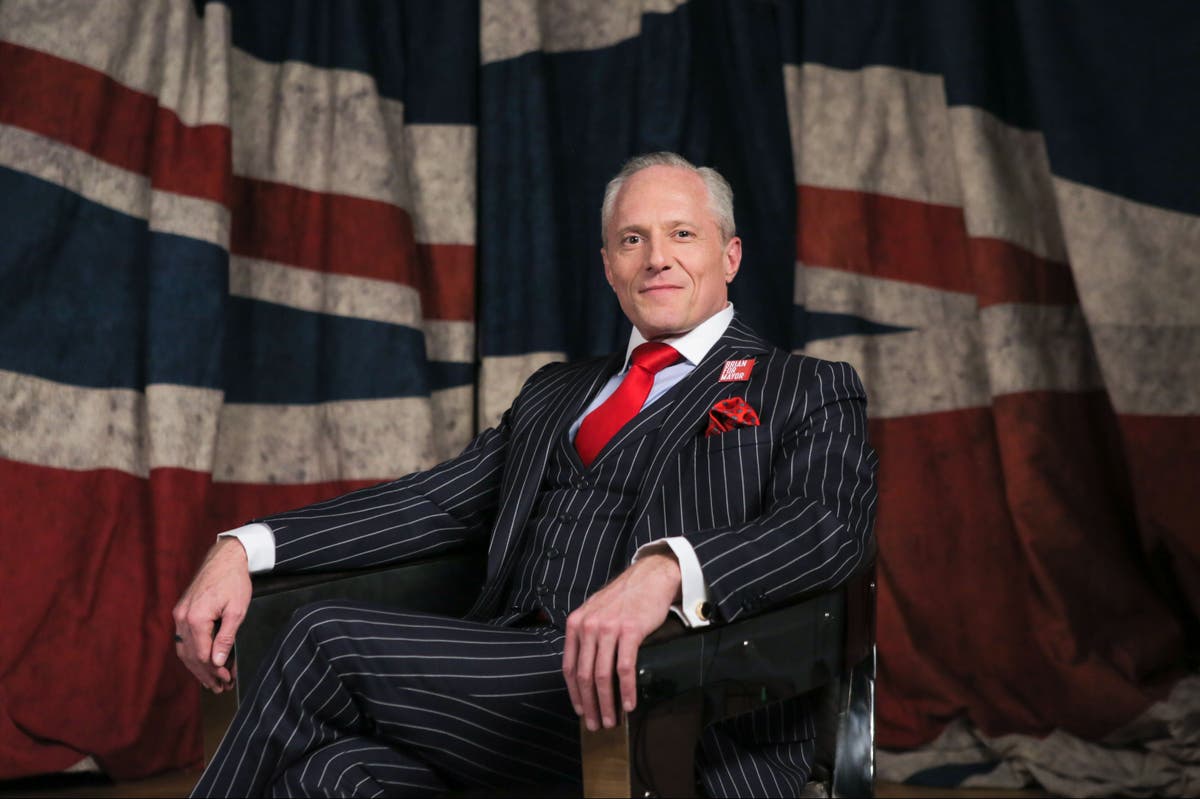 rian Rose is already referring to himself as the Mayor and says that Londoners are too. “A kid rode past me on a bike and said, ‘you’re the Mayor, innit’,” he tells me, attempting a cockney accent. Rose is from San Diego, made a fortune as a banker on Wall Street and despite having not voted in the last mayoral or general elections, he is throwing everything at a bid to succeed Sadiq Khan. He’s certainly in with a chance to win the biggest character in the race. What Rose lacks in political experience, he makes up for in enthusiasm and exposure. You may have seen him on billboards around the capital or in his YouTube videos, announcing his manifesto, or “transform London 2021 plan of attack” as he calls it. Think accidental Alan Partridge, the American version. Despite polls putting Khan way out in front, Rose, who lives in Camden, thinks he is in with a chance: “I don’t believe in polls, they are out of date. We are going to see one of the greatest upsets in political history.” Later he admits he did his own poll and got 98 per cent.

He’s spent a seven-figure sum on his campaign (“I don’t do things by half measures”) and says that it is self-funded; by his former life as a banker in the US and at the company formerly known as ICAP PLC over here, as well as through his YouTube channel and associated academy London Real, which he set up after leaving the City in 2011. As well as offering training in business and public speaking, London Real airs long form interviews with everyone from Taoist sexual healing teachers to “Edward Snowden’s attorney, before Snowden was cool”. Rose “wants guests who make me uncomfortable”. It aims, grandly, for the “mass scale transformation of humanity into a fully empowered conscious and co-operative species”. He tells me that he has a YouTube Gold button framed on his office wall, which he got for reaching a million subscribers. Last year, he interviewed conspiracy theory David Icke on the platform, the man who believes that the world is run by reptiles. The video was taken down by YouTube. Rose has no regrets about having him on, believing people can make up their own mind and launched a crowdfunder for a Digital Freedom Platform to host another interview with Icke .

The financing of Rose’s Mayoral bid has been questioned – the Digital Freedom crowdfunder raised more than a million US dollars but the platform is yet to be set up.  That has led to speculation donations have been diverted into his campaign fund. A spokesperson for the Brian For Mayor campaign says: “We firmly refute the allegations that any money raised to support our Digital Freedom Platform initiative has been used for financing the mayoral campaign. The majority of our campaign spend has been self-funded. We believe in our policies, we believe in our ideas and we back ourselves to win on May 6th.” Rose added he was taking legal action against a publisher of the allegation.

We have met outside the London Real HQ off Old Street. Wearing one of his trademark three-piece pinstripe suits, Rose, aged 50, speaks openly about his heroin addiction and nearly being cancelled for interviewing Icke (Rose believes people can make up their own mind). The only question he tells me that is too “sensitive” is how many suits he has. After cajoling he says it is 10.

So why is he doing this? “Last year I started thinking, 20 years from now my young boys, aged three and four, are going to say, ‘Daddy, what did you do in the great crisis of 2021? Did you make videos or do something?’ I told my wife, ‘Honey, I’m going to run for Mayor. She said ‘Why? Your business has never been bigger.’ I had to do it for London.”

While he doesn’t agree with Icke that Covid is a “scam”, Rose has the controversial view that “it is the job of the Mayor to have found alternatives to lockdown that could have kept the city functioning — the Mayor of Manchester, for example, fought for hospitality. It was not responsible for that many transmissions.” When he talks about gyms closing he appears devastated. He “encourages everyone to get the vaccine” but has no plans to get it himself, “I am low-risk”. On the campaign trail he shakes hands and is against vaccine passports as they restrict freedom.

His policies are ambitious —building 50,000 new homes by Christmas (he has a site in Hackney), getting London going again with congestion charge and business rates holidays and digitising the police. The Tube is “fantastic but we could run it at a profit and make it look like Heathrow Terminal 5.” How would he afford that? “Better management and an infrastructure levy.”

“Londoners care about four things; jobs and the economy, transport, crime and housing,” he continues. “I didn’t know this when I started. Someone stopped me in the borough of Deptford and said, you are the Elon Musk of politics. Everyone said he couldn’t do electric cars, now they’re all doing them.” He pronounces it “burrow of dep-t-ford” and says “ciddy” a lot.

With his red tie, broadcasting background and drive to disrupt traditional politics, Rose reminds me of another American — Donald Trump. Rose used to vote Democrat then Republican; what does he make of the former president? “I will say one thing about his Twitter, it showed transparency. You got a view of what the leader was thinking. YouTube is better than Twitter. He showed you don’t have to be in the traditional system to be a leader.”

Rose grew up in San Diego. His father was an engineer, his mother a teacher. His grandparents on both sides had farms and Rose says this “taught me the value of work — my dad told me that he never quit because ‘on the farm, you can’t quit or you die; don’t complain, get the job done’.” His parents divorced when he was seven, “which freaked me out and taught me I had to be self-sufficient..” The closest he came to an interest in politics was writing a letter to Ronald Reagan as a child. “My mum said I could do anything so I wrote to Reagan asking to meet. He replied with a photo of him on a horse.”

After university, he was “seduced” by Wall Street. “It was all alpha intimidation,” he says. “ I was thrown phones and risked millions of dollars. They let me do it at 22.” That was when he started taking heroin. “It wasn’t necessarily the banking lifestyle that did it but New York and Brian Rose. In New York you are constantly shown how someone is better than you. I thought money would buy happiness but when I started making money I wasn’t smart enough to figure out that my job wasn’t making me happy. I am hard on myself and have high standards. In a place like New York, all sorts of drugs are there. Heroin became my drug of choice. I snorted it because I wasn’t a drug addict. To the outside world I seemed functional.”

One night, he stopped breathing and had to be resuscitated. “Within days I was using again.” It was only when his girlfriend left him and he was fired from his job that he decided to “get my act together”. The next month, January 2002, he moved to London, having lived here in the Nineties. He’s been clean ever since: “I’d gone so low I shocked myself out of it. This city rehabilitated me.” In London he started boxing, breakdancing and mindfulness. He met is wife, Mariana, who is from Bulgaria, 12 years ago at Dolce & Gabbana Old Bond Street when she was working there. She didn’t know about his drug addiction until 2018. He was in New York making a film for London Real about doing the Iron Man challenge when he broke down and realised he wanted to tell the world about it. “I made a documentary about it and my crew were not sure about saying heroin because it has connotations but the response was incredible.” Telling his adopted daughter, who is Marianna’s from a previous relationship, “was the hardest part”. It is his daughter, 17, who inspired the Sudoku puzzles on the leaflets he has given out, she likes it. Now he is a Londoner, he has his British Citzenship certificate framed on the wall: “I’ve lived here longer than any other city in the world and I plan on being buried here,” he says. “I like going to cemeteries, I am fascinated by them and they remind you to live.”

If Rose wins the election, he plans to keep London Real going. “The Mayor should be live streaming daily. I am speaking to young people on a platform they understand so turnout will be high. Also, since Covid, leaders have made decisions that weren’t in people’s interests that cost them their jobs or their mental health. So people are more engaged than ever.” What if he doesn’t win? Rose has a politician’s answer: “I’m focused on winning. In a few months, I hope to have the hardest job I’ve had in my life.”

How much is a pint of milk?

And a pint of beer?

I’ve stopped drinking but I would say £2.

Are you a feminist?

I wouldn’t say so. That would mean I have a certain set of values. I am not any “-ist” apart from an optimist and a humanist. I am open to all points of view.

No. That being said, I catch myself thinking how can I learn from ideas I don’t agree with and if someone is woke what does that mean, why are they feeling that way, can we find a solution?

I used to like a steakhouse in Hackney that got meat from Ginger Pig. I was a vegan for Iron Man but I am no longer one. Back in the day I liked Gaucho, when it was the only steakhouse in London.

What makes a Londoner?

An indomitable spirit and a belief that hard work can take you anywhere. So many of us were born in other countries or have parents who were, people ask me “what’s with that accent?” but we have all come here and contributed.

Do you have a London secret?

I am obsessed with graveyards.