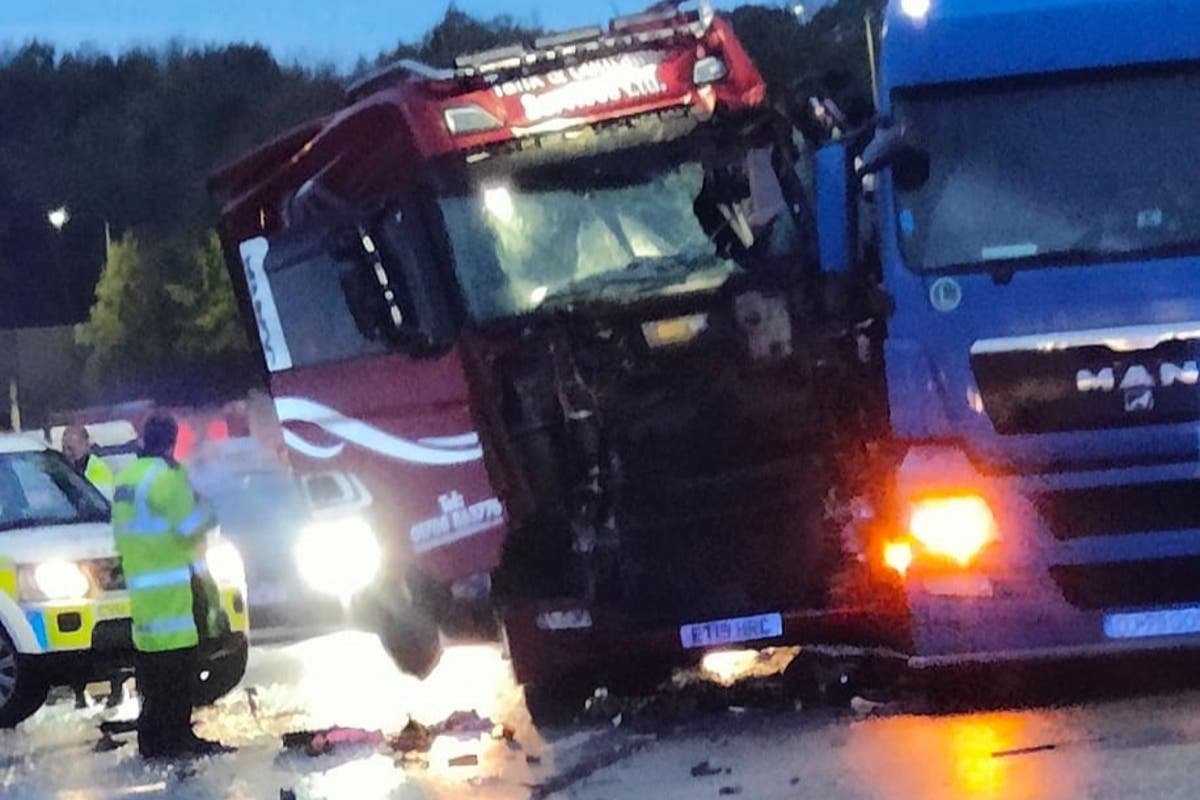 police officer riding a motorbike has been injured in a crash involving two lorries on the M25 as Just Stop Oil protesters climbed gantries above the road for a third day.

Essex Police said an officer was struck after dealing with a protester on the motorway between Junction 26 and 27 on Wednesday morning.

A rolling road block was put in place and as a result there was a crash between two lorries and a police motorbike. Two protesters have been arrested.

“Our roads policing officers are dedicated, specialist officers who come to work to serve the public and keep you safe on our roads,” said Chief Superintendent Simon Anslow.

“They do this tirelessly, day-in day-out. Sadly, this morning one of these fantastic officers has been injured while carrying out this work.

“My thoughts are with them and their family.”

A witness told MailOnline that a woman started climbing a concrete pole and a police officer on a motorbike tried to stop her then collided into a lorry, which crashed with another lorrry.

“They arrested the woman before she could get on to the gantry,” the witness said.

Multiple junctions were closed for hours while protesters were removed from gantries, and there was disruption at the Dartford Crossing.

Metropolitan Police suspected a person – who has been arrested – had locked themselves onto a gantry between Junction 24 and 25.

“Locks add more complexity for our removal teams and the overall process becomes longer. We have had to bring in specialist equipment for this removal, including a JCB.”

A number of protesters have been arrested for public nuisance.

Just Stop Oil said around 10 supporters climbed onto gantries forcing police to halt traffic at 6.30am.

It’s part of the group’s campaign calling on the Government to stop all new oil and gas licences and consents.

Isabel Rock, 41, an artist from South London said: “The government is responsible for criminal inaction on the climate crisis. They should be in prison, not me. It is my moral duty to cause disruption to force the government to act.”

Sam Holland, 20, said: “I’m getting screwed over. I’m twenty years old. What does my future look like when I’m forty? It looks like there’s no food on the shelves. It looks like people fighting in the streets.”

On Tuesday 16 protesters were arrestrd after climbing gantries on the M25 and disrupted traffic at nine locations. Members of the media also reported being arrested and held in police custody in Hertfordshire.

Since the start of October the Met has used more than 11,000 officer shifts to police Just Stop Oil protests.

“These are officers who would otherwise be dealing with issues that matter to local communities such as knife crime, safeguarding and responding to burglaries,” said Assistant Commissioner Matt Twist.

“We are determined to bring to justice all those who conspire to cause significant and unreasonable disruption to London and the motorway network and we’ll work closely with the Crown Prosecution Service and the courts to make sure this happens.”

Twenty-two people have already been charged as part the M25 protests.