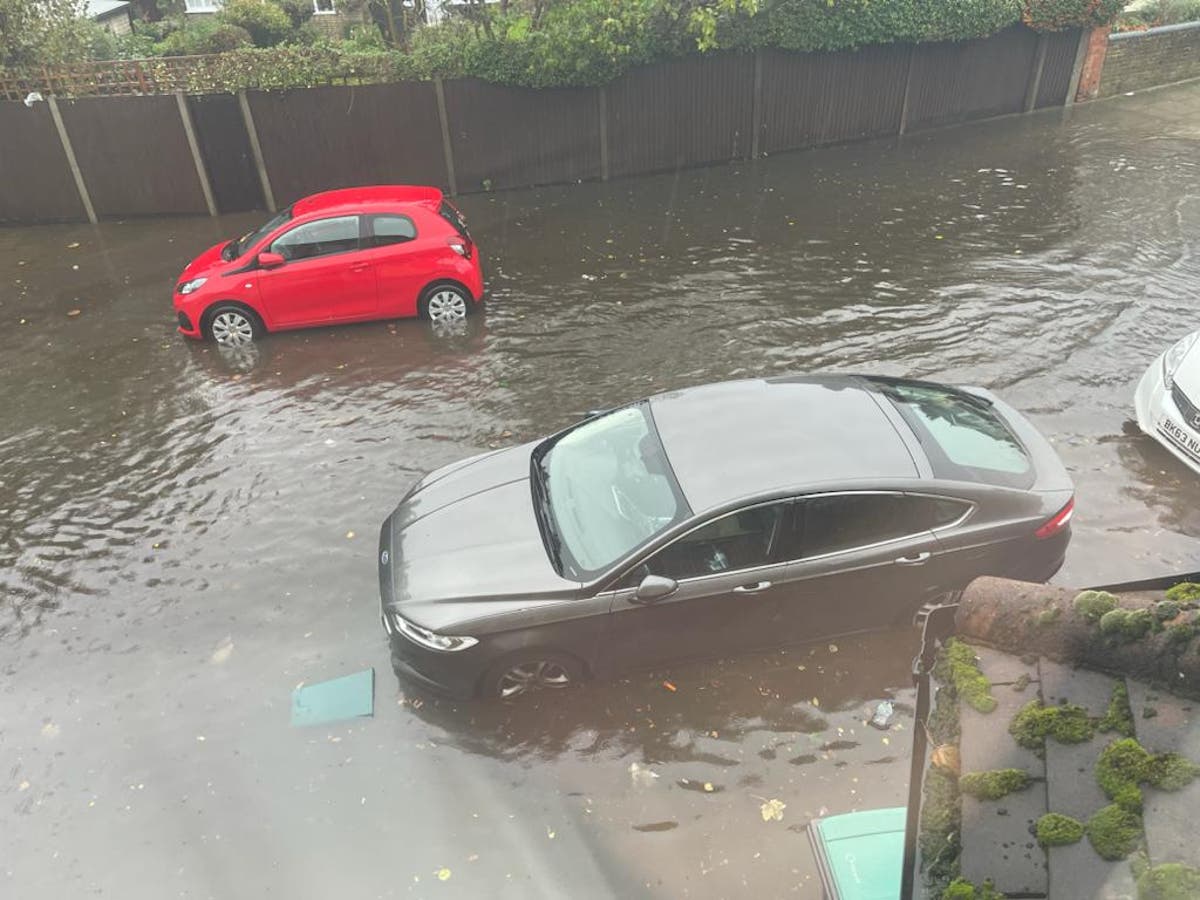 ondon has been hit with flooding after heavy rain overnight and on Sunday morning.

Around the capital, photos and videos have been shared online of drivers and pedestrians struggling against deep water caused by the downpours.

The Met Office shared a link to a government website, which gave a statement reading: “Local inland flooding is probable in parts of south-east England on Sunday and is possible in London and the east of England.

“Further local inland flooding is possible in parts of south-west England late on Monday and early on Tuesday.”

There were difficulties on transport networks, with Dagenham Heathway station temporarily closing due to flooding.

Floods were seen in parts of London such as Brent, Haringey and Lewisham.

Adam Hartley shared a picture on Twitter of his view to his road in Haringey, where water was shin deep and causing problems for local traffic.

He told the Standard: “The problem is that I live at the bottom of two steep hills in Muswell Hill. So every time it rains the leaves and dirt flush down the hill and block the drains on our road.

“I’m lucky, in that I’m (reasonably) young, healthy and capable enough to put on some wellies and wade through the remnants of the flood today.”

He added that Haringey Council was contacted about drain blockage issues but no connection was possible outside office hours. However, Mr Hartley contacted former mayor councillor Adam Jogee – who sent out an emergency team.

Mr Jogee tweeted: “There’s a wider conversation that needs to be had with government and env agency about impact of climate change on our Victorian sewage and drainage infrastructure and giving councils resources to support residents.”

The Mayor of Hackney Philip Glanville posted on Twitter that the local authority had targeted areas such as the A10 to reduce the impact of flooding from the heavy rains seen overnight.

Residents complained of flooding in the Mall in Brent and called for long-term measures to prevent it continuing to happen.

Flooding was also reported on Kew Green and in other parts of Richmond.

A yellow weather warning of heavy rain causing potential flooding to homes is in place for large parts of south-east England, with rain predicted for much of the coming week.

The Met Office has warned that persistent, heavy rain could lead to flooding of homes and businesses and affect public transport in an area stretching from Chichester, West Sussex, to Canterbury, Kent.

Forecasters said rain was set to become heavier during Sunday in south-eastern parts of England during the morning before becoming clearer in the afternoon.

A Met Office spokesman said: “Southern England and the South East has seen quite a heavy band of rain move fairly slowly.

In the north-east Midlands and north-east England, fog was expected to slowly clear with sunny spells and showers, with some risk of thunder mainly in the west, through the rest of the day.

The Met Office said Monday is forecast to be cloudy with spells of rain mainly in the west, where it will become “very windy” later while remaining brighter in the east.

Heavy, squally rain is predicted to return overnight into Tuesday, making way for sunny spells and showers which ease on Wednesday, with more rain expected in north-western areas on Thursday when it is expected to be windy but mild.