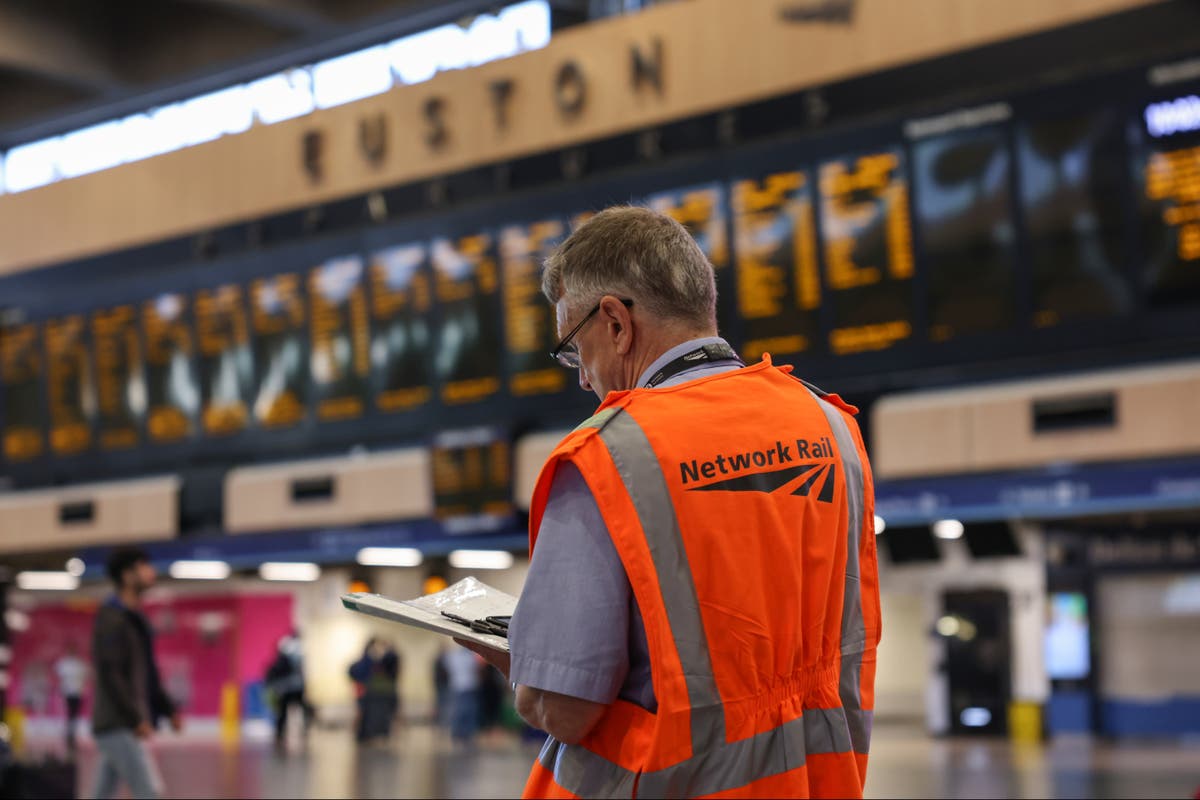 nion chief Mick Lynch called on Grant Shapps to “get on with the job” and “settle the dispute” on Saturday.

As rail workers picketed for the third time this week the head of the Rail, Maritime and Transport Workers (RMT), accused the Government of not approaching talks with a constructive attitude.

He said: “He needs to tone down the rhetoric and get on with his job, which is to settle this dispute. I think their attitude is not constructive and I think it’s preventing us from getting a settlement.”

Unless talks come to a resolution, Mr Lynch wanred more strikes will be planned later this year.

Approximately a fifth of rail services are operating while up to half the lines across the country are closed, with many only running between between 7.30am and 6.30pm.

In London, the overground is running a reduced service and is part closed. The District and Bakerloo lines are also part suspended, while the central, cirlcle, victoria, and metropolitan lines are experiencing minor to severe delays.

All other lines on the Tube network are mostlty unaffected, although Transport for London is running a reduced service on the Elizabeth Line and has advised travellers to expect disruption.

The Business Secretary is set to shoot down the prospect of unions holding electronic strike ballots, citing concerns the votes could be vulnerable to a “malevolent attack” from foreign states.

An independent review of electronic balloting back in 2017, led by former chief fire and rescue adviser Sir Ken Knight, concluded the method should be “examined in test conditions before it is introduced under any live situation or fully rolled out”, and only for non-statutory votes.

The Government said at the time it would consider the recommendations and consult with experts from relevant organisations before responding.

Three years on, in 2020, the Trades Union Congress (TUC) mocked ministers for the lengthy wait for their verdict, saying their response “must be lost in the post”.

The TUC argued in favour of e-ballots, making the case the law as it stands “remains stuck firmly in the pre-digital era”.

Actor Rob Delaney was pictured joining the RMT strike action outside Kings Cross holding up a t-shirt of Mick Lynch.

Delaney told the crowds the strike was “inspiring” and called RMT’s action the “tip of the spear”.

“I offer my unwavering support and solidarity,” he said.

Speaking to PA after his speech, the actor said: “I ride trains like you ride trains and I would like the people who clean them to be fairly paid, or not have a pay cut in real terms or have their job removed.”

He added that he hopes the dispute gets resolved because those striking should not be out protesting in King’s Cross on a Saturday in June but should be outside or “on the beach”.

Speaking at a picket line outside Euston Station in central London on Saturday morning, he said: “We’re not ruling out strikes but we have not put down any dates for any strike action.

“We’re going to review with our national executive next week, who have been all the way round the country this week on the picket line, so we’re all going to get together the leadership of the union and see where we are.

“We are not going to name dates immediately

“If we had people who were used to doing work we might get a better deal out of them.”

Concertgoers hoping to travel by car to Wembley Stadium for Ed Sheeran’s Mathematics Tour on Saturday faced paying up to £231 for a rented parking space for the evening, as the rail strike forced fans to drive to the event.

Karen and Amanda Pollecutt, sisters from Goring-by-Sea, West Sussex, were originally hoping to catch a Southern train to central London for the gig.

Upon realising the strike would affect their journey, they planned to drive straight to the Wembley stadium, but found all five of the nearby car parks were fully booked up, as were all the surrounding hotels.

Karen said: “We were looking at car parking, they were fully booked. We tried five around here. And then there was a website where you could park on someone’s drive and they wanted £231. And it was like, we like Ed Sheeran, but not that much!”

Union leaders today declared “enough is enough” as they promised to protect workers hit by the cost of living crisis in demonstrations outside Kings Cross station.

Eddie Dempsey, of the RMT Union, said they were fighting for the result all workers need.

He said: “There isn’t a train that moves in this country, not a bin gets emptied or a shelf that gets stacked without the kind, generous permission of the working class.”

Former shadow chancellor John McDonnell said he stands in “solidarity” with the RMT and railway workers.

Speaking to the PA news agency at the rally outside Kings Cross on Saturday, Mr McDonnell said: “I’m on picket line after picket line and so are many Labour MPs.

“I’m saying to Keir Starmer and other Labour MPs as well, do the right thing. If you think RMT have got a justifiable dispute, we should support them.

“I think it is justifiable,” he added. “Follow your conscience so therefore, for me, that means Labour MPs being on picket lines and it includes Keir Starmer as well coming off the fence, supporting working people because they’re not asking for the world. They’re asking for protection.”

Fans attending Ed Sheeran’s Mathemetics tour at Wembley Stadium on Saturday began their journeys to London as early as 2am on Friday morning due to the strikes.

Carol and Norman Wheeldon, 59, left home in Powys, Wales at 2am on Friday morning to ensure they made it to the concert.

The couple had booked a train to London on Friday but it was cancelled just over a week ago due to the strike, so they decided to travel almost 200 miles by car.

“We booked with Trainline and then a week ago we found out they weren’t running, so they gave us a full refund and we’ve had to travel down by car,” Mrs Wheeldon said.

She added: “Actually it was very, very easy. Our children put in the codes for us on the car Satnav and it was brilliant. Took us exactly to the car park.”

The couple stayed in a central London hotel overnight before completing their journey by Tube.