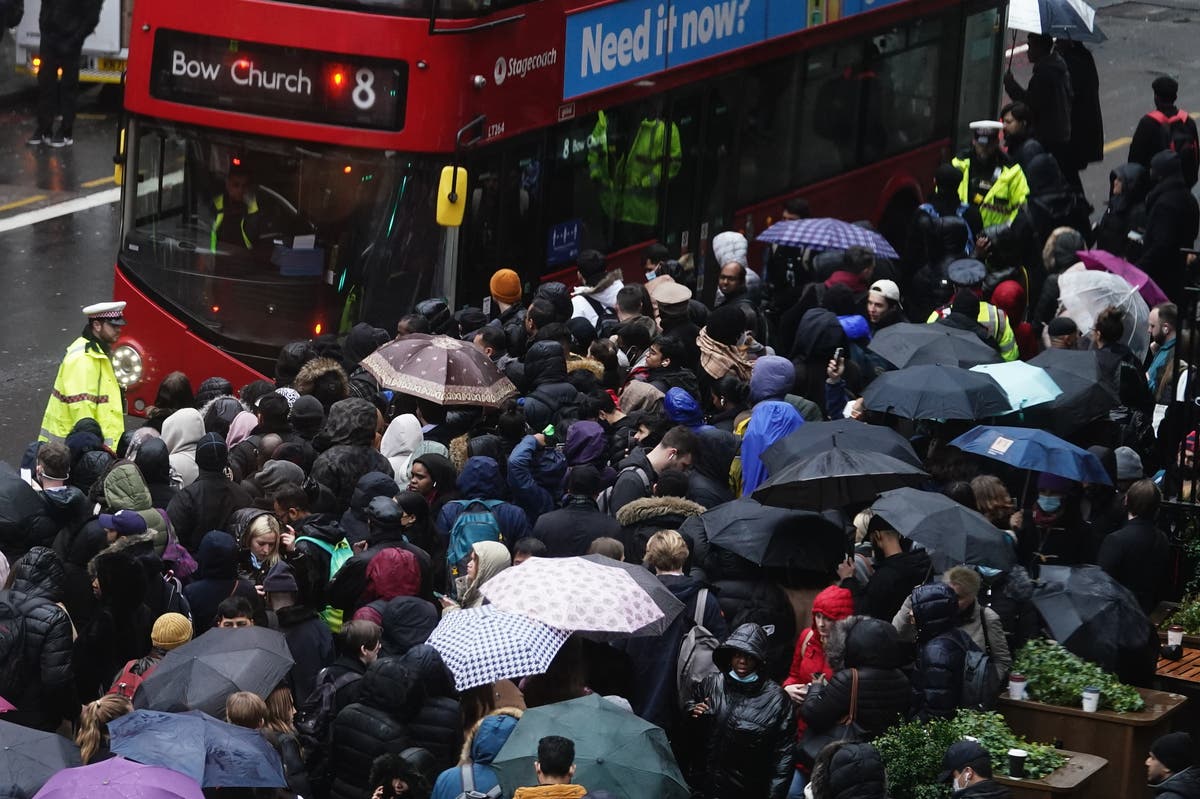 Members of the Rail, Maritime and Transport union are crippling the network with industrial action in a bitter dispute over jobs, pensions and conditions.

Furious central London business leaders condemned the walkout as a £100 million “kick in the teeth” that was a major setback to their efforts to recover from the pandemic.

Despite the hope of some services resuming by 7.30am, many found Tube stations locked and faced another miserable journey to work.

By 5pm on Wednesday, five out of 11 London Underground lines continued to run a reduced service.

Transport for London said customers should avoid travelling in the early morning on Thursday and try to make their journeys later in the day.

RMT general secretary Mick Lynch accused mayor Sadiq Khan of playing to the gallery after he told strikers to “wake up and smell the coffee” because industrial action would not make securing a deal with the government any easier.

As he confirmed the strike was o, Mr Lynch said: “If Sadiq Khan spent as much time putting pressure on ministers for a long-term TfL funding deal, instead of accepting their cuts agenda and attacking our members, there would be no need for a strike.”

Andy Lord, TfL’s chief operating officer, said: “I apologise to customers for this and understand they will be frustrated by this strike action, but urge them not to take it out on those who are trying to help.”

TfL said: “We are urging customers whose journeys rely on the Tube to work from home if they can, consider alternative modes of transport and leave extra time for essential journeys.

“While customers should prepare for no service throughout the day on Thursday, if any service is provided it will not continue into the evening and all journeys will need to be completed by 6.30pm.”

A spokesman added: “The planned action is also likely to severely impact services on Friday, with no service until at least 8am and a severely disrupted service after this.

“Customers are advised to avoid travelling in the early morning on Friday, check before they travel and aim to make journeys from mid-morning.”

Simon French, chief economist at brokers Panmure Gordon, estimated the impact on London’s economy to be about £50 million for each full day’s closure of the network.

It comes when restaurants, hotels, nightclubs and shops are desperate to make up the £80 billion of trade lost during the two years of Covid lockdowns and other restrictions.

Restaurateur David Moore, owner of Michelin-starred Fitzrovia’s Pied A Terre, said bookings were down 80 per cent on Tuesday.

He said: “We’re all supposed to be pulling together after two years but it’s all ‘me, me, me’ with the union.

“It’s even worse that the union’s chosen two of the days that most people are working now. If it had been Monday and Friday it would have been far less impact but clearly they wanted to hurt everybody.”

As heard on Spotify, as seen on Netflix, and having already toured more than 65 countries telling the best and worst dating stories, Story Party returns to London with five shows—. Comedians Rachman Blake and Gilli Apter are bringing to the stage several volumes of dating stories, with new true tales every night, to prove […]
The post The First Of Five Story Party Shows Hits The Stage This Sunday With Only The Best And Worst Dating Stories appeared first on Secret London. Secret London …