Amid the fireworks, several light projections filled the sky over the O2 Arena for the televised display, one of which showed the NHS logo in a heart while a child’s voice said “Thank you NHS heroes”.

An image was also projected of the familiar figure of one of the heroes of 2020, Captain Sir Tom Moore, who raised £33 million by walking in his back garden. There was also a humorous nod to one of the peculiarities of the past year – working from home – with a mute symbol backed by a voiceover saying “You’re on mute”.

As coloured lights shone at various points up the Thames, leading to more fireworks above Wembley Stadium, the Black Lives Matter movement was also recognised, before a closing call via the voice of Sir David Attenborough for all people to work in 2021 to help our “fragile” planet. 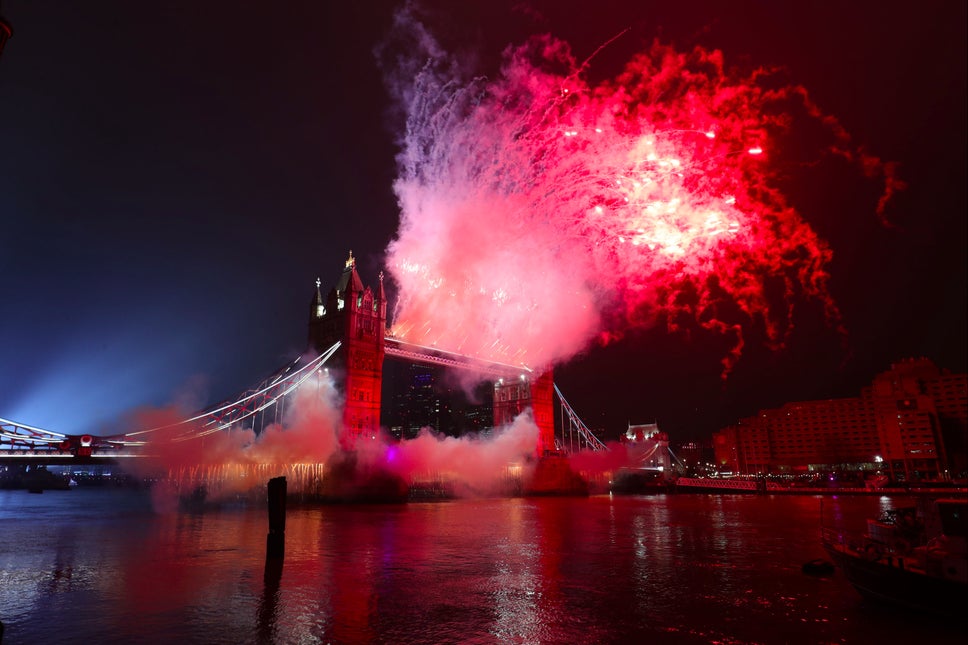 Despite the incredible display, much of London was eerily quiet as the capital welcomed in the New Year while under strict Tier 4 coronavirus measures.

Pictures from Leicester Square, Piccadilly Circus and the Embankment opposite the London Eye — places usually swamped with revellers on New Year’s Eve — showed them near-deserted on Thursday night. However, some people took to the streets despite warnings from police.

Officers were seen on patrol in Westminster moving on small groups of people who had gathered to celebrate. It comes after Scotland Yard told Londoners to celebrate New Year at home with revellers breaking the rules facing fines of up to £10,000.

The force’s message was issued amid rising infection rates and increased pressure on the capital’s hospitals.

Health service leaders have warned potential partygoers to stay at home to lower the risk of infection, warning: “Covid loves a crowd”.

People across the country were told not to add “fuel to the fire” by mixing in groups, as almost half of all major hospital trusts in England deal with more Covid-19 patients than at the peak of the first wave of the virus.

Figures published on New Year’s Eve – as health staff and the Government urge people to ring in 2021 within their own household – also show just under a third of acute trusts have more Covid-19 patients than at any point since the pandemic began.

Rates of infection are rising in all regions of the country, according to the latest data from Public Health England, and the 55,892 daily lab-confirmed cases in the UK on Thursday represent the latest record high since mass testing began in late May.

The 10-minute display in London also featured a humorous nod to one of the “new normals” of 2020 – working from home. The sounds of a video conference call starting up were heard, before the now-familiar and somewhat desperate words rang out – “No, you’re on mute!” – as a mute logo filled the night sky.

As coloured lights shone at various points up the Thames, leading to more fireworks above Wembley Stadium, the BLM movement was recognised with viewers seeing its clenched-fist symbol, which became recognised worldwide amid the protests which followed the death of Minnesota man George Floyd in police custody in May.

Finally, the show ended with a ecological rallying call in the much-loved voice of Sir David, reminding all of a reality shown so starkly in the past 12 months – the fragility of life on earth.

“With a new year comes the opportunity for change, and if we act in 2021 we can make a world of difference. Together we can turn things around. Together we can restore our fragile home, and make it a happy new year for all the inhabitants of planet Earth.”

New Year’s Eve celebrations all around the world have been muted due to strict coronavirus measures.

Some major cities cancelled or scaled-back their traditional celebrations, but a handful of places without active Covid outbreaks carried on like normal.

Festivities are being particularly muted in Europe, amid fears over a new more contagious strain of the disease.

Australia was among the first nations to ring in 2021 because of its proximity to the international date line. In past years one million people crowded Sydney’s harbour to watch fireworks. Instead, most watched on television as authorities urged residents to stay home and the country’s most populous states, New South Wales and Victoria, battled new Covid-19 outbreaks.

Locations on the harbour were fenced off, popular parks closed and famous night spots eerily deserted. A 9pm fireworks display was scrapped but a seven-minute pyrotechnics show at midnight brought momentary cheer as fireworks spectacularly lit up the iconic Harbour Bridge and its surroundings.

In South Korea, Seoul’s city government cancelled its annual New Year’s Eve bell-ringing ceremony in the Jongno neighbourhood for the first time since the event was first held in 1953, months after the end of the Korean War. The ceremony normally draws an estimated 100,000 people and is broadcast live.

Authorities in coastal areas of eastern South Korea closed beaches and other spots where hundreds of thousands of people typically gather on New Year’s Day to watch the sunrise.

Cities and countries that have managed to control the coronavirus got to celebrate.

New Zealand, which is two hours ahead of Sydney, and several of its South Pacific island neighbours that also have no active Covid-19 cases held their usual New Year’s celebrations.

Zero-emissions truck of the future set for tests in London