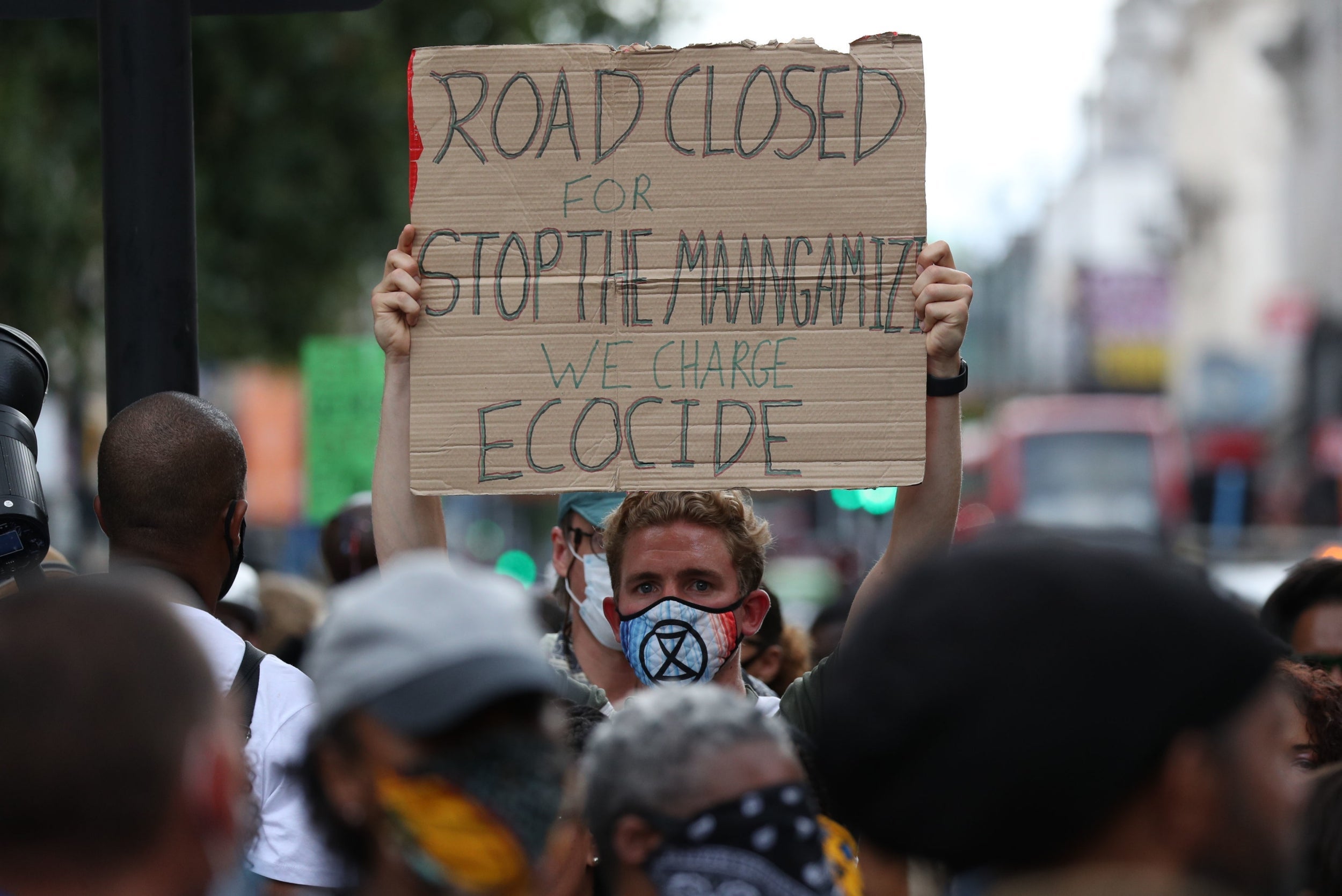 Scotland Yard thanked protesters in Brixton for a “largely peaceful” rally after only three people were arrested.

During the afternoon, a large crowd stopped traffic and forced motorists to turn around while marching on the A23 Brixton Road.

It came after a coalition of groups including Afrikan Emancipation Day Reparations March Committee, Rhodes Must Fall Oxford, and Extinction Rebellion warned they would block the road from Max Roach Park to Windrush Square and occupy the area for the day.

Organisers planned to shut down a major road through the centre of Brixton in protest against a lack of action on the issue of reparations for slavery.

On Friday Scotland Yard said that, while the majority of attendees would be congregating for a “family-friendly, socially distanced day of activities and learning”, it was imposing an 8pm curfew and other restrictions on the event due to the road-block plans.

Most protesters stuck to the curfew and after the event drew to a close, the force thanked attendees for their peaceful protesting. Recent rallies in the capital had turned violent with police arresting hundreds of demonstrators.

Deputy Assistant Commissioner Laurence Taylor in charge of the policing operation today said: “The gatherings today have been largely peaceful and we thank our communities for working with us to ensure the voices of the community could be heard safely and done so responsibly to ensure the safety of all”.

Only three people people were detained on Saturday afternoon a man for affray, another man for assault on an emergency service worker and a woman for a racially aggravated assault.

Crowds of people listened to music in Windrush Square – where the event began – watched speeches and observed a three-minute silence to mark the event, which is in its seventh year.

Held on August 1, it marks the passing of the 1833 Abolition of Slavery Act, according to organisers.

A coalition of groups were involved in the event on Saturday, including Stop The Maangamizi: We Charge Genocide/Ecocide, the Afrikan Emancipation Day reparations march committee and the Rhodes Must Fall Oxford campaigners.

Protesters, floats with speakers and people on motorbikes spilled out onto Brixton Road shortly before 4pm and began to march to nearby Max Roach Park.

Antoinette Harrison, who lives in nearby Clapham, praised the “unity” of the event as she marched with her cousin and cousin’s children.

On why she chose to join, the 38-year-old said: “We are tired. And I was just saying, our parents have gone through, we’re going through this, and I don’t want our next generation to. It’s got to come to an end.”

She added: “What’s lovely about it is there’s such unity.

“It’s not just the one race, like it was back in the day, now it’s whites, blacks, Hispanics – everyone.”

Asked if she had any concerns about Covid-19 while attending, Ms Harrison, who has been protesting since earlier in the summer, said: “This is a pandemic – racism and not having justice.”

A large number of Metropolitan Police officers observed the event, with some attempting to move demonstrators, many of whom were wearing masks, off the road and onto the pavement.

Ahead of the demonstration, the force said blocking the road would cause “serious disruption” to Brixton and the surrounding area because it is used by hundreds of bus routes and thousands of motorists.

A number of conditions were imposed on the demonstrations within areas such as Windrush Square and outside Brixton Police Station, stipulating that attendees must not spill into nearby roads and any event must finish by 8pm.

The Metropolitan Police said that the time limit was set so that officers could separate those attending the demonstrations from people attending other gatherings or unlicensed music events.

It also said that gatherings of more than 30 people will be in breach of the Health Protection (Coronavirus) Restrictions and its decision to impose conditions did not mean the assembly in breach of these regulations was authorised by police. 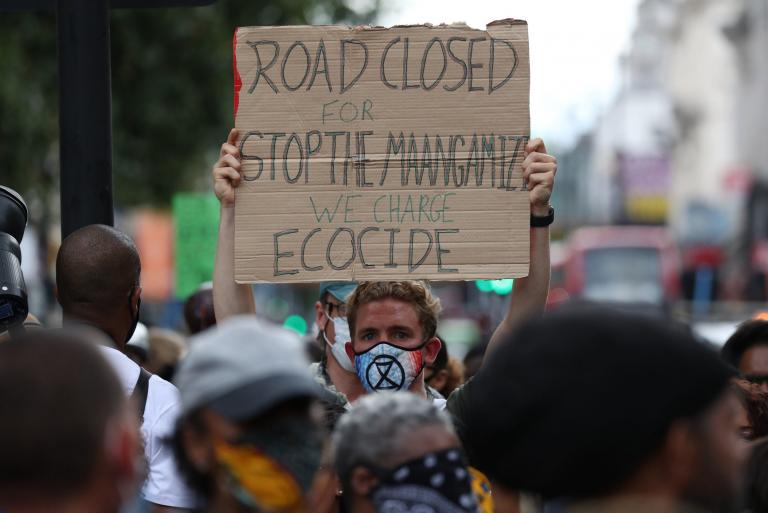 Buses 'deserve priority over everything else' on London roads, TfL strategy chief says

Over 200 UV light devices will be installed on 110 escalators across the Tube network. As the hunt for a coronavirus vaccine ploughs on ahead, cutting-edge technologies are being employed to help fight the virus in the interim – and now, we’ll be seeing them on the Underground. More than 200 UV light sanitising devices […]
The post UV Lights Are Being Installed At London Underground Stations To Help Kill Viruses appeared first on Secret London. Secret London …

London’s 33 local authorities will share £218 million — but the amounts vary from £14.5 million in Tower Hamlets and £12.6 million in Newham to £3.8 million in Redbridge Evening Standard – London…

One Hercule Van Wolfwinkle is taking the media by storm with his avante-garde pet portraits, raising money for a homeless charity. It’s certainly not his day job, but perhaps it should be. The artist known as Hercule Van Wolfwinkle has created quite the stir with his delightful impressions of peoples’ pets. In exchange for one […]
The post These Unconventionally Adorable Pet Portraits Have Raised Over £10,000 For Charity appeared first on Secret London. Secret London …

Hyde Park is where you’ll find Britain’s first pet cemetery but beware, it may be haunted… Nestled within the bushes of Victoria Gate Lodge’s garden is the secret pet cemetery of Hyde Park. This pint-sized graveyard was the first of its kind in Britain and dates all the way back to the 1880s. Dogs, cats, […]
The post This Tiny Graveyard May Be Haunted By The Spirits Of Hundreds Of Pets • Hyde Park Pet Cemetery appeared first on Secret London. Secret London …