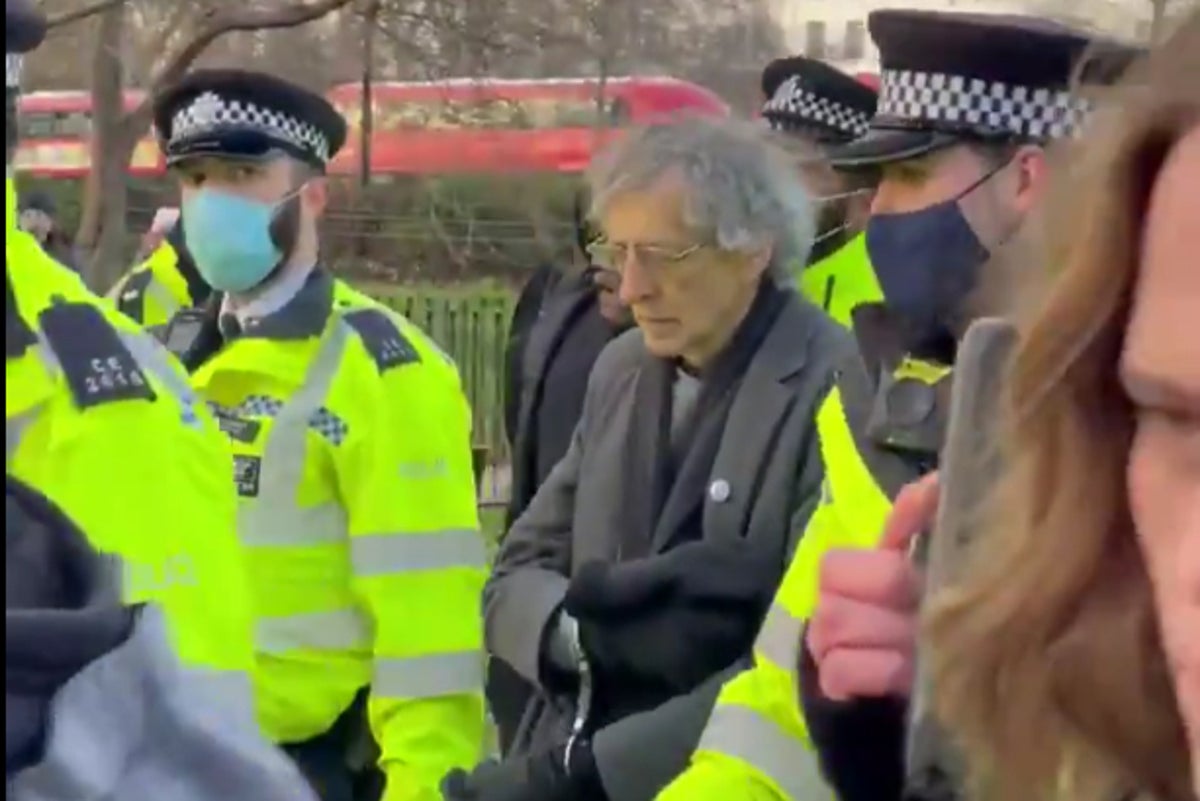 iers Corbyn appears to have been arrested again after being part of an anti-lockdown protest at Speakers Corner as Covid infections hit a UK record high.

Footage shows protesters clashing with mounted police officers as the protest attended by hundreds of activists was dispersed under coronavirus rules.

A Metropolitan police spokesman said that the force made 17 arrests in an attempt to clear the political action from Hyde Park.

One young man can be seen goading officers calling one a ‘fat pig’ as they approached.

Protesters at the event attended by the former Labour leader’s brother, tweeted that one man was arrested for hugging another.

Piers Corbyn who has already been found guilty of breaking Covid-19 laws was led away in cuffs as people chanted ‘free Piers’.

Dr Matthew Lee said he was “disgusted but mostly heartbroken” after filming the group outside the hospital where medics battled to save Prime Minister Boris Johnson’s life last year after he contracted coronavirus.

The Metropolitan Police special events team tweeted: “Officers continue to engage with groups of people who have gathered in the #HydePark area.

“A number of people have been arrested under Health Protection Regulations and taken into custody. We urge those in the area to leave immediately.”

They added: “At around 1pm, four people were arrested under Health Protection Regs having gathered in Hyde Park near Marble Arch.  Officers will take enforcement action where we see clear breaches of the Tier 4 rules. It’s up to all of us to make the right choices + slow the spread of the virus.”

In December Piers Corbyn was found guilty of breaking coronavirus laws during an anti-lockdown protest at London’s Hyde Park.

District Judge Sam Goozee found the charge proven that he breached coronavirus rules during a different gathering at Speakers’ Corner on May 16.

Corbyn, brother of former Labour leader Jeremy Corbyn, wrote in his notepad as the judge delivered his verdict following a two-day hearing at Westminster Magistrates’ Court.

Returning his decision, the judge said: “Without the regulations in place, your conduct would have been lawful.

“But the enforcement of regulations was necessary for public health.

“Police took a measured response. You, however, didn’t engage with police – police action in arresting you was necessary and proportionate.”

Corbyn was handed an absolute discharge – meaning he will not be fined or face any further punishment – after the judge heard he had spent 12 hours in custody after being arrested.

Prosecutor David Povall described how Corbyn, 73, was a “poster boy for disparate groups” protesting at the time.