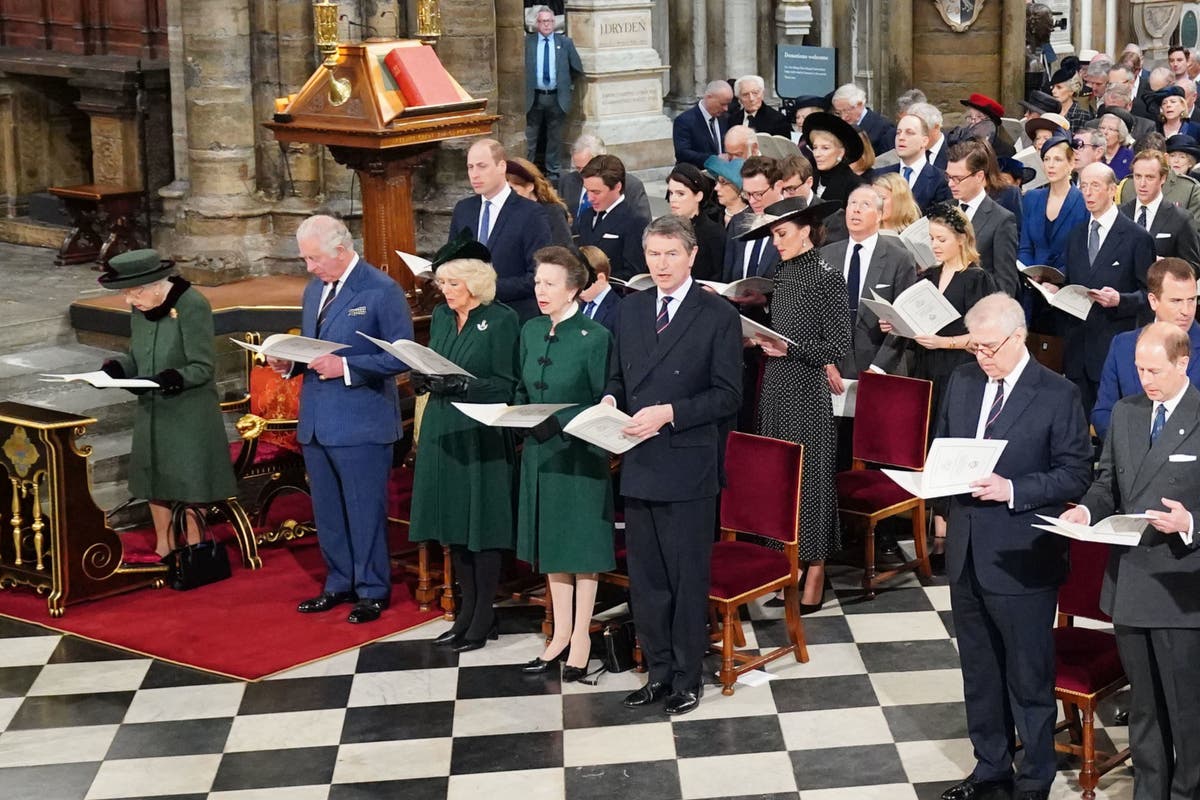 The service has now finished

The service of thanksgiving has come to an end, with members of the royal family leaving Westminster Abbey.

The Queen, 95, was accompanied by the Duke of York to leave the abbey.

Singing of the national anthem

The British national anthem, God Save The Queen, was sung at Westminster Abbey just before the thanksgiving service ended.

The Queen, 95, was escorted by her son Prince Andrew out of the memorial service via Poets’ Corner.

She greeted Gold Award Holder of the Duke of Edinburgh’s Award, Doyin Sonibare, and the Dean of Westminster, on her way out.

The monarch is understood to return to Windsor Castle.

Following the Dean of Windsor’s address, the choir sang Te Deum in C by Benjamin Britten.

The hymn was originally selected by the Duke of Edinburgh when he was putting his own instructions together for his funeral service.

The memorial service is featuring elements he planned for his own funeral which were forbidden due to Covid-19 restrictions in April last year.

In line with government guidelines at the time, there was no congregational singing at the funeral service.

It was also the Duke’s wish that clergy from the Royal Estates of Windsor, Sandringham and Balmoral – known as The Queen’s domestic chaplains – played a part, given his active role in the day-to-day management of the estates.

As this was not possible due to Covid restrictions, the Minister of Crathie Church, the Rector of Sandringham and the Chaplain to the Royal Chapel of All Saints, Windsor Great Park, offered prayers recognising Prince Philip’s energy and spirit of adventure.

Royals dress in dark green in subtle tribute to the Duke

The Queen, the Duchess of Cornwall and the Princess Royal were all dressed in dark green.

It was seemingly a subtle tribute to Philip, whose livery colour was Edinburgh Green.

A number of others throughout the congregation also wore the shade, including Duke of Edinburgh Gold Award holder Doyin Sonibare who delivered a special tribute about the effect Philip’s youth scheme had on her life.

Readings to honour the Duke

The first reading of the service was read by the Rt Hon Lord Wallace of Tankerness QC. He recited the First Lesson, Isaiah 40:25-31.

The Second Lesson, Philippians 4:4-9, was read by the Rt Rev and Rt Hon Dame Sarah Mullally DBE, Dean of Her Majesty’s Chapel Royals.

The 95-year-old monarch has been actively involved in the planning of this service of her husband of 73 years.

The congregation then sang the hymn All Creatures of our God and King.

The Very Reverend Dr David Hoyle, Dean of Westminster has paid tribute to the Duke of Edinburgh in an opening address.

He described Prince Phillip as “a man of rare ability and distinction, rightly honoured and celebrated, he ever-directed our attention away from himself.

“He put privilege to work and understood his rank as a spur to service.

“Working at pace, with so many claims on his attention, he encouraged us to focus, as he was focused, on the things that matter.”

Earlier, the Prince of Wales and Duchess of Cornwall arrived before the Cambridges and their children.

Charles and Camilla followed tradition and greeted the abbey’s chapter and a few minutes later the Duke and Duchess of Cambridge arrived with Prince George and Princess Charlotte.

William and his son walked along the receiving line shaking the hands of the clergy and George followed his father’s lead looking slightly nervous.

Kate then followed with Charlotte, putting a hand on her back and ushering her smiling daughter forward as she was introduced to the men and women, but she also looked a little apprehensive and at the end clutched onto her mother’s hand as they were led to their seats.

In a tribute to Prince Philip’s legacy, Westminster Abbey heard from a Gold Award Holder of the Duke of Edinburgh’s Award.

Doyin Sonibare said that “over the years, the award remained a prominent part of my life”.

She credited the award with helping her get her first job. Ms Sobinbare told the service: “All the answers in my CV and interview were all related to work I had previously done with the award.”

“On reflection, I never thought I could do half of the things I have done in the last decade, yet I’ve been able to do so because of the opportunities presented to me.

“In 1956, when The Duke of Edinburgh created the award, he had a vision to create a programme which supported the development of young people all over the world. Today, you’ve learnt how his legacy has impacted me and how it will continue to impact future generations to come.”

Queen accompanied to seat by her son Prince Andrew

The monarch, 95, dressed in green, was accompanied by her son Prince Andrew as she arrived at the thanksgiving service for her husband of 73 years.

As they walked through the famous Poets’ Corner towards her seat in the abbey, in a small procession, the monarch held onto her son’s elbow with her left hand and had a walking stick in her right.

They walked at a slow but steady pace both looking ahead, and at the end of the aisle they separated – with Andrew giving a last glance to his mother as she turned right.

After the first hymn, Charles could be seen leaning over to speak to the Queen seated next to him.

It is her first public appearance in five months, and since she recovered from coronavirus.

The Standard will be bring you live coverage of the Duke of Edinburgh’s thanksgiving service at Westminster Abbey as they happen.

Ahead of the service, a crowd congregated beside barriers near the entrance to the abbey in an attempt to catch a glimpse of royal family members making their way inside.

The Queen is remembering her husband of 73 years at the ceremony.

Also in attendance in Prince Wales, the Duchess of Cornwall, the Cambridges, Prince Andrew and other members of the royal family.

Nicola Sturgeon, Mark Drakeford and Sir Jeffrey Donaldson were photographed as they made their way into the abbey.