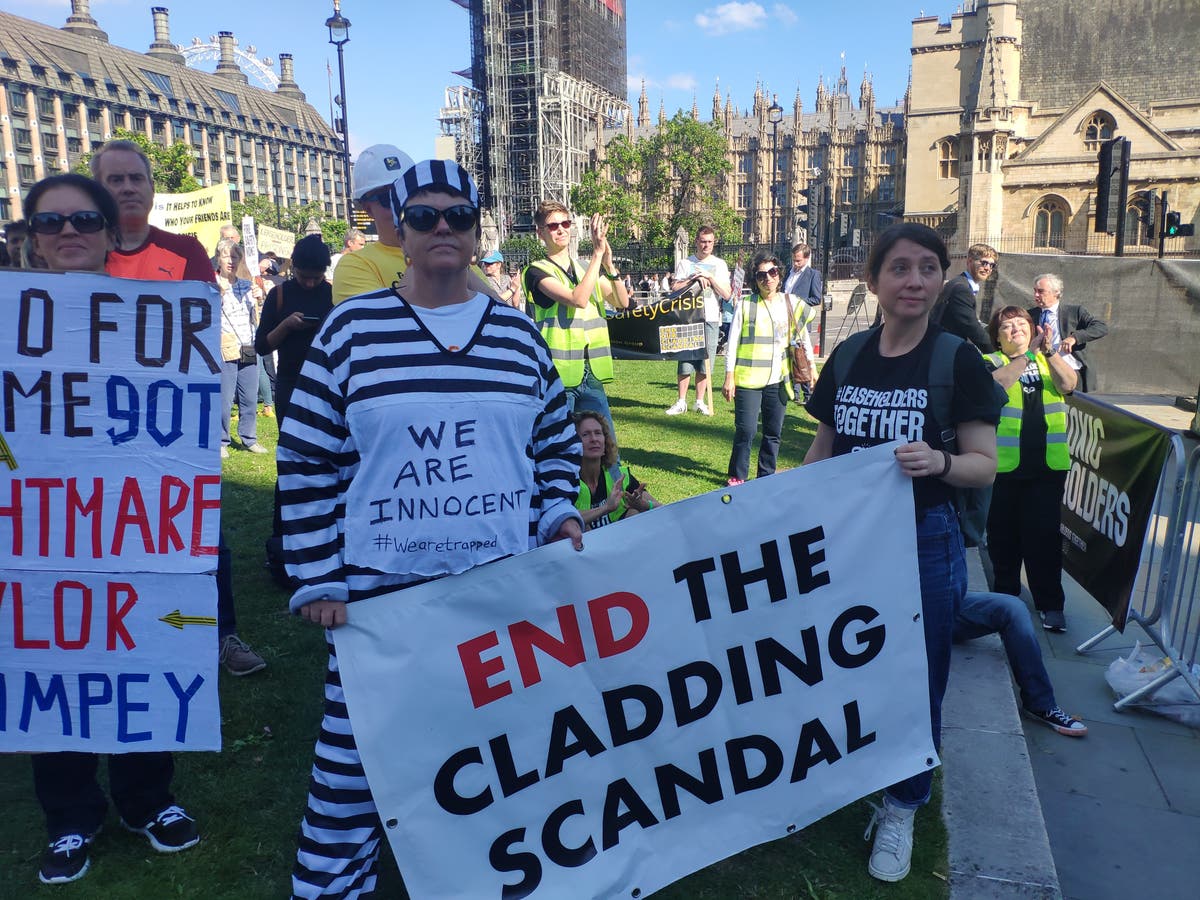 undreds of demonstrators took to Parliament Square on Thursday to call for an end to the ongoing building safety crisis just days after it was revealed there are now more than 1,000 affected buildings in London.

Mayor of London Sadiq Khan was one of several politicians to address the crowd from a makeshift stage where he urged building owners to provide more transparency about building safety to current and prospective residents.

Thousands of Londoners remain trapped in unsafe buildings, many of whom struggle to access safety information about their homes such as Fire Risk Assessments or external wall “EWS1” forms.

While the proposed Building Safety Bill would make it mandatory for this information to be shared, Mr Khan has called on building owners and landlords to “rebuild trust” with leaseholders by voluntarily sharing safety information with them.

Mr Khan said: “More than four years on from the Grenfell Tower fire, the events of that terrible night continue to cast a long shadow over the lives of thousands of Londoners whose faith in the safety and security of their home has been stripped away.

“We cannot go on like this. Building owners must act now to rebuild trust with leaseholders. This can only be achieved through communication and transparency, accompanied by robust changes to the building safety regulatory system.”

In an open letter to building owners, Mr Khan stressed Fire Risk Assessments are the best way of determining whether a building is safe or not. He said EWS1 forms are “are crucial for residents who want to remortgage, staircase or sell their properties”.

Liam Spender, a lawyer and member of the UK Cladding Action Group, said greater transparency would be welcome as leaseholders are often “ignored or lied to”.

He said: “I think more transparency would help. Since I became involved in the campaign, I’ve heard a lot of stories, and the story you most often hear is leaseholders not being told anything. So, we’re either ignored or lied to by building owners and their agents. Whether that’s because they don’t know themselves or are just disorganised, it’s because they can get away with it. The law allows them not to tell us anything, so I think transparency would be welcome going forward.”

Mr Spender, who himself lives in a property affected by cladding, also said the property developers who construct buildings that contain fire risks should be taxed to raise money for grants that would allow remediation work to be carried out.

He said: “There should be a proper system of sorting buildings by risk, so we fix the highest risk buildings, and the money should come from taxes on developers.”

The campaigner explained, as the building he lives in is below 18 metres in height, he and the other residents in the building are unable to apply for money from the Government’s Building Safety Fund to have cladding removed.

A spokesperson from the Ministry for Housing, Community and Local Government said: “Our absolute priority is making sure residents are safe and feel safe in their homes, and we have put in place over £5 billion to remove dangerous cladding from the highest risk buildings as quickly as possible.

“It is essential that building owners take swift action to fix dangerous cladding and the government will fund every eligible application to the Building Safety Fund. So far, we’ve processed over 600 building applications, with estimated remediation costs of £2.5 billion, and we are progressing the remainder as quickly as possible.

“Ninety-six per cent of high-rise residential buildings identified as having unsafe ACM cladding have been fully remediated or have works under way and whilst any fire should be avoided at all costs, the view from independent experts is that there is no evidence of a systemic risk of fire in blocks.”

London Tube Strike 2022: How to get around the capital during disruptions on the Underground