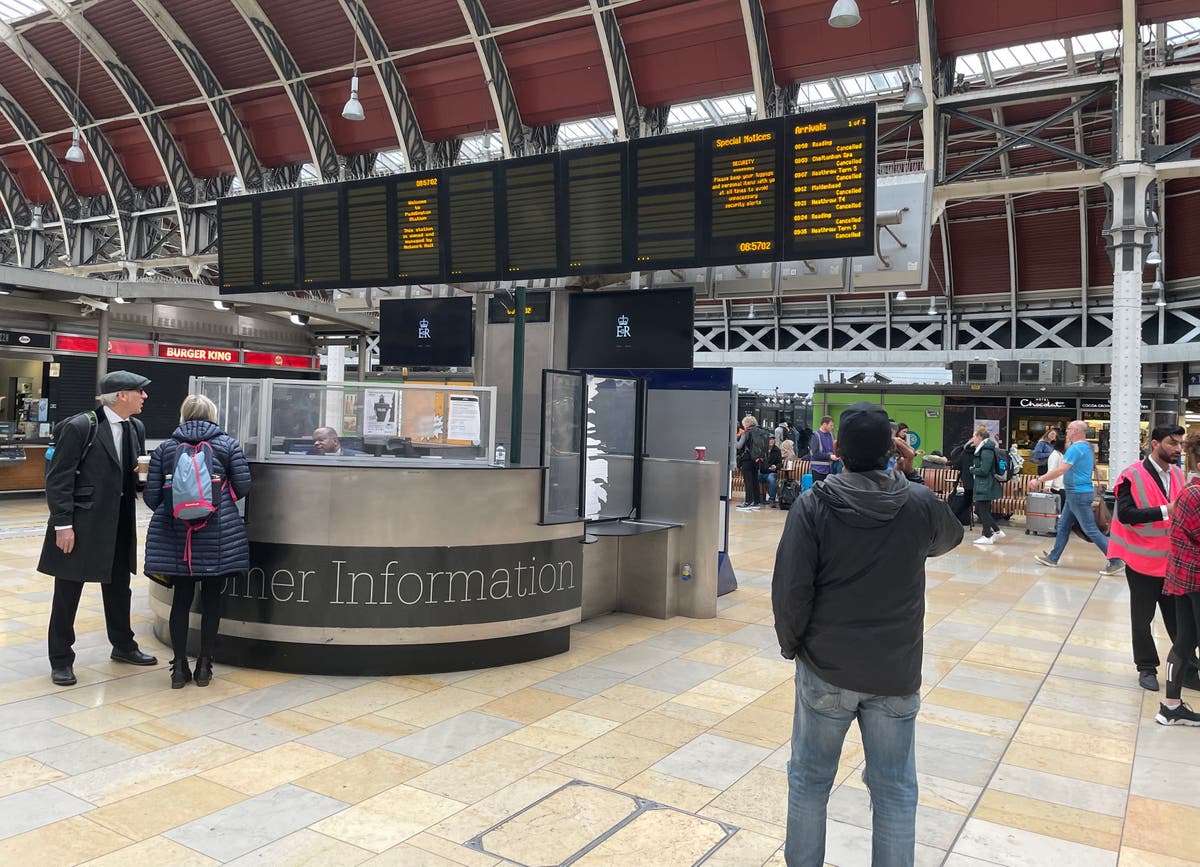 Huge queues were seen at Waterloo station on Monday evening for services to Reading following severe disruption at Paddington during the Queen’s funeral.

Mourners returning home from central London faced travel chaos after services in and out of Paddington were suspended from 6.30am.

Hundreds of thousands of people travelled to the capital to pay their respects to Britain’s longest-serving monarch at a state funeral on Monday morning. Many affected passengers planned to be in London for the start of the day’s events but were delayed for several hours, with some forced to watch proceedings on their phones.

Footage posted to Twitter by the BBC’s Tom Edwards showed a long queue stretching through Waterloo station just after 5pm.

It follows severe disruption at Paddington, where all services were suspended from 6.30am because of damage to overhead electric wires near Hayes and Harlington station. The cancellation of services forced those travelling back to Reading to use the South Western Railway route from Waterloo.

Services run by GWR, Heathrow Express and the Elizabeth line have also been disrupted all day.

A spokesperson for South Western Railway tweeted: “A queuing system is in place at London Waterloo for all services to Reading, as we accommodate extra demand from the GWR network.

“Trains are very busy, so please allow extra time for your journey.

“Tickets will be valid on later services.”

Bev Palfreman said she was “absolutely gutted” about missing the start of the funeral.

The 61-year-old from Oakhampton, Devon, said: “The Queen has just been there throughout the whole of my life. This was the only thing I wanted to do.”

A Network Rail spokesman said: “We are very sorry for the disruption which we expect to continue throughout the day.

“We will continue to update passengers as the situation develops.”

Network Rail said there were no problems affecting London’s other major stations.

Millions of people in London, the UK and around the world paid their respects to the Queen on Monday morning at an emotional state funeral in Westminster Abbey.

The Archbishop of Canterbury hailed the Queen’s “abundant life and loving service” as he delivered the sermon, adding: “She was joyful, present to so many, touching a multitude of lives.”

Following the service, her coffin was carried in a procession from the abbey past Buckingham Palace to Hyde Park Corner. She later made her final journey to Windsor Castle, where she will be laid to rest next to her late husband the Duke of Edinburgh.