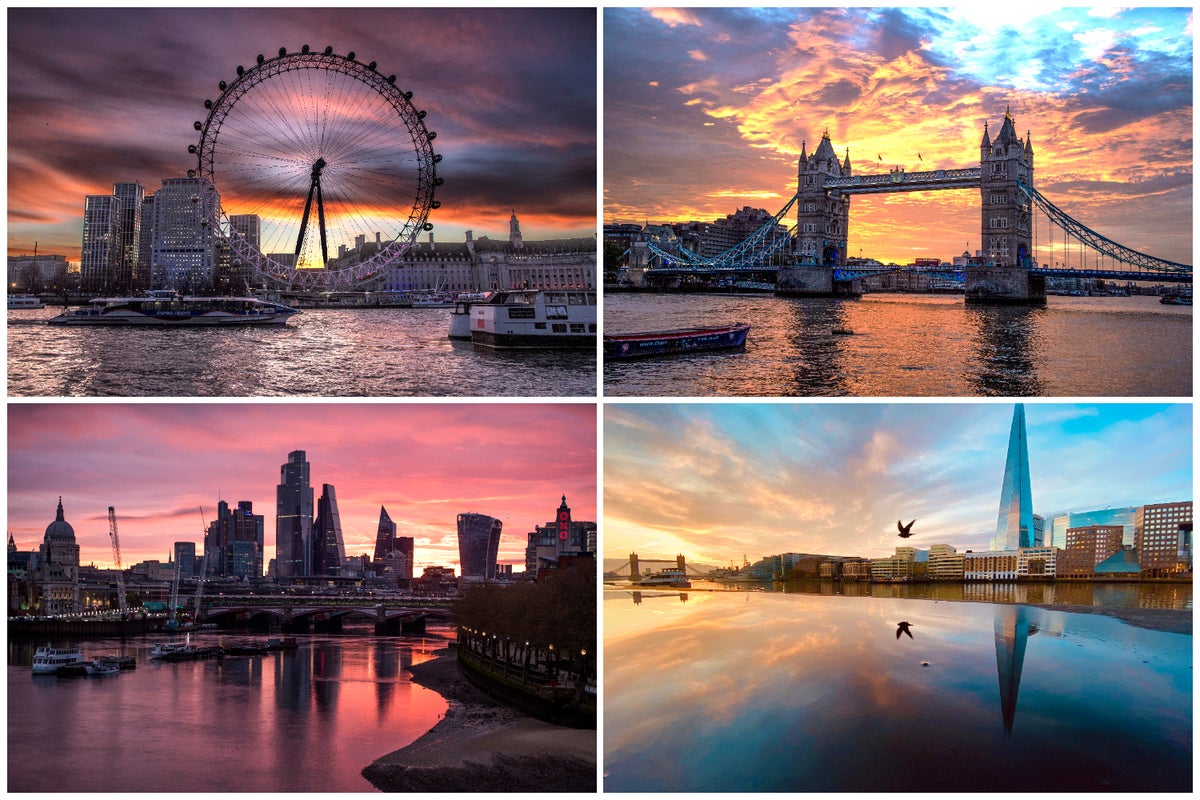 020 has been a tumultuous year for London, with a pandemic bringing the metropolis to a standstill, the constant changing of Tiers, Christmas cancelled, Megxit and Brexit  – there has always been one constant – our fantastic photographer Jeremy Selwyn capturing a stunning sunrise at the crack of dawn.

Jeremy Selwyn has worked as a staff photographer on the Standard for the past 34 years.

He has been lauded for his powerful news photography, including his images of the tragic fire at Grenfell Tower in 2017, for which he won the National News Photographer of the Year at the UK Picture Editors Guild Awards.

While most people are asleep, Mr Selwyn is up at 4am to capture beautiful sunrises across the capital as he waits for his next job of catching Boris Johnson on his morning jog or the huge breaking news stories of the day.

This year Mr Selwyn captured sunrises over the eerily empty financial district of London to the hopeful swimmers in the Serpentine braving an early-morning dip.

One picture, captured on the remnants of the old Wembley stadium shows a bee pollinating a thistle one June morning. Jeremy’s eye makes it seem like it was taken in the Cote d’Azur you could never guess it was taken overlooking the A40 dual carriageway in Northolt.

He said: “There’s so much debris I like it there, there’s heather growing there too. It really could be anywhere in the world.”

Mr Selwyn has taken photos of brave Londoners some with no choice but to go to work among rising R rates. He calls the pandemic “the biggest story” he has ever covered.

“I have noticed people have been looking across at the sunrises more in the pandemic so they do feel a bit more optimistic,” he said.

“There is a lot of hope that can be conjured up with a sunrise.

“People had so much hope this could be the last sunrise of the pandemic and that it was getting back to normal but then – bang – we are back to where we started.”

Mr Selwyn denied ever enjoying having the freedom of London to himself to shoot the atmospheric shots of a city deserted over several lockdowns.

He said: “It’s not been good to be out and about in Londinium. Hitting all the stations for that morning’s edition.

“I have to wear a mask that’s all you can do and keep your fingers crossed. You have to do what you do.

“It’s been horrible, though, no-one wants to see London empty. We want it back to normal and everyone wants a normal life.”

The veteran war reporter who has covered Bosnia, Lockerbie, and the horrors of Grenfell Tower admits he is enjoying the positive feedback he gets for the sunrises on his personal Instagram saying ”a sunrise is a symbol of a new day.”

“But clear days aren’t so good either, there’s nothing for the sun to light up and make that deep red colour.

“The weather is the ultimate ruler of a sunrise.

“I have seen a lot more people looking over at the sun reflecting a bit more. It just brightens up their day.

“In the middle of summer there is no-one around, pandemic or no pandemic, when dawn hits at 4am.

“People all come out in the winter, the part-time sunrise brigade, to take pictures at dawn at 8am.”

When he’s not taking shots of a rare heron gobbling a fish in Hyde Park as the sun rises behind he can be chasing  Boris Johnson around the park on his morning jog.

Mr Selwyn managed to get the first shot of Mr Johnson as he emerged from Downing Street from his second period of self-isolation wearing a bobble-hat.

“He doesn’t mind pictures most of the time but hates people taking pictures of him as he works out. He moves heaven and earth to stay out of shot. But we still get him.”