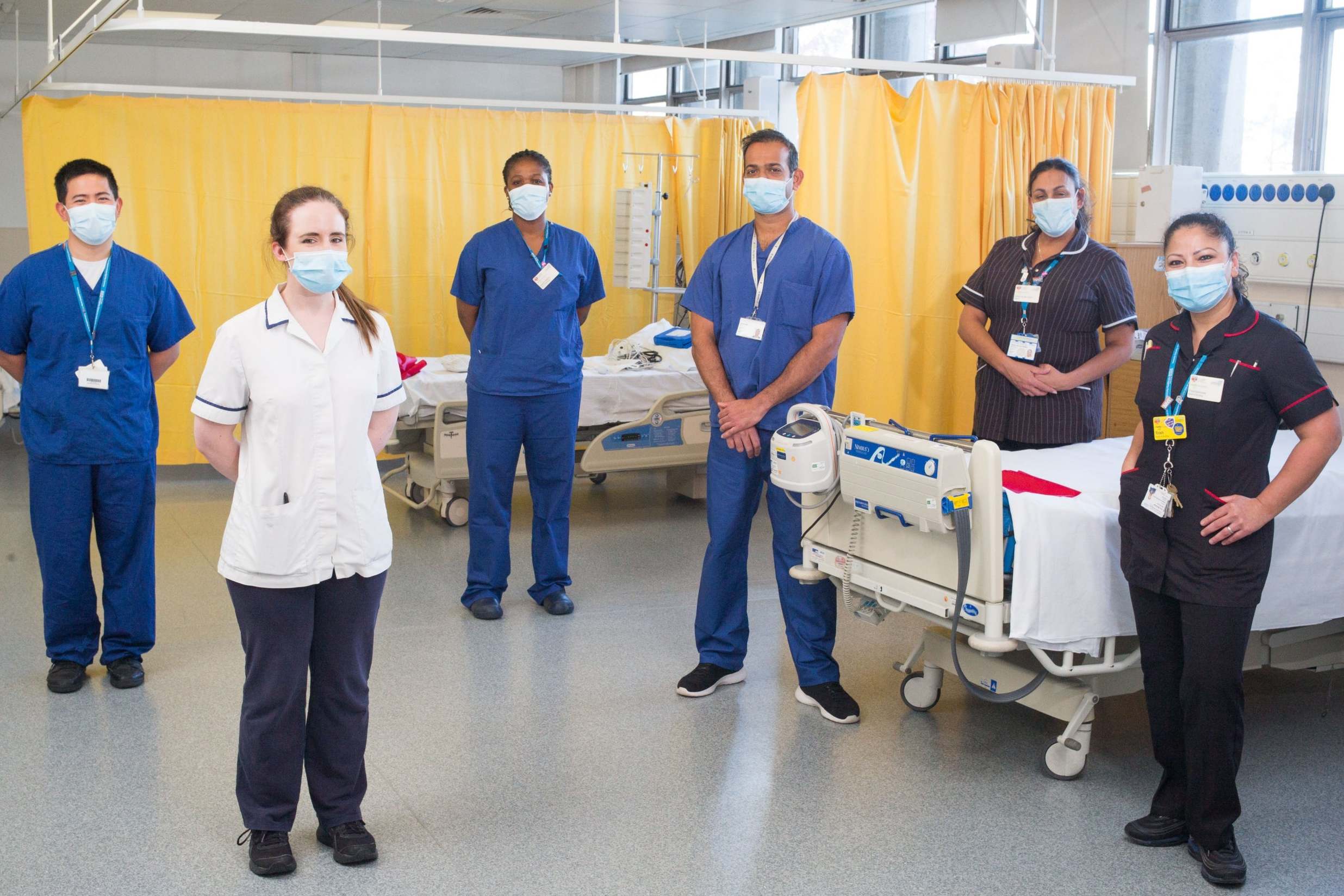 ack in February, a small room was set aside in the A&E department at Northwick Park hospital in case of coronavirus admissions. “We thought, ‘That will do us,’” said emergency department nurse consultant John Ross, unsure whether to laugh or cry as he recalled the naiveté of the preparations.

The first Covid-19 patient duly arrived on March 3. A “tidal wave” followed, with numbers doubling every two days. The hospital, in Harrow, found itself at the epicentre of the UK outbreak. A critical incident had to be declared on March 19, to divert ambulances to surrounding hospitals with spare capacity.

At the peak in early April, there were up to 26 deaths a day at London North West Healthcare, the NHS trust that runs Northwick Park and Ealing hospitals. Due to ethnic diversity, deprivation and the high prevalence of diabetes and hypertension in the community, the trust’s catchment area had become a hotbed of Covid-19.

Four in five ambulances were “red” — meaning the patient inside was suspected to have the virus.

“I don’t think overwhelmed is the right word,” Mr Ross said. “There was a Herculean effort from staff. It was a tidal wave. The staff were making incredible efforts to keep people safe, but it wasn’t sustainable.”

He added: “I would like it to be the greatest effort of our careers but we will see what the winter brings.”

By mid-April, deaths had fallen to single figures. During the summer, the trust went weeks without a Covid-19 fatality. Now Covid-19 is spreading across the country and death is returning. There have been 13 at the trust this month, the three most recent last Thursday. In total, the trust has suffered 632 deaths — the third highest in the NHS.

Still, when the Evening Standard visited Northwick Park last week, staff were united in the belief that they were better prepared for a second wave.

The trust’s critical care capacity has been increased to 46 beds, and can be extended to 87. The A&E at Northwick Park has been redesigned with “red” and “amber” zones.

“If you come in now with a non-Covid- related illness you should never pass a Covid patient,” Mr Ross said. “If you have a serious emergency, please come to us. Don’t be scared to call an ambulance.”

Three of the trust’s doctors — Dr Nuala Lucas, Dr Ganesh Suntharalingam and Dr Gurjinder Sandhu — featured on the Queen’s birthday honours list, itself delayed by Covid-19, for their contributions during the first wave.

Dr Lucas, an obstetric anaesthetist who spent her shifts working on high-risk deliveries and her spare time on Zoom drawing up national guidelines to keep labour wards safe, received the MBE. She said: “I have been a doctor for nearly 30 years. I have never experienced anything like it clinically — the absolute volume of work that was coming through. Seeing young people become sick so, so quickly. It wasn’t just about the older people.”

At the time, there was concern that staff were at risk from “aerosol” vapours emitted by patients when being extubated. As a result, general anaesthetic was avoided if possible — which required careful planning and monitoring of potentially risky deliveries to avoid the need for emergency caesareans.

Dr Lucas, a member of the Obstetric Anaesthetists’ Association, said: “I remember being exhausted quite a lot of the time. The pace of life was 24/7 for quite a few weeks. Your feet didn’t really touch the ground. I do feel we are better prepared clinically. This time we know what we are dealing with. We are in a better place.

“But I think everyone is very tired. The thought of getting through the next few months, people are slightly dreading that. But we will get through it.”

Intensive care wards are empty but ready. Tricia Mukherjee, head of nursing, said: “We are a lot more prepared. We have got a large number of staff who have been trained and exposed to critical care. But until the vaccine is here we are in for a bit of a challenge.”

There are better medicines too — though no “magic bullet” as yet. Dr Suntharalingam, who was awarded the OBE, is also president of the Intensive Care Society. “As time has gone on, our understanding of the disease has increased very rapidly,” he said. “Knowledge of the ways to ventilate people, and of the importance of simple things like turning people on to their stomach, the use of fluids and blood-thinners, and new uses of old drugs, have all come on a long way. We now know that the steroids dexamethasone and hydrocortisone do seem to make an impact on mortality, while Remdesivir seems not to.” Dr Suntharalingam recalled how it was not just nurses and doctors but support staff such as cleaners and porters “who also did not hesitate to scrub up and put themselves in harm’s way”.

The intensive care wards became a “surreal” environment, with doors, corridors and wards draped in plastic sheets to limit the spread of the virus.

Sick patients were helped to have iPad conversations with families prior to being sedated and intubated. Staff held the hands of the dying. No one was left to die alone.

“It was quite a traumatic experience at times for people,” he admitted. Now supplies of “things that come in boxes” such as PPE, ventilators and pumps, are plentiful, but “staffing is the biggest issue”.

Dr Suntharalingam said: “It takes years to train people in critical care, and looking after the very sickest people needs an ICU nurse for every bed, as well as many other staff. Increasing these numbers is going to be a long-term project.

“In a crisis we can, and did, ask people to work differently, but it isn’t sustainable for long periods and we really need the public’s help in avoiding it by following advice and keeping the infection rates down.”

Northwick Park’s emergency department is one of the busiest in London, with 120 ambulances and 600 patients a day. The untold story of the pandemic is how many Covid-19 patients were saved. Across the trust, more than 1,750 have made it home. Dr Jon Baker, the emergency department lead, said: “Our mortality rate is below the national rate. We were below the national average and below the London average, in a good way.”

Last week, about 40 inpatients had Covid-19. They were slightly younger than in the first wave, and included several patients in their thirties and forties with underlying health conditions.

“Half our [Covid] patients are under 50,” Dr Kuper said. “In March it was around a fifth. It’s certainly spreading through the younger population in a way the first wave didn’t seem to.”

He added it was reasonable to assume community rates would feed through to hospitals but “we are not anything like we were in the first wave at present”.

Can they cope once again? “We are very confident,” Dr Kuper said.

“We have had a lot of time to prepare this time. We have got good plans.

We have learned a lot from the first time around, though we can’t be complacent. The tide comes in very quickly. We need to be fully aware and ready to deal with it.”