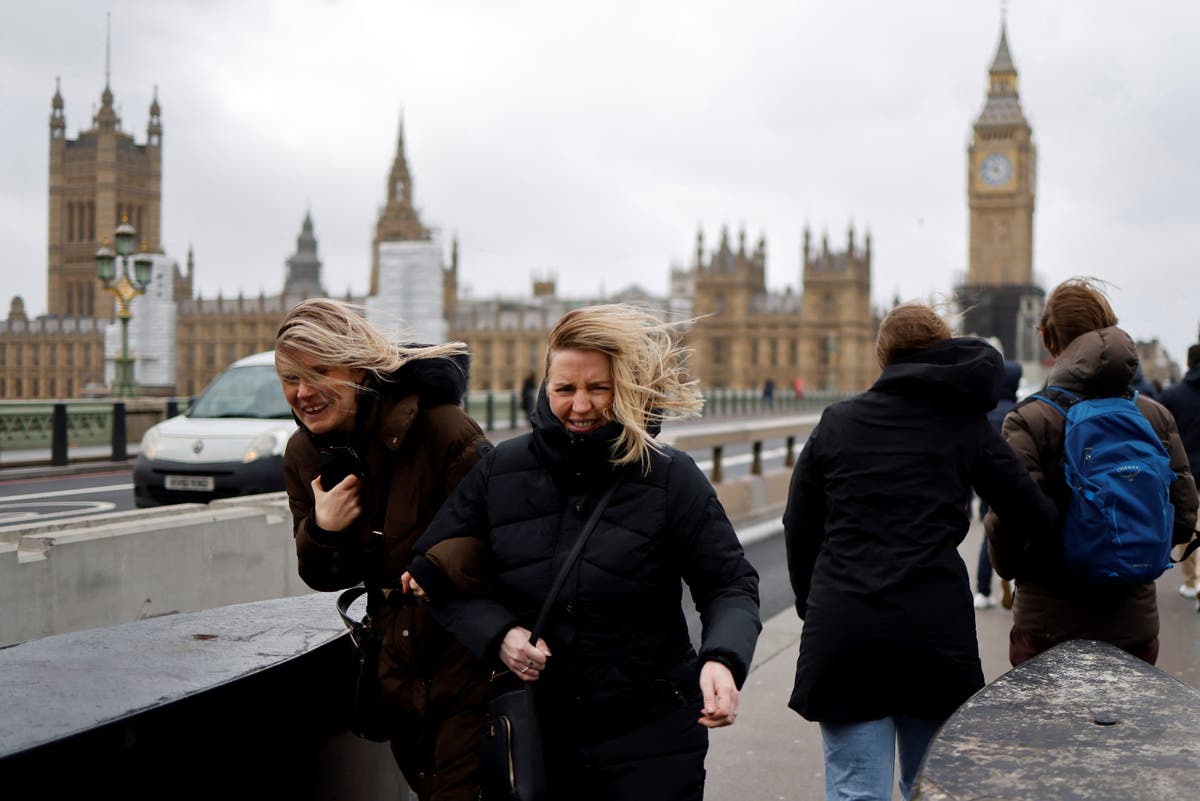 Two people and their dog were nearly killed after a lorry was blown onto their car.

The pair were travelling along the A6, near the village of Dove Holes in the Peak District of Derbyshire, when they were hit.

The pair and the dog managed to survive and were rescued by the Derbyshire Roads Policing Unit.

A fourth casualty reported in the Netherlands

Authorities have reported a fourth fatality caused by Storm Eunice in the Netherlands.

A motorist crashed into a fallen tree near Adorp in Groningen.

He became trapped and then died from his injuries, local police have reported.

A 79-year-old British man has died in the Belgian town of Ypres, it has been reported.

The man died after being pushed from his boat by strong winds.

He was pulled from the water and taken to hospital but later died of his injuries.

Video: Roof of a building in Oxfordshire ‘ripped off’

A roof of a building in Oxfordshire has been ripped off due to the high wind speeds, video has shown.

Forecasters revealed the highest wind speed was recorded at 122mph in the Isle of Wight on Friday.

For large parts of the country, wind speeds between 70-80mph were recorded due to Storm Eunice.

Peray Ahmet, leader of Haringey Council in north London, said: “I was deeply saddened to receive the news that a member of the public has died after a tree fell on a car in Highgate.

“On behalf of everyone at Haringey Council I express my deepest sympathies to her family at this incredibly difficult time.

“Our teams are working tirelessly to clear fallen trees and debris and to secure any structures that pose a risk to the public.

“I urge all residents to follow official advice and be alert to the dangers that come with the extreme weather that continues to affect the borough.”

Insurance losses due to Storm Eunice estimated at £200M

Storm Eunice is likely to cause insurance losses of 200 million pounds ($272 million) to £350million ($476 million) due to property damage, business and travel disruption, PwC UK said on Friday.

“As with Storm Dudley, insurance losses will mainly be in respect of damage to homes, commercial properties and vehicles from falling trees and flying debris,” said Mohammad Khan, General Insurance Leader at PwC UK

Ex-Bond girl Valerie Leon has spoken of her “shocking” experience after narrowly avoiding a falling tree brought down by Storm Eunice’s winds.

The English actress, 78, is best known for her roles in six films of the Carry On series as well as Bond films The Spy Who Loved Me and Never Say Never Again, alongside Sir Roger Moore and Sir Sean Connery.

Millions of people were urged to stay at home on Friday due to safety fears over the impact of Eunice, one of the worst storms to hit the UK in a generation, which has swept across the country today leaving severe damage in its wake.

Leon said it was an “extraordinary” sight as an uprooted tree crushed a car only 20 feet from where she had been outside her home in the London borough of Hounslow.

“It was like a horror movie,” she told the PA news agency.

Peray Ahmet, leader of Haringey Council, paid tribute to the London woman who died after a tree hit a car during Storm Eunice.

The councillor said: “I was deeply saddened to receive the news that a member of the public has died after a tree fell on a car in Highgate.

“On behalf of everyone at Haringey Council I express my deepest sympathies to her family at this incredibly difficult time.

“Our teams are working tirelessly to clear fallen trees and debris and to secure any structures that pose a risk to the public.

“I urge all residents to follow official advice and be alert to the dangers that come with the extreme weather that continues to affect the borough.”

A man in his 20s has died in Alton, Hampshire, after a car collided with a tree, police said.

In a statement Hampshire Constabulary said: “Police were called at 11.49am on Friday to a collision involving a Mercedes-Benz Sprinter pick-up and a tree in Old Odiham Road.

“Two men, in their 20s, were in the vehicle. Sadly the passenger was pronounced dead at the scene. The driver has been taken to Southampton General Hospital with serious injuries.

“The next of kin for both men have been informed and are being supported by specialist officers.

“Officers are investigating the exact circumstances of the incident.”

Over 27,000 homes without power in Cornwall

In Cornwall at least 27,000 properties are without power.

Martyn Alvey, Cornwall Council’s cabinet member for the environment, said: “Storm Eunice has left in its wake a lot of damage and disruption – including power outages for many households across Cornwall.

“While the power companies are doing everything they can to get households back on grid, and the council and our partners are working hard to clean up the debris and damage left by the storm, there will be residents who this evening don’t have power at home.

“We are encouraging people in Cornwall to look out for their neighbours who are vulnerable and might be struggling this weekend.”

In Monmouthshire highway crews have cleared more than 50 fallen trees which blocked roads.
Richard John, leader of Monmouthshire County Council, said: “I would like to thank everyone in Monmouthshire who has avoided travel today – conditions are still looking challenging out there, so it’s wise to avoid any unnecessary journeys.

“Thank you to colleagues who have been working round the clock in difficult conditions to keep everyone safe and to get so many services back up and running for tomorrow.

“I’m incredibly proud of the way that colleagues and residents alike have dealt with the biggest storm we have seen in decades.”