Summer is the time to embrace the open-air cinema life, and there’s one place in London that offers a cinematic experience with a different: a float-in cinema on Regent’s Canal. Keen-eyed observers will note that the Openaire Float-In Cinema has already made one appearance in London this summer, but it’s back from September 8 for another few weeks of films. Happily, we’ve lined your tickets up right here!

It’s a really lovely outdoor screening experience; hop on board one of 16 eco-boats provided by GoBoat, London’s famous picnic boats, and join up your fellow cinemagoers as you watch your favourite films. For the late summer run, films such as Pretty Woman, Mamma Mia and Joker, The Greatest Showman, Bohemian Rhapsody, Toy Story, and Love Actually are all scheduled.

When you arrive you’ll have the chance to drive yourself around Little Venice, before mooring up at Merchant Square where a giant 6x3m hi-res LED video screen will face the water. You’ll be given a set of sanitised headphones to provide high quality audio, and there’ll be snacks and street food available to order directly to your boat. Oh, and with Häagen-Dazs sponsoring the float-in cinema, you’ll also be able to grab something sweet to enjoy during the film!

The food on offer comes from award-winning pasta chef RaviOllie who are serving up incredible Italian food from a pop-up kitchen on the water’s edge. A lovely nod to the local surroundings of Little Venice! Beginning on September 8 and running until October 3, the Openaire Float-in Cinema is predicted to sell out fast—so get your tickets now. If you can’t secure a spot on a boat, there’ll also be a bunch of socially spaced deckchairs along the towpath which are available to book. 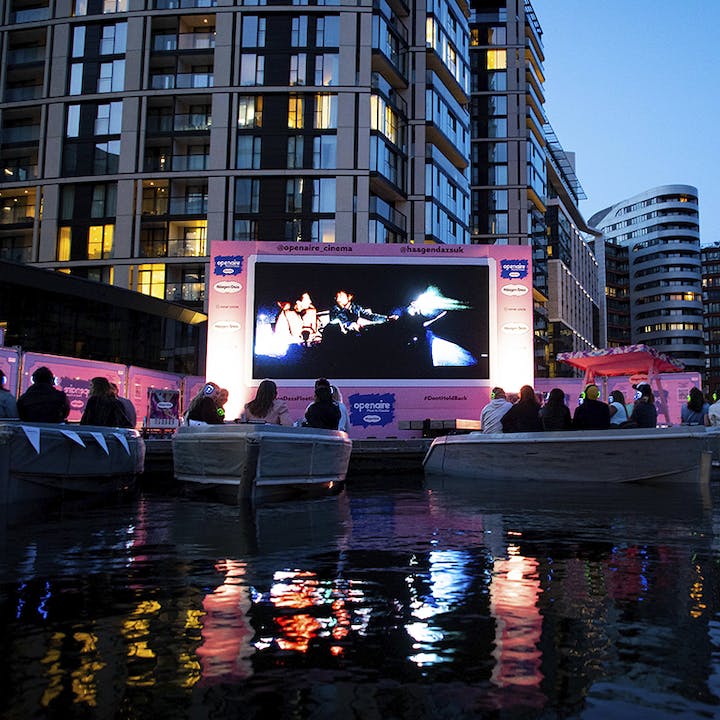 A Happiness-Inducing, Multi-Sensory Museum Experience Is Coming To London

This Spice Girls Boat Party Will Seriously Spice Up Your Life