The London restaurants that received Michelin stars for 2022.

In the culinary world, a Michelin star is still a much-coveted award for any top chef. The anonymous critics of the prestigious guide travel the world, dining at some of the world’s most talked-about eateries, finding the places that deliver (in their admittedly subjective eyes) perfect, consistent cooking. They’ve just unveiled their 2022 guide, and London has once again delivered, with over 60 Michelin star restaurants here in London.

The reviewers’ tastes tend towards the expensive and ritzy, with a few too many deserving-yet-dusty hotel restaurants on the list despite our dining culture becoming ever more informal, independent and inventive. But there’s no denying there are some true ‘bucket list’ meals to be had here, with epic tasting menus served straight to your kitchen-side seat. Many of these Michelin star restaurants offer less terrifyingly-priced meals at lunch; perfect for knocking off work early on a payday Friday and experiencing some cooking from the world’s best chefs. Bon appetit! 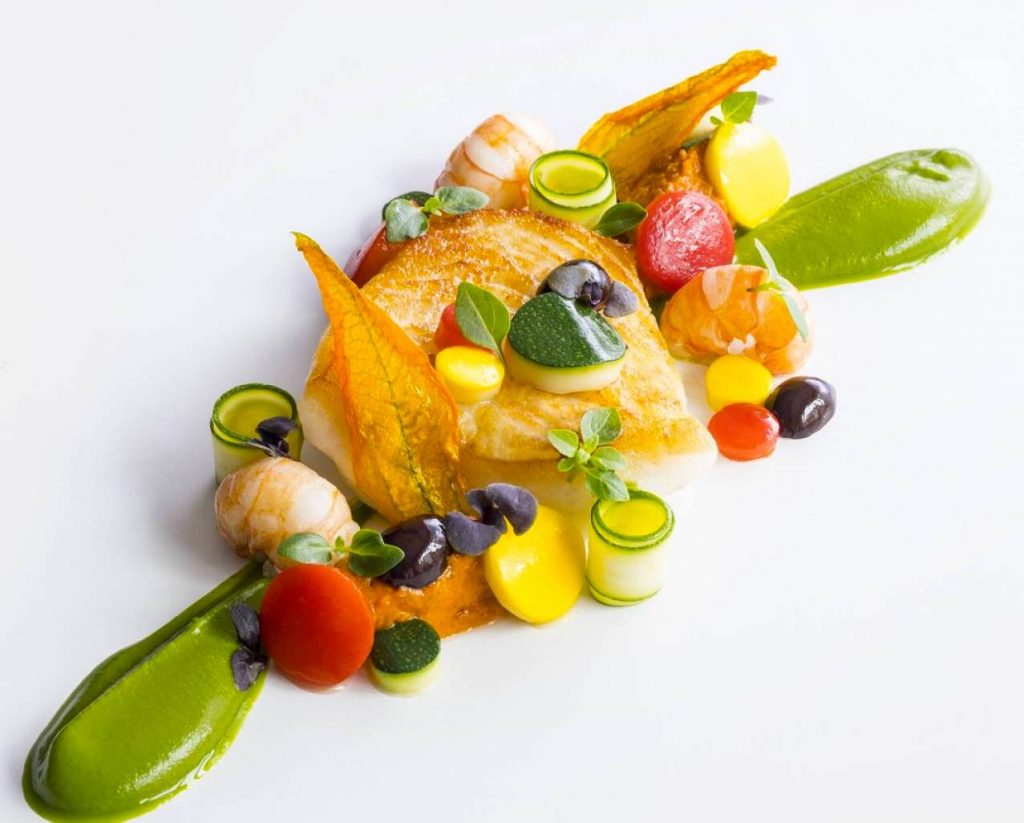 The angriest chef on television really has something to shout about: his flagship restaurant in Chelsea, south-west London, earned the maximum three Michelin stars for 2019, twenty years after it first opened. Dining here currently stands between £120 for the lunchtime “a la carte menu”, and £220 for the “carte blanche” menu – where customers can mix and match between menus!

Is eating in hotels ever really that fun? The Michelin crew seem to think so, bestowing a full three stars on this posh-as-you-like west London restaurant. The tasting menu is £165 (or try the black truffle menu for £240!) but you can sample a three-course lunch for £65. 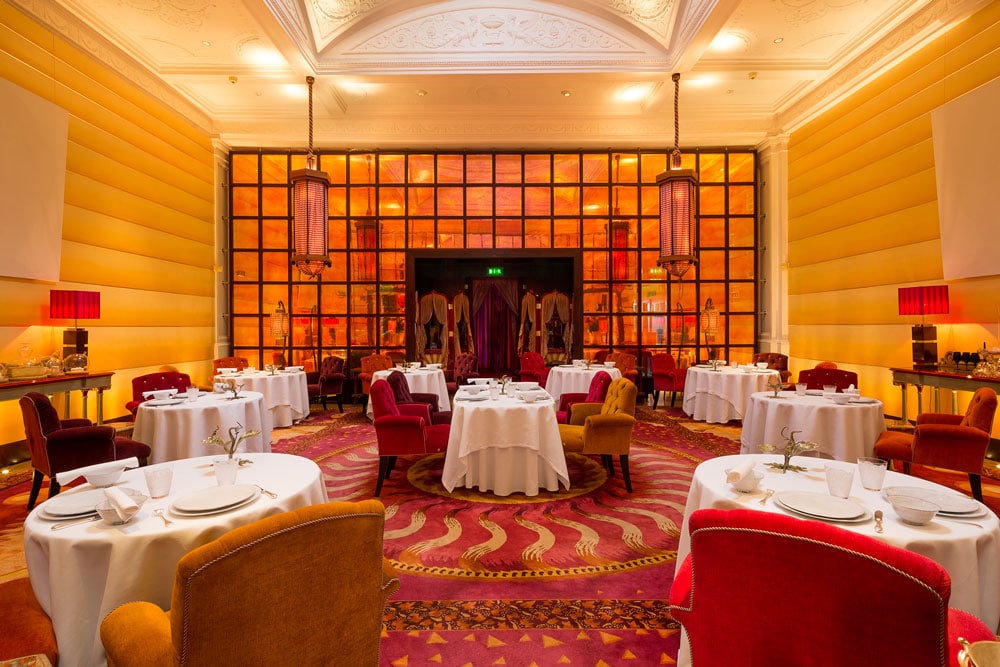 Let us tell you that there is nothing sketchy about this place, which is probably why it joined the handful of three-Michelin-star restaurants in the capital back in 2020. Not to be confused with the (equally opulent) dining rooms downstairs, which serve different menus, the Library is the room to dine in if you want to ‘taste the stars’, enoying a menu of sophisticated French food. A seven-course romp will relieve you of £120, and frankly you’ll just have to deal with it. 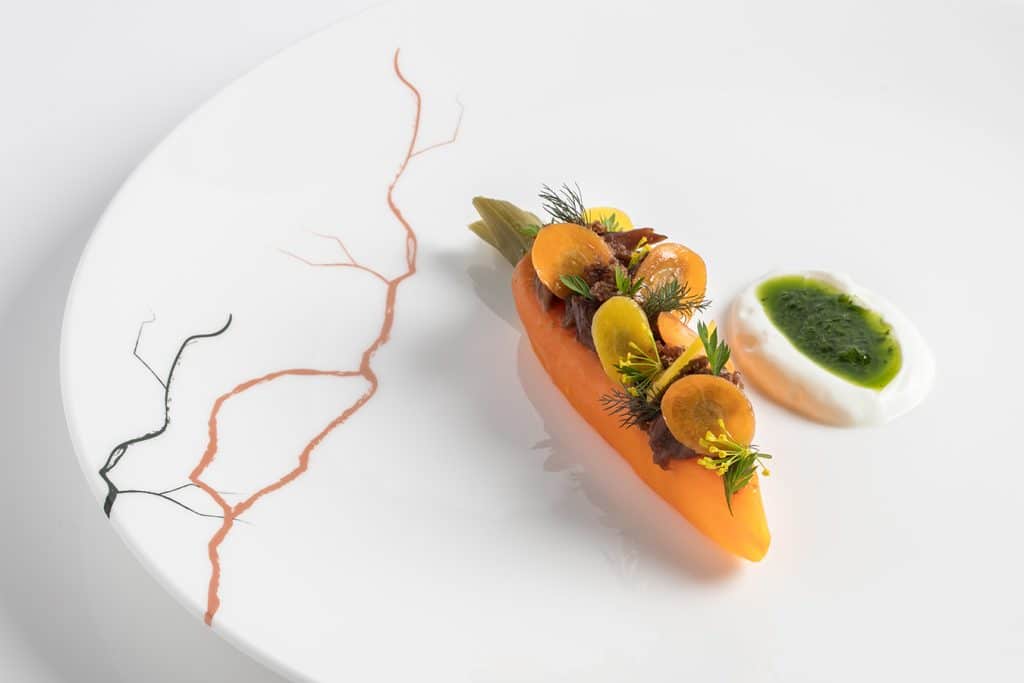 Clare Smyth left Restaurant Gordon Ramsay to do her own thing, which seems to have gone rather well. Her restaurant jumped straight into the big time by earning two Michelin stars in 2019, nary a year after opening – and in 2021, she was been bestowed a third star, elevating Core to a well-deserved place in the tippity top tier of London fine dining. A tasting menu stuffed with British produce will set you back £175.

Connaught blimey! Now rocking three Michelin Stars after last year’s upgrade, Darroze’s restaurant’s star offering is a £185 “taste of winter” menu, but their weekday lunch menu clocks in at £85. There’s also a neat menu where you choose what you want using marbles on a little board. We’re always up for some innovation!

The French establishment saw two stars awarded for the inventive menu from the renowned Anne-Sophie Pic. Located in the Four Season’s Hotel, the restaurant overlooks the Tower of the London and Tower Bridge – a view that is sure to make the food taste all the nicer! While à la carte prices can look a little steep, you can enjoy two courses from £32 Monday to Friday, which for two Michelin-star isn’t too bad!

Clever-clogs cooking from the wickedly-inventive Heston Blumenthal rocked the Michelin folks’ world. The ‘orange’ above, for instance, actually contains a chicken liver and foie gras parfait. Dinner at ‘Dinner…’ will run over £100 before you even order drinks, and a five-course set lunch is £135 on weekdays. 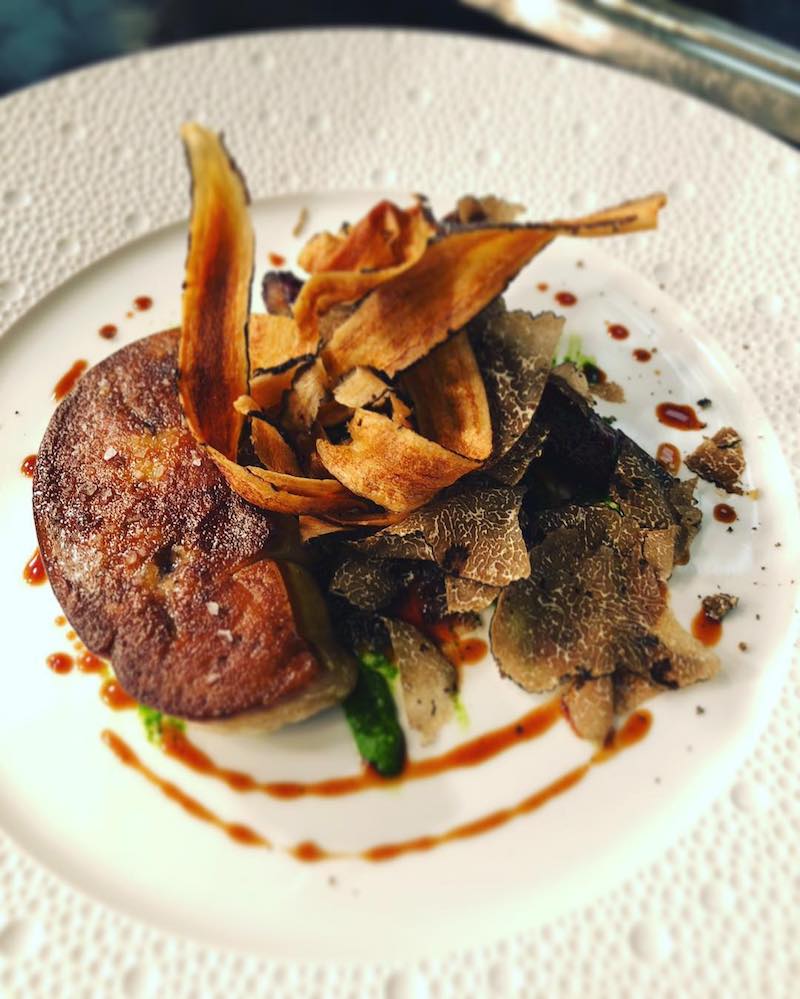 Head here for showstopping plates from legendary chef and skinny-one-off-Masterchef, Michel Roux Jr. The nine-course tasting menu here, with wine, is a wallet-wobbling £265, but the ‘business lunch’ is £69 with drinks – nice. Expense it? It’d be Roux not to… 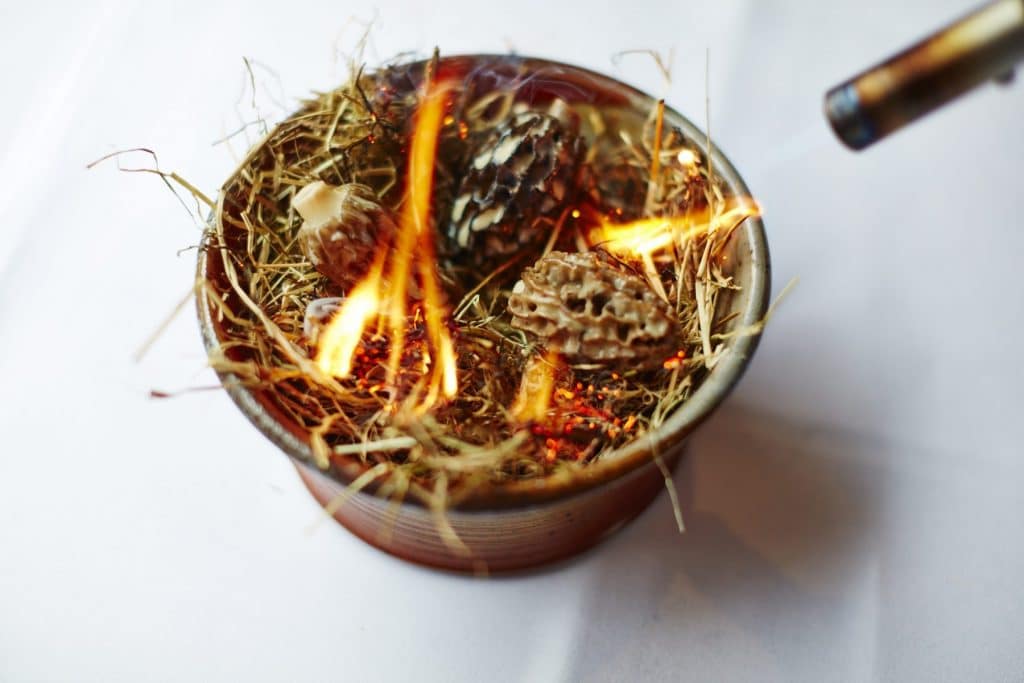 The only restaurant to jump from one star to two back in 2019, Kitchen Table is sort of a two-for-one deal. Bubbledogs serves dogs and champers at the front; at the back is Kitchen Table, where twenty seats surround the head chef, who prepare a new menu every day. A tasting menu here is an eye-watering £250.

Chef Andrew Wong made an immediate splash with his immaculate Chinese cooking, and now he and his eponymous restaurant made the jump from one star up to two in 2021. The ‘Taste of China’ menu – costing £160, with a recommended dinner time of three hours – jumps out as the one to try.

Da Terra translates to ‘on the ground’, in a reflection of chef duo Paulo Airaudo and Rafael Cagali’s Latin American and Italian roots. The ‘Long Tasting’ menu is ten courses and £175 a head, but if you’re looking for a snappier meal, you can tuck the £78 short pairing into a work break easily enough.

Every meal is a story, and that’s especially true here. Chef Tom Sellers uses seasonal British produce to create his intricately linked tasting menus, and nets a second star just shy of eight years after opening the doors to this excellent spot. The current tasting menu is 10 courses and costs £185 and takes up to three hours. Yum!

This famed Old Street restaurant sits within the Grade II-listed Shoreditch Town Hall, and has made the leap from one to two Michelin stars. Chef Patron Isaac Mchale runs a seasonal menu of modern and elegant produce which is set at £145, but you can grab yourself a lunchtime set menu for £65.

The second of the two London restaurants to be upgraded from one to two stars this year is Ikoyi. Head chef Jermemy Chan presents a stunning seasonal menu with a foundation in west African cuisine. The full deal will cost you £180, but their lunch menu comes in at £60. 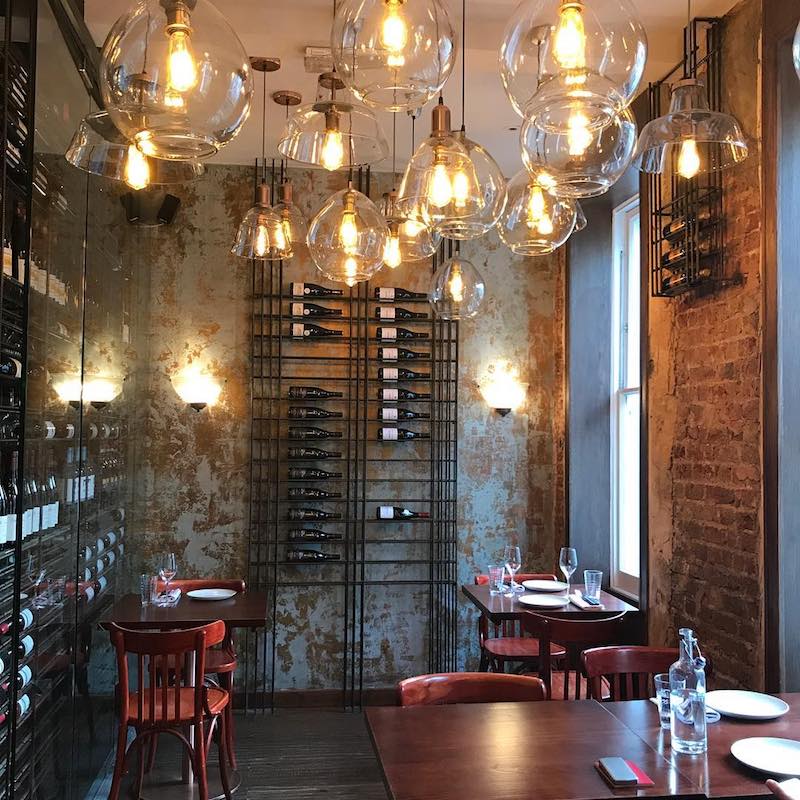 Lyle’s, Shoreditch: spartan dining room, with a four-course, no-choice menu for £55.
Brat, Shoreditch: Tomos Parry’s Welsh-Basque spot has won near-universal praise.
Leroy, Shoreditch: the restaurant formerly known as Ellory maintains one star for their range of British plates
Galvin La Chapelle, Spitalfields: the brothers from the aforementioned ‘Windows’ deliver fine French food in a dramatic, high-ceilinged setting.
Mãos, Shoreditch: guests are invited to move through the kitchen, wine and restaurant spaces to mirror the culinary freedom of the Portuguese tasting menu.
Behind, Hackney: 20 days of service was enough to get this spot, opened in the first lockdown, a star.
Cornerstone, Hackney Wick: Chef Tom Brown (whom you may have seen on a Secret London IG live during the first lockdown) earns a well-deserved first star.
Casa Fofo, Hackney: Another new entry in the East, one which relies on local suppliers.

Elystan St, Chelsea: ‘pure, seasonal, ingredient-led, gimmick-free dishes’, they say.
Five Fields, Sloane Square: dashing, dainty cooking from the English garden.
Harwood Arms, Fulham: gastropub that serves up an infamous Sunday roast.
River Café, Hammersmith: esteemed, genre-defining Italian restaurant down by the Thames.
La Trompette, Chiswick: head west for modern French cooking.
Kitchen W8, Kensington: neighbourhood restaurant puts out ‘modern English with a French soul.’
The Glasshouse, Kew: combine with the beautiful nearby Gardens for a pre-Prandial stroll
Endo at the Rotunda, White City: a 16-seater sushi counter made of two hundred year wood, located at the top of the landmark BBC Television Centre where you can enjoy ‘sushi in the clouds, where the sea meets the sky’.