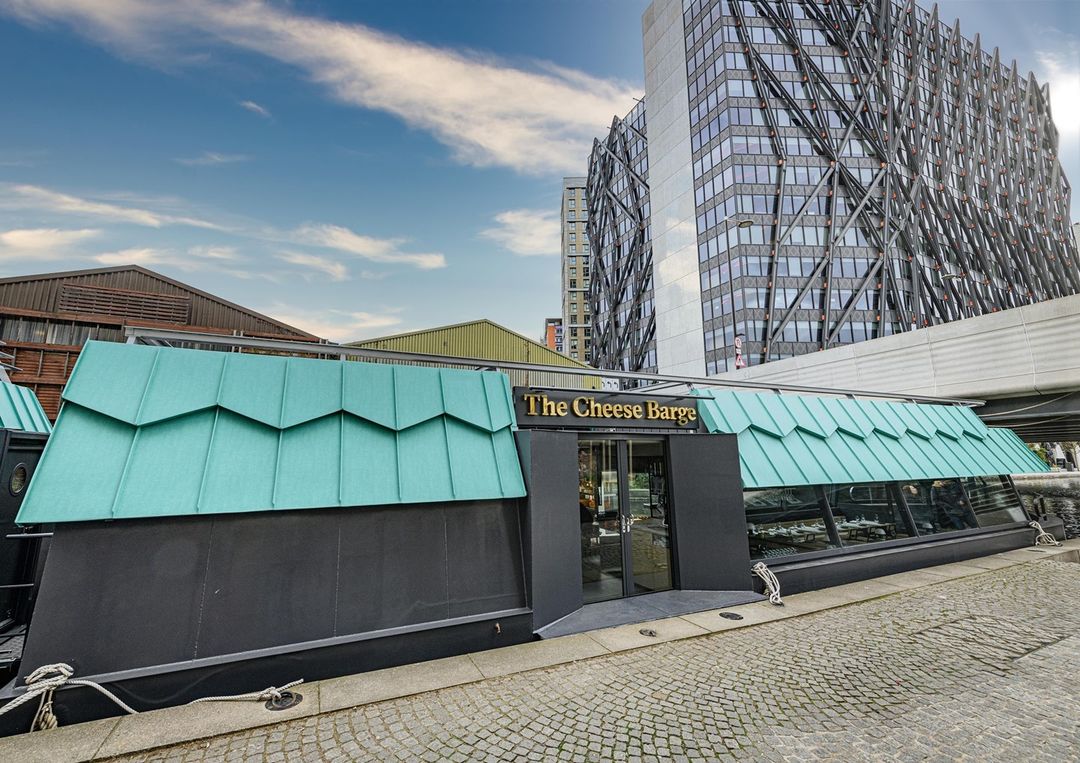 Bobbing into town (and our hearts), The Cheese Barge is the boat that roqueforts.

Candidly, I think that if you’re the person who brought London’s cheese conveyor belt restaurant Pick and Cheese to town, you’ve done your bit for humanity and deserve a good long rest. The man in question – The Cheese Bar founder Mathew Carver – is clearly not of the same mind, however, for he’s now unveiled a floating temple of fromage in Paddington, named The Cheese Barge. It’s open now (having been delayed several months by the coronavirus pandemic), and oh my, would you just look at it!

A double-decker barge modelled on the marine-inspired Electa bookstore in Venice, The Cheese Barge was forged in the fires of a Somerset boatyard. It’s moored securely in the Paddington Basin, and has made waves in the restaurant scene by serving seasonal dishes that hero the very best of British cheese.

That results in plates such as Windrush Goats’ Curd with lamb scrumpets and pickled walnuts, and Cropwell Bishop Stilton ‘Devils on Horseback’, which are medjool dates stuffed with Stilton and wrapped in bacon. In a nod to the local area, meanwhile, you’ll be able to tuck into ‘Maida Vale’, a washed rind cheese served on treacle soda bread, and supplemented with smoked mackerel and green sauce. A rather addictive-sounding snack – Quicke’s Cheddar curds, which are curried and tossed in chilli honey – should prove popular too.

Diners with a bigger appetite can indulge in sharing plates, foremost amongst which is a half-kilo of Baron Bigod cheese, made specially for The Cheese Barge and baked to order. The team have also created their own house sausage (made with Young Buck blue cheese, naturally), and will recommend individual cheese and side pairings, such as St Andrews Cheddar with green kimchi.

The sweet stuff takes the form of delicacies including a Yorkshire Curd Tart, and a Malted Milk Chocolate Cremeux, which will round off the meal nicely. There’s a forty-seat dining room on the lower deck that looks lush, but I reckon you’d be best making a beeline for the open-air upper deck, where a plateful of fromage and a chilled glass of wine should cut through the haze of a summer day nicely.

All in all, The Cheese Barge looks absolutely swell. Truly, it’s the Mayflower of manchego, the Cutty Sark of cheddar, the Titanic of taleggio – erm, maybe not that last one…

You’ll find The Cheese Bar at Sheldon Square, Paddington Central,  from May 20 – find out more here.

Forget Wine, This Camden Restaurant Is Offering Up A Beer And Steak Pairing