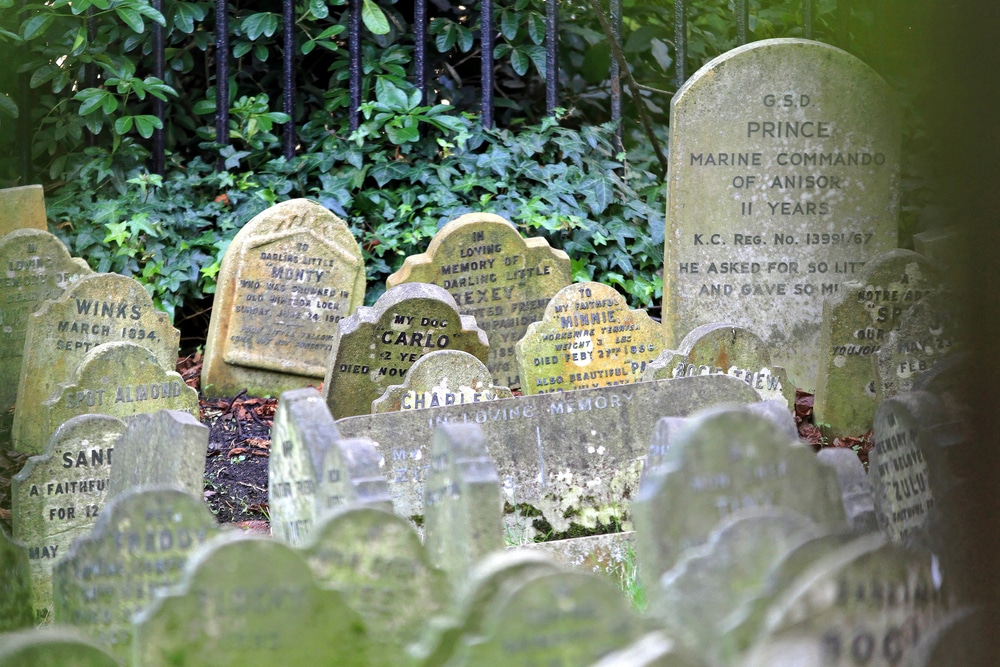 Hyde Park is where you’ll find Britain’s first pet cemetery but beware, it may be haunted…

Nestled within the bushes of Victoria Gate Lodge’s garden is the secret pet cemetery of Hyde Park. This pint-sized graveyard was the first of its kind in Britain and dates all the way back to the 1880s. Dogs, cats, birds and even monkeys were buried here. When it closed in 1903, there were over 300 tiny tombstones in the garden and they’re still standing today!

SEE ALSO: This Beautiful Graveyard Is A Wonderful Spot For A Wonder

The story of how it came to be is also quite fascinating. Back in the day the gatekeeper, Mr. Winbridge, allowed some of his friends to bury their beloved Maltese Terrier, Cherry, in the garden. Several Londoners caught wind of the burial and travelled far and wide to give their pets the send off they truly deserved. It eventually became the unofficial graveyard for pets with Mr. Winbridge dedicating more and more land to the cause.

Rumour has it the cemetery is haunted by the spirits of the animals, many of which suffered extremely tragic deaths. In fact, several dogs were trampled to death by the horses that used the park carriageways, and some were even murdered! One tombstone reads ‘Remembering Fritz and Balu – poisoned by a cruel Swiss’. I have so many questions…

You thought human ghosts were bad? Just you wait.

Haunted or not, the graveyard is actually very quaint and somewhat peaceful. If you are brave enough to venture inside, you’ll come across dozens of sentimental messages engraved on the tombstones, such as ‘Darling Doll – my sunbeam, my consolation, my joy’ and ‘Alas! Poor Zoe’. You may also spot some interesting pet names including Bogie, Smut and even Scum. Each to their own, I guess.

The cemetery usually offers walking tours for the general public but under the current circumstances, virtual tours will be offered instead. You can still learn all about the burial ground but from the safety of your own home. The next tour is on October 28 and you can book here.

In other spooky news, here are 13 of the most haunted places in London.

Christmas, City of London News, lights, Things To Do In London, winter

16 Twinkling Christmas Lights Displays To See In London In 2020

City of London News, classical music, halloween, Things To Do In London