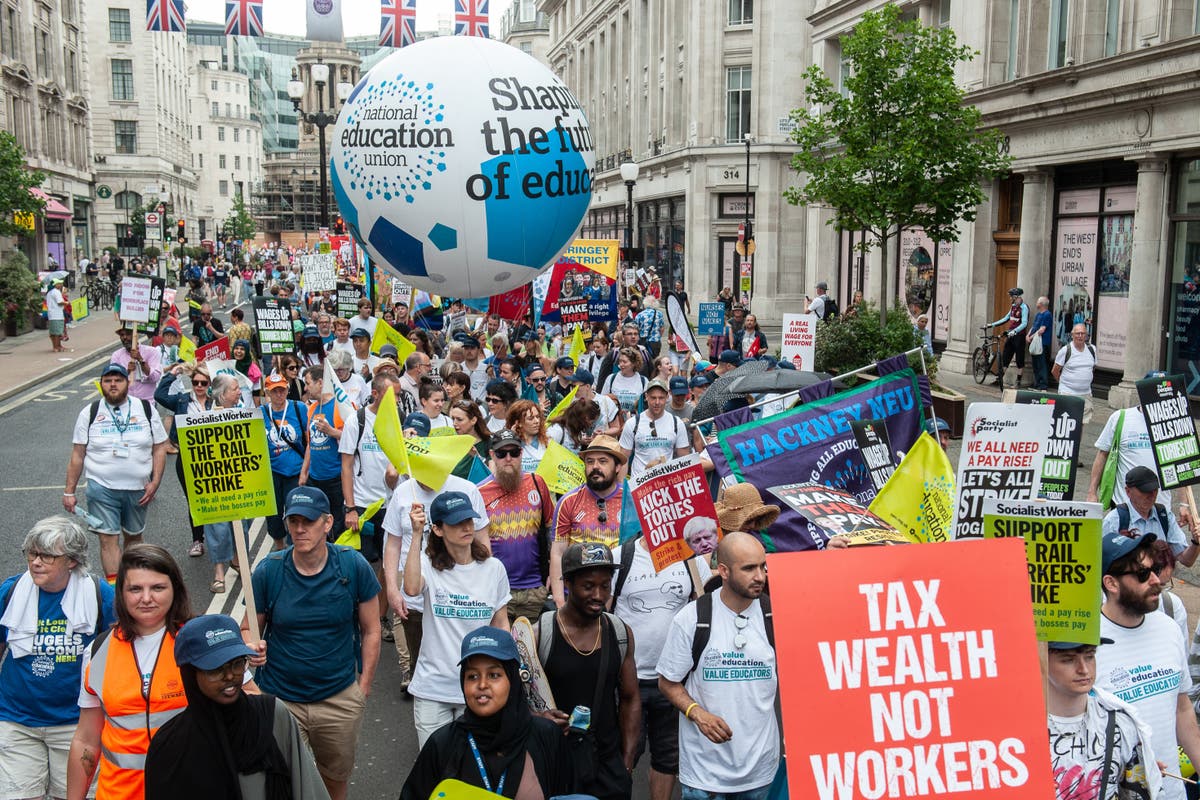 housands of people gathered in central London to protest against how the Government has handled the cost of living crisis.

With prices surging across the UK, trade union leaders joined frontline workers and community organisations to call for increased aid.

Protesters marched from Portland Place to Parliament Square for the rally, and were joined by some political figrues such as deputy leader of the Labour party, Angela Rayner.

Banners at the protest read slogans such as “cut war not welfare” and “end fuel poverty, insulate homes now”.

Union leaders later gave speeches in Parliament Square to a crowd of thousands, calling for higher wages, increased taxes for the rich, better working conditions and in support of the Rail, Maritime and Transport (RMT) union strikes next week.

Frances O’Grady, general secretary of the TUC was met with applause and cheers as she gave a speech criticising the Transport Secretary and the Prime Minister.

She said: “I have seen the Transport Secretary Grant Shapps has threatened rail workers that they will strike themselves out of a job.

“Well you are wrong Mr Shapps: if you keep stirring, come the next election, you will be out of a job.”

Ms O’Grady added: “Let me say this to Boris Johnson, don’t you dare shift the blame for inflation onto working people.

“Don’t you dare, not after a decade of austerity, privatisation and pay cuts. Don’t you dare tell working families we have to put up with more pain.

“It is time to raise taxes on wealth not workers.”

Ahead of the march, The TUC said the cost of living crisis was having a severe impact on families with , adding: “Prices are skyrocketing, yet boardroom bonuses are back to bumper levels.

“Everyone who works for a living deserves to earn a decent living, but UK workers are suffering the longest and harshest squeeze on their earnings in modern history.

“If we don’t get pay rising across the economy, we will just keep lurching from crisis to crisis.

“This cost of living emergency has not come out of the blue. It is the result of more than a decade of standstill wages.”

In further comments, she went onto to accuse the Prime Minister of abandoning his committment to a “high-wage” economy.

Due to surging costs, David Butteress, the Government’s cost of living tsar said private companies must step in to help households.

He told the BBC: “If you think about all the money that’s spent on marketing and doing deals to promote some of the big leisure activities that the British people enjoy – let’s take some of that money.

“Let’s refocus it on what really matters to people which is making their prices more competitive so their money goes further and they can still enjoy a good day out as a family.”

This comes as the the Bank of England increased interest rates by 0.25 per cent to 1.25 per cent.

Inflation is also due to hit 11 per cent later this year, officials have warned, while fuel prices have reached £2 per litre in parts of the country.

Millions of households will receive a £326 payment on July 14, as part of the £650 payment for low-income households.