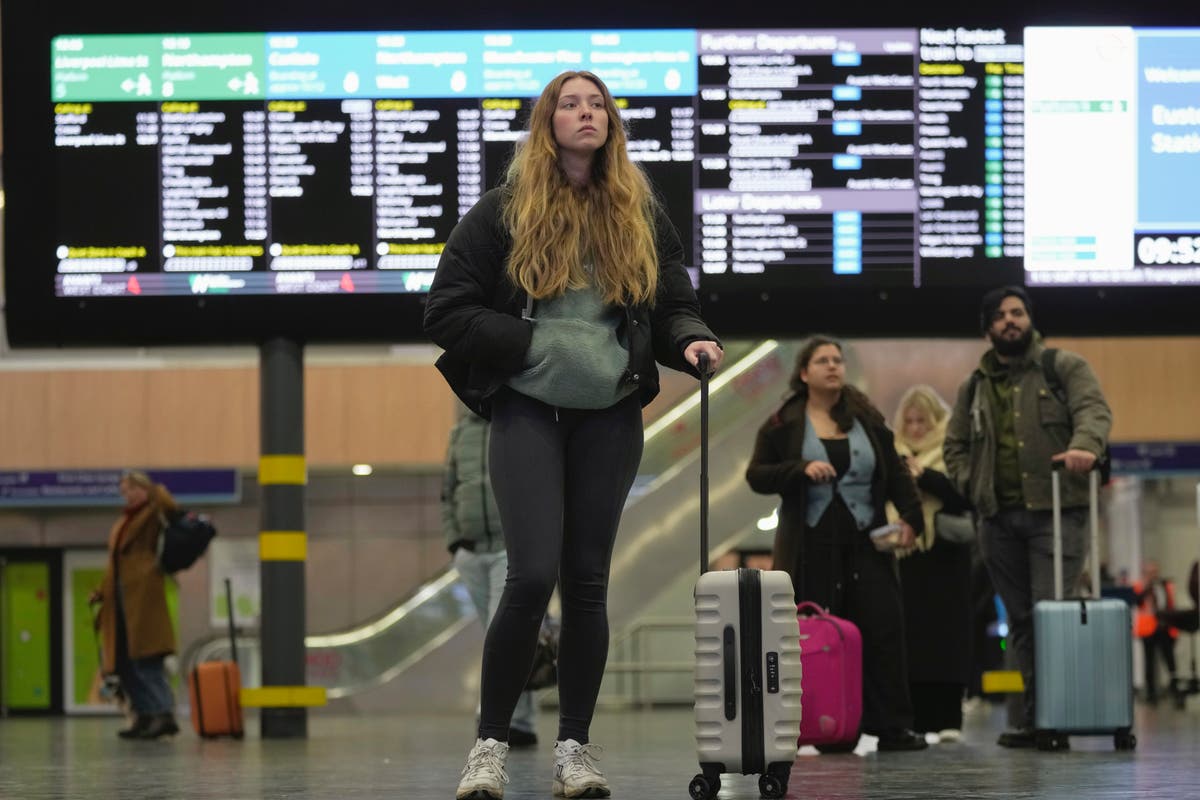 ondon commuters have vented their frustraton as they suffered a third consecutive day of travel disruption because of a strike by train drivers.

Services are being crippled by the walkout by members of Aslef at 15 rail companies in a long-running dispute over pay, with some areas having no trains all day.

There were no services on Thursday morning on Southeastern, Thameslink, Great Northern or Avanti West Coast, while South Western Railway and Greater Anglia were limited to skeleton services into Waterloo and Liverpool Street.

Victoria, normally one of the busiest stations in the county, was closed, with no Southern or Gatwick Express trains running. Passengers there described the situation as a “nightmare” and “bad for Britain” – and accused the unions of “losing the plot” over the “selfish” strikes.

Meanwhile the Government announced it will be introducing a bill to Parliament in the next few weeks to “ensure minimum safety levels” during industrial action for services including fire, ambulance and rail.

Unions and the Labour Party have condemned the proposed legislation, saying it is “a desperate act” and “an attack on working people”.

The RMT is staging another 48-hour strike from Friday in its bitter dispute over jobs, pay and conditions.

That’s all for our live coverage tonight. Check back in the morning.

Unite union: Government’s bill ‘no more than a smoke screen’

Responding to the Government announcement on strikes Unite general secretary Sharon Graham said: “This offer of so-called ‘pay talks’ from the government is game playing of the highest order. It is nothing more than a smoke screen.

“The idea that we would call off industrial action on current pay issues in order to discuss the Government’s 2023/24 evidence to the Pay Review Body is frankly beyond a joke.

“It is not even jam tomorrow.”

A senior employment lawyer has said the Government’s proposed strike bill could be shortlived, even if it is passed in Parliament.

Tom Long, employment partner and industrial relations specialist at law firm, Shakespeare Martineau, said: “Aside from the fact that trade unions will be unlikely to accept it without a fight, it may take months to go through parliament and even if passed, the Labour Party have been vocal about their intention to repeal it if they are elected in the next two years.

“Designed to protect minimum service levels, the current legislation is limited to what the Government considers ‘important public services’, such as nurses and the fire service, so will have no immediate effect on businesses outside of these areas.

“However, it could be argued that those ‘important public services’ are areas where the Government could be held responsible for the knock-on effects of strike action, for example delayed operations and hospital appointments.”

The shadow future of work secretary said: “It’s insulting to key workers that Rishi Sunak thinks that threatening teachers and nurses with the sack will end strikes.

“At every stage the Government has sought to collapse talks and throw in last minute spanners. Now the Prime Minister is wasting time on shoddy hurdles that even his own Transport Secretary admits won’t work.”

Business Secretary Grant Shapps rejected the suggestion that a planned new law on minimum safety levels would impact on the human rights of trade union members.

He told broadcasters: “First of all, civilised European nations, France, Germany, Italy, Spain, they all have some form of minimum safety levels.

“The idea that there may not be an ambulance coming because there’s a strike on, I think, is unacceptable.

“We’re not proposing to go the full hog. Other countries, parts of America, Canada, Australia, they have legislation which bans those blue lights entirely from going on strike.

“We’re not proposing that. I think it’s very reasonable what we’re suggesting but I think the time has come and it brings us into line with other European nations.”

What is the Government’s proposed strike bill?

The Government announced it will be introducing a bill to Parliament in the next few weeks which, it says, will ensure minimum safety levels during industrial action for services including fire, ambulance and rail.

Business Secretary Grant Shapps said in a written statement: “As has been demonstrated over the last year, wide scale and repetitive industrial action can act as a major blockage to economic growth by preventing people from getting to work.

“Introducing the safety net of minimum service levels to ensure that the public are not put at risk during strike action is the best way of balancing the ability to strike, while protecting the wider public.

“This package of measures will see the UK align with many countries across the world such as France and Spain that already have minimum service agreements in place.

“Today’s reforms follow a change in the law made by the Government in July 2022 enabling businesses to provide skilled agency workers to fill vital staffing gaps caused by industrial strike action.”

Unions have responded to the Government’s planned new law on minimum safety levels during industrial action for services including fire, ambulance and rail.

A GMB spokesperson said: “This is a desperate act by the Government, who are trying anything to divert attention from the chaos they have created from 13 years of failure in our public services.”

Fire Brigades Union general secretary Matt Wrack said: “This is an empty offer from the Tory government, and a meaningless stunt from Grant Shapps.”

Meanwhile Public and Commercial Services union general secretary Mark Serwotka said: “Just when you thought the Government could go no lower, ministers say they’re looking to deal with strikes by making them illegal, rather than negotiate with unions.”

Responding to the Government’s plans to introduce new legislation on strikes, TUC general secretary Paul Nowak said: “This is an attack on the right to strike. It’s an attack on working people, and it’s an attack on one of our longstanding British liberties.

“It means that when workers democratically vote to strike, they can be forced to work and sacked if they don’t. That’s wrong, unworkable, and almost certainly illegal.

“The announcement offers nothing more to help with this year’s pay and the cost-of-living crisis. The only offer of talks is for next year. But we need to resolve the current disputes and boost the pay of public sector workers now.

The six-month stalemate between striking rail workers and the Government is holding back progress on green transport, according to a union boss.

He added that a lack of investment in the railways and increased train fares have caused commuters to opt for less eco-friendly modes of transport like driving.

Asked whether the ongoing dispute is stopping rail leaders improving green transport, Mr Whelan said he “couldn’t see how” ministers will be able to deliver climate change targets without “putting rail at the centre” of their policies.

Government pressing ahead with anti-strike legislation

The Government is pressing ahead with plans to introduce new legislation for “minimum safety levels” during industrial action.

The Business Department announced that a Bill will be introduced in Parliament in the coming weeks to ensure that vital public services will have to maintain a “basic function” when workers go on strike.

Minimum safety levels will be set for fire, ambulance and rail services and the Government said it will consult on the “adequate level of coverage” for these sectors.

The announcement was made amid a wave of strikes, including a walkout by train drivers on Thursday which crippled rail services.

Unions reacted with fury to the move, saying it would do nothing to resolve the disputes breaking out across the country every week.