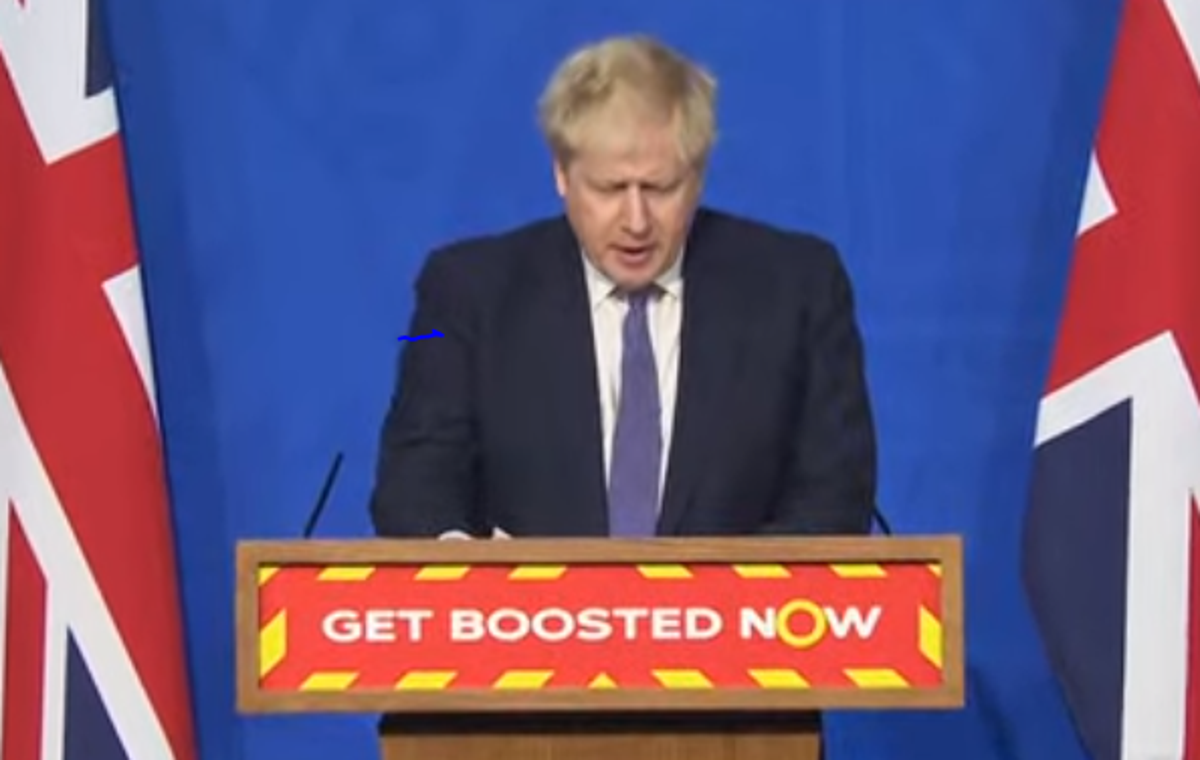 oris Johnson has told a Downing Street press conference that the UK has a “chance” to ride out the wave of Omicron infections without needing a further lockdown.

WHO Incident Manager Abdi Mahamud said that “more studies” were “pointing out that Omicron is infecting the upper part of the body” and not causing severe disease such as pneumonia.

Meanwhile a string of NHS trusts around the country were declaring “critical incidents” amid staff shortages and rising pressures due to Covid-19.

A health boss said that hospital admissions due to Covid have “plateaued” in London but are rising across the rest of the UK.

Matthew Taylor, chief executive of the NHS Confederation, said there “may be a second peak after the new year” as figures showed admissions falling from a peak of 500 in the capital on December 29.

Boris Johnson: “Chance extra Covid restrictions will not be needed in England”

Boris Johnson said, despite the high number of coronavirus cases being recorded in the UK, there was a “chance” extra restrictions would not be needed in England.

He added: “First, we now know that Omicron is milder than previous variants, so while hospital admissions are rising quickly, with over 15,000 Covid patients now in hospital in England alone, this is not yet, thankfully, translating into the same numbers needing intensive care that we saw in previous waves.

“Second, thanks to the fantastic national effort to get Britain boosted, we now have a substantial level of protection, higher than any of our European neighbours, with over 34 million boosters administered, including in England reaching more than 90 per cent of the over 70s and 80 per cent of the over 50s.

“And so, together with the Plan B measures that we introduced before Christmas, we have a chance to ride out this Omicron wave without shutting down our country once again.

“We can keep our schools and our businesses open and we can find a way to live with this virus.”

Speaking at a press briefing in Downing Street, the PM added: “Our United Kingdom is in the midst of the fastest growth in Covid cases that we’ve ever known.

“Previous waves of the pandemic didn’t have a single day with more than 100,000 new cases reported, one day last week we had 200,000 people test positive.

“And the latest figure today is another 218,000, though that includes some delayed reports.”

Boris Johnson said in his live TV address to the nation that after more than 200,000 positive tests in 24 hours: “Anyone who thinks our battle with Covid is over, I’m afraid is profoundly wrong.

“This is a moment for the utmost caution,”

Professor Ian Young said he expects to see the peak of case numbers in the Omicron surge coming in early to mid January.

In terms of hospital admissions and occupancy he said expects to see a peak in mid-late January.

Meanwhile he said the Delta variant is still circulating in the community but numbers have been falling steadily.

There were 1,881 Covid-19 hospital admissions in England on January 2, NHS England said.

During the second wave of coronavirus, daily admissions peaked at 4,134 on January 12.

In London, 347 admissions were reported on January 2, down 7% week on week.

3,993 people in London hospitals with Covid-19, highest number since February

A total of 15,044 people were in hospital in England with Covid-19 as of 8am on January 4, according to figures from NHS England.

This is up 58% from a week earlier and is the highest number since February 18.

During the second wave of coronavirus, the number peaked at 34,336 on January 18.

A further 218,724 lab-confirmed Covid-19 cases have been recorded in England and Scotland as of 9am on Tuesday, the Government said, the first time the figure has been over 200,000.

The Government also said a further 48 people had died in England within 28 days of testing positive for Covid-19.

Separate figures published by the Office for National Statistics show there have now been 174,000 deaths registered in the UK where Covid-19 was mentioned on the death certificate.

Tuesday’s figures contain some delayed reporting of cases because of the holiday period.

Plymouth’s Derriford Hospital has declared a major incident after nearly 500 staff were absent due to Covid-19.

“This morning we communicated to our staff that we are operating in an internal critical incident,” she said. “This is due to the high pressure on urgent care services and increasing demand for Covid-19 beds.

“We currently have 99 Covid-19 positive patients across Derriford and our three community hospitals and just under 500 staff absent for Covid-19-related reasons.

“We don’t want people to be alarmed by this. We took the decision to escalate to the highest level of internal incident because this allows us to be able to take additional steps to maintain safe services for our patients and help us cope with the growing pressures.

“We are running at extremely high levels of occupancy and like a number of other hospitals across the country, we are seeing huge rises in demands for our services at the moment. Attendances in our emergency department are high; there are ongoing challenges in discharging patients who are well enough to leave hospital, and we are seeing an increase in staff sickness, all of which leads to longer waits than we would like for patients to be seen and admitted.”

NHS England is urging people to come forward for a booster jab as more than two million appointments are still available over the next week.

The NHS added there is “plenty of capacity” for those who have so far been unable to come forward because they have had Covid.

Anyone who has had Covid must wait 28 days before being able to have a booster.

Dr Nikki Kanani, deputy for the NHS Covid-19 vaccination programme, said: “There are more than two million appointments available for you to get your booster over the next seven days alone, with more slots popping up all the time, meaning everyone can find a time and place that’s convenient for them. If you haven’t yet had your booster, please do come forward, as we know this provides the best protection from the Omicron variant with trusted healthcare professionals on hand to answer any questions you may have.”

Separate figures published by the Office for National Statistics show there have now been 174,000 deaths registered in the UK where Covid-19 was mentioned on the death certificate.

Tuesday’s figures contain some delayed reporting of cases because of the holiday period.