Should we be dreaming of a White Christmas in London?

Perhaps it’s a little snowverrated, but you’d have to admit that a white Christmas in London this year would be quite something. Come on Brrrritain, give us something to shout about this year!

Admittedly, this actually happening in the Big Smoke is largely just a fantasy each year, but that doesn’t stop us dreaming. Usually, the Winter Wonderland in Hyde Park – as opposed to the real icy, snowy covered streets – is all we get during the festive season, with snow usually showing itself in, I don’t know, February?

But will it be different this year? Let’s find out… *Drumroll please*.

Will London get a white Christmas this year?

According to AccuWeather, temperatures will drop between now and Christmas day, but the closest thing we’ll see to snow is, *sigh*, the rain. Christmas Eve and Christmas Day are set to enjoy nippy highs of 8°C and 6°C, respectively, with showers scattered throughout each day. 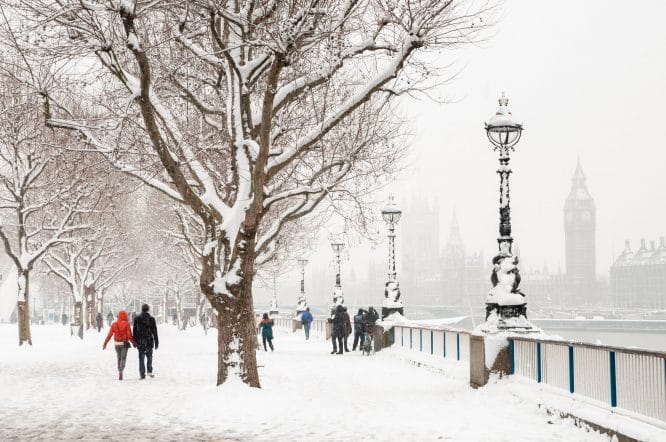 But you know what they say. Anything can happen, so we’re holding out for an unexpected drop just cold enough to give us a picturesque snowfall on December 25. Just like the ones I used to know see in films but never witness in London.

In anticipation of the lack of white Christmases in London, a few places have actually just said “f*ck it, we’ll do it ourselves”. Looking at you, Covent Garden, The Shard, and Brent Cross. There’s still time to enjoy a dusting of snow in the city, but sadly, it doesn’t look like it’ll quite be the real deal.

200 Fantastic Free Things To Do In London

A Magical Immersive Chocolate Factory Will Open In London This Year