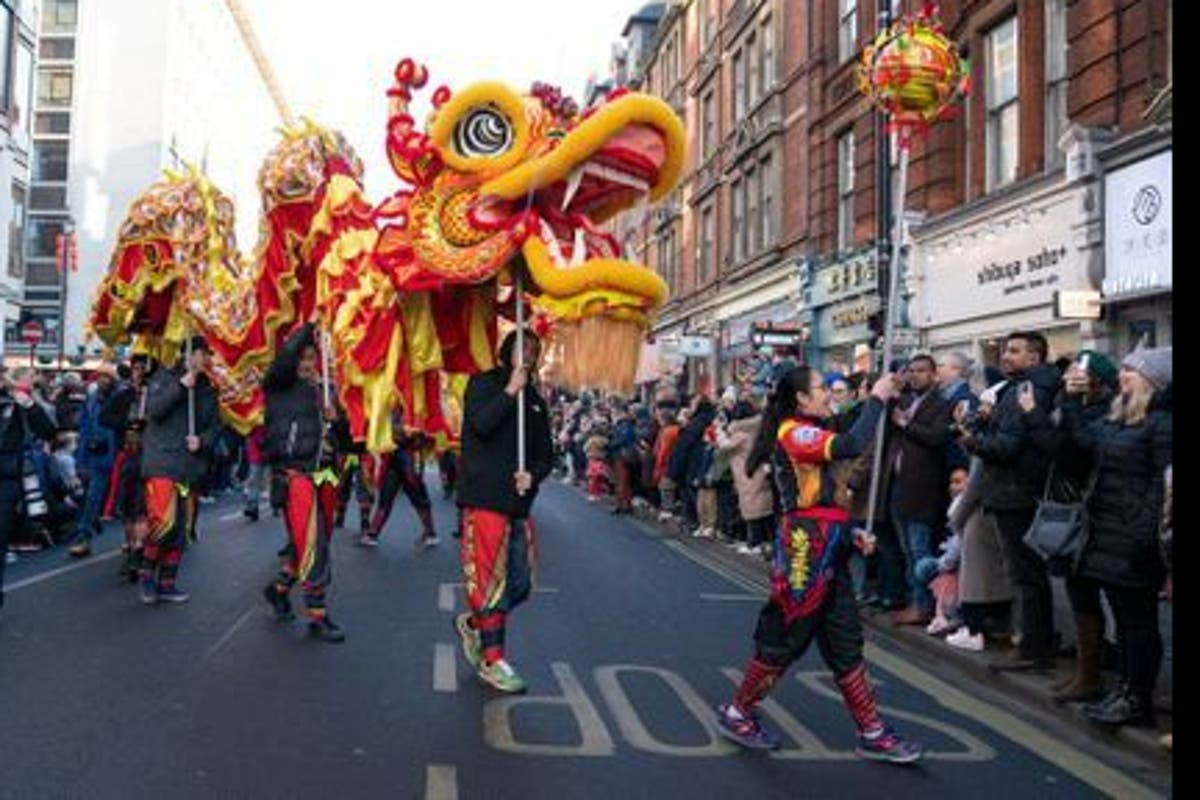 ens of thousands of people have flocked to the West End to celebrate the start of the Lunar New Year.

The main parade in the capital began in Charing Cross Road before going through Shaftesbury Avenue and ending with the lion eye-dotting ceremony in Trafalgar Square.

Revellers watched on in delight as performers dressed in colourful costumes and floats took part in the parade.

The event is the biggest Chinese New Year celebration outside of Asia.

Lunar New Year is a special time for families all over the world and is the most important holiday in China.

This year, the festival falls on 22 January and marks the start of the Year of the Rabbit.

People across China rang in the Lunar New Year on Sunday with family gatherings and crowds visiting temples after the government lifted its strict zero-Covid policy.

The event marked the biggest festive celebration since the pandemic began.

With the easing of most Covid-19 restrictions, many people could finally make their first trip back to their home towns to reunite with their families without worrying about the restrictions of quarantine, potential lockdowns and suspension of travel.

Larger public celebrations also returned for what is known as the Spring Festival in China, with the capital hosting thousands of cultural events – on a larger scale than a year ago.

The mass movement of people may cause the virus to spread in certain areas, said Wu Zunyou, the chief epidemiologist at China’s Centre for Disease Control.

But a large-scale Covid-19 surge will be unlikely in the next two or three months because about 80% of the country’s 1.4 billion people have been infected during the recent wave, he wrote on the social media platform Weibo on Saturday.

In Beijing, many worshippers offered morning prayers at the Lama Temple but the crowds appeared to be smaller compared to pre-pandemic days. The Tibetan Buddhist site allows up to 60,000 visitors a day, citing safety reasons, and requires an advance reservation.

At Taoranting Park, there was no sign of the usual bustling New Year food stalls despite its walkways being decorated with traditional Chinese lanterns. A popular temple fair at Badachu Park will be back this week, but similar events at Ditan Park and Longtan Lake Park have yet to return.

In Hong Kong, revellers flocked to the city’s largest Taoist temple, Wong Tai Sin Temple, to burn the first incense sticks of the year. The site’s popular ritual was suspended for the last two years due to the pandemic.

Traditionally, big crowds gather before 11pm on Lunar New Year’s Eve, with everyone trying to be the first, or among the first, to put their incense sticks into the stands in front of the temple’s main hall.

Worshippers believe those who are among the first to place their incense sticks will stand the best chance of having their prayers answered.

Local resident Freddie Ho, who visited the temple on Saturday night, was happy that he could join the event in person.

“I hope to place the first incense stick and pray that the New Year brings world peace, that Hong Kong’s economy will prosper, and that the pandemic will go away from us and we can all live a normal life,” Mr Ho said. “I believe this is what everyone wishes.”

Meanwhile, the crowds praying for good fortune at the historic Longshan Temple in Taipei, the capital of Taiwan, were smaller than a year ago even as the pandemic eased. That is partly because many people there had ventured to other parts of Taiwan or overseas on long-awaited trips.

It comes as 10 people were killed and 10 more were injured at a mass shooting at Monterey Park in California.

The shooting came after a Lunar New Year festival with police saying the suspect was still at large.